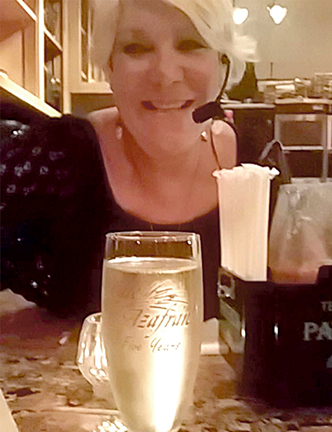 Every table is full. Each bar stool occupied. Pianist John Flynn is tickling the ivories and everyone’s favorite chanteuse Holly Lane is behind the bar, serenading the crowd all the while mixing drinks. Shookah, shookah, shookah—her cocktail shaker doubles as a percussion instrument and she never misses a beat. The tourists might be gone for the summer but you’d never know it at Café Azafran on Baltimore Avenue. The joint is jumping.

“Chanteuse” might not be the precise word to describe Holly Lane, a woman of many talents and a fixture in the Rehoboth Beach restaurant, bar, and jazz scene, but I’m hard pressed to find one I like better after chatting with her for the purpose of this column.

Holly Lane—yes, that’s her real name—discovered her passion early on in life. As a little girl growing up in Maryland just over the Washington, DC, line, she played dress up in her mother’s petticoats, singing and dancing in front of the television set along with the McGuire Sisters on The Arthur Godfrey Show. Ballet lessons followed, then enrollment in the Academy of the Washington School of Ballet where her idol Shirley MacLaine had studied before going to Broadway.

After a couple of stints with modern dance troupes, Holly rolled the dice and landed a job at Le Cabaret in the Paradise Island Casino in the Bahamas. It was the beginning of a very jet set lifestyle that took her to Martinique, St. Barth’s, Switzerland, Greece, and finally to Paris, where she stayed for fifteen years.

The City of Lights nurtured the soul of the young chanteuse—the food, the wine, the secret gardens, and, of course, the cabarets. Cabaret life for Holly meant grabbing an espresso around 8 p.m., putting on a show at 10 p.m., and then prowling the streets of the St. Germain des Près neighborhood with her cohorts in search of late night drinks and supper in an underground speakeasy or an African restaurant where the chicken dinners were cheap and the jazz musicians plentiful.

After twenty years abroad and a marriage gone bad, a little voice in the back of Holly’s head began whispering to her “il est temps de rentrer” (time to go home). She listened, said her goodbye to Paris, and returned back to Washington in 1995. Wouldn’t you know she promptly fell in love with a Frenchman who owned a beautiful restaurant called La Ferme in Chevy Chase, Maryland. After his untimely death, Holly decided to roll the dice again and move full time to Rehoboth Beach where she’d vacationed as a child and where her parents owned a beach house. They now live full time in Rehoboth, both 94 years old.

Once in the Nation’s Summer Capital, it didn’t take long for Holly to discover Sydney’s, the beloved former nightspot for jazz and haute cuisine and one of the places that helped propel the town to the mecca of sophisticated dining it is today. At Sydney’s, Holly met Shore Jazz, the band she worked with for ten years on a regular basis. They recorded two CDs and still do the occasional gig together. Along the way, she opened a catering business called Divalicious, from soup to song. Get it? Ask her sometime for her Portobello mushroom lasagna recipe….

Holly began her current job with Café Azafran in 2010. That’s just about the time our happily single gal became a mom. Okay, I admit that’s a bit of a provocative line. But it’s sort of true. A friend called up Holly to explore whether or not she might take in a rescue dog, a Chihuahua Beagle mix, a “Cheagle.” No, Holly replied, she didn’t want a pet. But she’s got long legs, blonde hair…and she’s feisty and independent like you, her friend countered. Well, you guessed it. Holly took a chance and she and JuJuBe have been inseparable since. In fact, Holly will tell you getting JuJuBe is one of the three best things she ever did, along with quitting smoking and leaving her husband.

Another thing she’s proud of is the gig she and good friend John Flynn put together three years ago for Café Azafran. It was awkward at first, Holly told me, trying to shake cocktails and sing at the same time. But that’s because she was using a handheld microphone. Once she got practical and bought a headset, everything just fell into place.

The duo is a fan favorite at the café on Thursday nights all year long where they perform everything from the Beatles to Edith Piaf. The rest of the weekend you’ll find Holly behind the bar shaking up Cosmos, Martinis, and a few special cocktails of her own creation, including one she calls “St. Germain des Près” in a nod to her old Parisian stomping ground. It’s a mix of Grey Goose vodka, St. Germain liquor, and lemon juice. The proportions, though, remain a secret. Shookah, shookah, shookah!

In case you’re wondering, about the Rehoboth Jazz Festival weekend, October 15-18, John Flynn and Holly Lane will perform on Thursday night at Café Azafran. On Friday and Saturday of the Festival, Holly will put down her cocktail shaker, step out from behind the bar, and create with pianist Bob Diener, a one of a kind cabaret experience for Café patrons.

When I asked Holly if she missed Paris, she gave me a sweet smile and a slight wave of the hand. “Je ne regrette rien,” she replied. Spoken like a true chanteuse.

Holly Lane, you might be interested to know, was voted best Rehoboth bartender by the Washington Blade for 2014. Café Afrazan celebrated its five-year anniversary earlier this year in July.