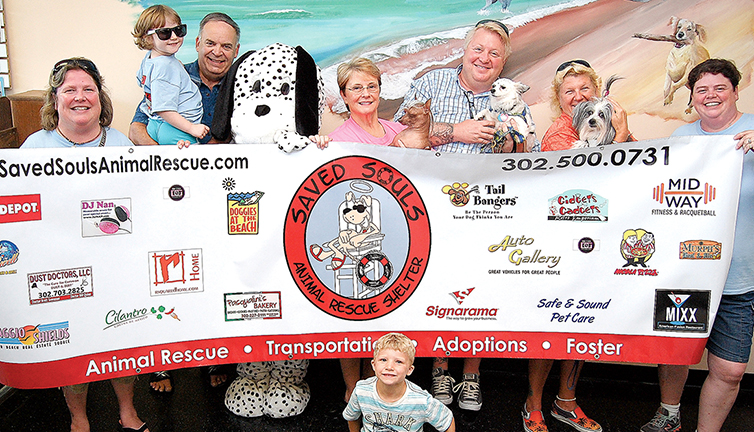 Saving Souls: One Animal at a Time

Founded in 2014 by Nicole Strike (Founder/ President) and Tammy Harman (Vice President), Saved Souls Animal Rescue is a 501c3 organization devoted to saving animals from overcrowding and or high kill shelters in many states. “We started this rescue initially because of animals being euthanized through gassing, (ended in March 2015 in NC) but still happens in other states in the United States,” said Strike. Strike continues, “We rescue dogs from overcrowded and high kill shelters throughout the United States. We may not be able to save them all, but we are going to save as many as we can. Each one saved, is one that you made a difference for.”

This local organization is taking huge strides in rescue relief. Located in Rehoboth Beach DE, Nicole and her group of animal advocates are working tirelessly at pulling animals from high kill shelters before it is too late.

“When you get the right group of people together, things work. When you get dedicated hard working people together, animal’s lives are saved, and that’s the point. That’s the reward. There is nothing better than a happy ending for an animal whose future was uncertain just weeks earlier. It never gets old,” Beverly Plunkett Parker, (Foster/Adoption Coordinator), stated among an array of puppies that were pulled last week from South Carolina and West Virginia.

Many local businesses have helped in the evolution and development of Saved Souls. Lisa St. Clair, owner of Tail Bangers, and Amanda Davis rescued ten dogs in South Carolina where their future would have consisted of most likely death in a gas chamber. These dogs were welcomed with open arms at Saved Souls and are currently available for adoption. Jim Reiter and his staff of Doggies at the Beach assist in fostering, adoption events, and socialization of the animals in the rescue. “Sign-A-Rama has helped tremendously with advertisement,” said Strike. “Gwen Osborne and Katie Handy have helped in so many ways. The more we grow as an organization, the more animals we can save!”

For ways to get involved or for more information, contact Saved Souls Animal Rescue at 302-500-0731.