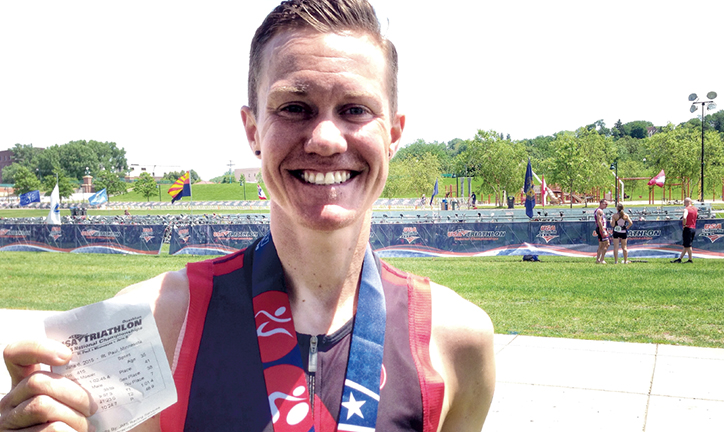 GO! Athletes Gets a Mentorship

Growing up in suburban Chicago, Chris Mosier had no FTM athletic role models. There were none at Northern Michigan University either, where—among many other activities— Mosier edited the school paper, performed as the Wildcat Willie mascot, led a service organization and played intramural sports.

But very quietly, Mosier has become the first openly trans man on a U.S. men’s national team (triathlon). His event—the run-cycle-run sprint duathlon—takes an enormous amount of time and energy.

His full-time job is assistant director of housing at a New York City-area university. But Mosier still manages to serve as executive director of GO! Athletes, a national LGBT student-athlete network. It’s an unpaid post, but he devotes many hours a week to it.

Now he’s taken on another task. GO! Athletes is rolling out a new and novel mentorship program. And Mosier is in charge.

The initiative was two years in the making. The rising number of openly gay athletes has had a snowball effect. More and more competitors (and coaches) are also considering coming out.

When an athlete comes out—particularly a big name—he or she is inundated with emails, texts and letters. There are plenty of congratulations—and lots of requests for advice.

“There’s a lot of informal mentorship going on,” Mosier notes. “We want to provide more structure and guidance to the process. And we want to make sure people can provide mentorship in manageable ways.”

The aim is to connect LGBT athletes (and coaches) with others—ideally, in their own sport or geographic area, and similar sexual, gender, racial and ethnic identity—who can help them deal with issues of sexual orientation or gender identity.

The need is profound. According to a January 2014 report by MENTOR, 89 percent of at-risk LGBT youth have never had a formal mentor—and 37 percent have never had any mentor at all. The figures are undoubtedly higher for LGBT athletes, because traditionally boys and girls in sports have had fewer role models than those in other activities. Thus, they are less likely to reach out for help—and less likely to have others reach out to them.

A 2012 report by Campus Pride found that one in four LGBT student-athletes in college are “pressured to be silent about their sexual identity among teammates, coaches, and other athletes.” They are three times as likely to experience harassment, compared to non-athlete peers. The report also found that they are unlikely to believe their administration or athletic department would support them.

Last year, GO! Athletes secured a grant to develop a pilot mentorship program, in the Delaware Valley. This year, the LGBT Sports Coalition gave its own funds, to build on those first steps.

GO! Athletes examined a variety of mentorship programs, in and outside the gay community. They hired a consultant who had done mentorship work at the University of Pennsylvania.

It was a time-consuming process, particularly for an all-volunteer group. Finally, though, the mentorship program is a reality. GO! Athletes is publicizing it through social media, and with outreach to athletic directors and athletic conferences, and through LGBT centers on college campuses.

Mentors are in the process of being trained. They’re learning how to ask open-ended questions. How to assess the situation at a school or campus that may be very different from their own. And how not to force any one particular outcome.

“The intention is not to get everyone to be out,” Mosier notes. “It’s just to talk through any situation a mentee may be facing, with someone who understands what they’re going through. And to provide options.”

There is no age limit, though most mentees are in high school or college. Mentors and mentees attending the annual LGBT Sports Coalition summit in Portland, Oregon each June will have the opportunity to meet face to face—if they haven’t already—at a GO! Athletes-sponsored reception.

Mentor applications have poured in from around the country. If there’s one common thread among the men and women hoping to become mentors, Mosier says, it’s this: “I wish I’d had a mentor. That would have been a game-changer for me.”

Chris Mosier knows that feeling well from his own life. Which is why, today, he’s mentoring GO! Athletes’ very remarkable arena of mentors.
To learn more about the mentorship program, and apply to be a mentor or mentee, click on goathletes.org/mentorship.