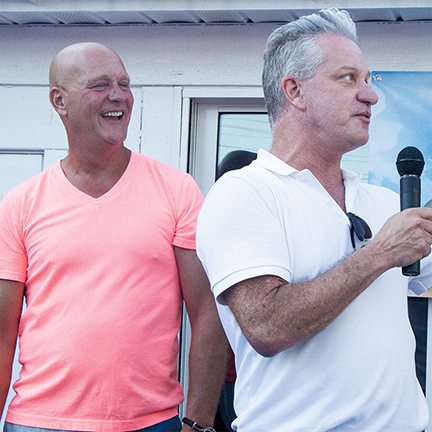 CAMP Rehoboth Volunteers Counting Down the Days to Sundance 2016

With its temporary 2016 setting in the Rehoboth Mall, Sundance is depending more than ever on volunteers to make it all happen. At a recent volunteer orientation session at the CAMP Rehoboth Community Center, the entire group of new volunteers agreed to join hundreds of others who take on the massive event. For information about volunteering contact Monica Parr. Sundance 2016 is made possible by the generous support of the many Sponsors, Supporters, and Host. For more about this year’s Sundance event, visit the Sundance page on our website. Tickets to Sundance 2016 are available online, or call CAMP Rehoboth at 302-227-5620. Volunteer photo: Russell Stiles, Patricia Stiles, Jim Chupella, Brad Lentz, Steve Clayton, Robert Croker, Charles Marino, Caitlyn Heavey, and Rob Jasinski. Run for Your Life! And in a Tutu Too!

The best part of the Sundance Racing Festival on Sunday, August 28, at 8 a.m, will be the amazing mix of people who show up to participate. From true athletes to casual walkers and those who just want to “sashay,” the Racing Festival kicks off Sundance week with a big dose of fun—and it’s healthy too! Costumes are encouraged, and tutus are never too much! Sign up at seashorestriders.com or the day of the event. Letters to Go - From A to Z

There’s no doubt about it, Letters from CAMP Rehoboth gets around, and this summer, happy “CAMPers” spanned the globe—and the alphabet! Its journey began in Denali National Park in Alaska with Phil Paterson, Ellen Paterson, Bob Hoffer, Max Dick, Jan Groninger, and Doc Johnston. Then it found its way to Zimbabwe with Donna Davis, Gail Jackson, John Cooley, and Tom Comer, shown in front of Victoria Falls. To submit travel photos for publication in Letters, don’t forget to pack a copy of it when traveling, and send high resolution photos to Steve Elkins.