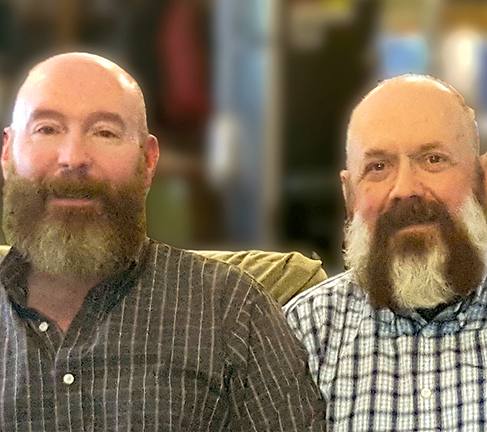 The Fight Against AIDS

30 Years After the First Diagnosis, Jim Welch and Ivo Dominguez Are Still Fighting the Good Fight

James C. Welch, Ivo Dominguez, Jr., and their four large dogs live in a geodesic dome-house in southern Delaware. The house is an appropriate metaphor for how HIV/AIDS treatment, recognition, stigma, and outlook have come full circle—well almost.

Jim and Ivo are pioneers in the history of HIV/AIDS in Delaware. In 1982, Ivo and Jim founded the Gay & Lesbian Alliance of Delaware (GLAD), establishing a Health Issues Committee and a statewide hotline. Ivo was the organization’s first president. Soon after, they initiated talks with the Division of Public Health and the Blood Bank of Delaware to discuss definitions of risk behaviors and future testing options for the state, helping both form policies regarding this new threat to public health.

GLAD became “information central” in regards to AIDS in Delaware. The organization trained Lesbian and Gay volunteers for a statewide AIDS hotline. GLAD then partnered with the Delaware Nurses Association to sponsor the first public AIDS educational forum in Delaware, which was held at Christiana Mall. They also worked to lobby New Castle County Council to pass a resolution in support of AIDS education.

On top of all the advocacy work, Jim and Ivo transported people with AIDS to various Delaware hospitals for care, when treatment was not available everywhere. It is important to note that all this took place long before the Route 1 bypass was constructed.

In 1984, Ivo proposed that GLAD spin off its Health Committee to form the Delaware Lesbian and Gay Health Advocates (DLGHA), Delaware’s first AIDS service organization. DLGHA incorporated a “buddy system” with the help of Ivo, Jim, and their friends Joan Schwartz and John Wills. These four were among the founding board members of DLGHA, which eventually became AIDS Delaware.

For perspective, in 1985 Ryan White was barred from school and Rock Hudson announced he was “dying of AIDS.” During that same year, Jim, an “out gay man,” was hired by the Delaware Division of Public Health as a nurse consultant at the Alternate Test Site program for HIV antibody testing, the state’s first official HIV/AIDS effort. Jim, Ivo, and Joan consulted on the opening of Delaware’s first comprehensive AIDS outpatient clinic at the Medical Center of Delaware, now Christiana Care.

A few years later, Jim was instrumental in establishing Christiana Care’s HIV Wellness Clinic in Georgetown, a cooperative venture with Christiana Care and Division of Public Health. We can also thank Jim and Ivo for their involvement in the formation of CAMP Rehoboth.

Ivo and Jim also had a hand in organizing the first AIDS Gala held at the Grand Opera House, a “Die In” in Rodney Square, and the first AIDS Walk fundraiser A Walk for Life.

And now, more than thirty years later, on Saturday, September 24, 2016, the thirtieth annual AIDS Walk Delaware will be held at Grove Park in Rehoboth and at Riverfront Wilmington. Registration begins at 9 a.m. and the step off is at 10 a.m. In as much as the AIDS Walk is a fundraiser, it is also a walk for awareness, and a show of unity by our community. A community of support that Ivo and Jim helped build.

You can make a contribution, sponsor a walker, or sign up to walk yourself at the AIDS Walk Delaware website, aidswalkdelaware.org, or you can register by phone at 302-652-6776. Tell them Jim and Ivo sent you.