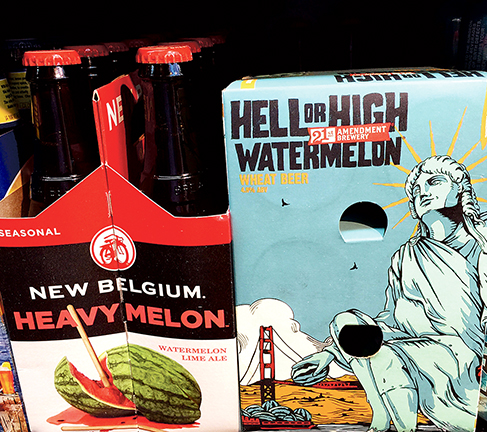 Everywhere I look this summer it’s been craft beer this and craft beer that. Every magazine seems to be running stories this month about the perfect summer beer. Donald Trump says America is under attack from Muslims, Mexicans, and newspaper reporters. I say we’re under attack from nerdy white guys in hip eyewear and beards that are trying to tempt us into drinking blueberry-flavored beer.

I suppose you can tell from this opening salvo that I’m not a huge fan of craft beer brewed with ingredients like coffee, coriander, and pineapple. Seriously? Next we’ll have beer that tastes like cookie dough ice cream. Don’t laugh; its coming, a collaboration between Ben & Jerry’s and a brewery called New Amsterdam. Delaware’s iconic craft brewery Dogfish Head features a beer called Choc Lobster made with—you guessed it—chocolate and lobster. And don’t get me started on hops, a common weed, which imparts the bitter taste that so many craft beer “hopheads” crave.

Craft beer now represents about 12% of the beer industry and is valued at $21 billion. Yep, the industry is hopping and tastes they are a changing.

Clearly, my palate must not be very hip because I like cheap beer, especially in the summer. The kind where terms like “finish” and “color” would never cross your mind, beer that doesn’t require you to study the label to know what you’re drinking.

I’m of the generation weaned on beer brewed in exotic outposts like Milwaukee and St. Louis and purchased in magical places with names like Duck’s and Jug’s Pack and Sack on the outskirts of town where they turned a blind eye to underage teenage drinking and driving.

In college, I discovered keg beer and live bands like Doug Clark and the Hot Nuts and Johnny Sportcoat and the Casuals. Wish I could remember how many plastic cups of keg beer it took to conjure the confidence to go mantle diving at fraternity parties. I do, however, recall my greatest moment of law school. Yep, it was beer related. Me and a couple of fellow 1Ls—that’s what they called first year law students—won the beer chugging contest at the official University of Georgia welcome party. It was the first time a group of 1Ls won it and it set the stage for my entire legal education.

My relationship with cheap beer is both long and strong.

That’s not to say I’ve haven’t strayed. There was a brief affair with a stout Irishman, a three-way with a couple of Belgians, and a quickie down in Dixie. Every now and then I’ll pick up a local beer or maybe something south of the border. But for the most part, I’ve ignored the craft beer revolution.

Then one sultry summer evening recently a watermelon-flavored beer caught my eye. “Heavy Melon” it was labeled, wantonly displayed beside the Sugar Baby watermelons in my local Whole Foods Market. My mouth began watering—pun intended—and I had to have that beer. I picked up a four-pack. Then I noticed a stack of beer that was called “Hell or High Watermelon.” Summer in a can, it claimed, so I grabbed a six-pack of that one too.

The first thing I noticed about the Hell or High Watermelon was its strangely off-putting yellow color. This was a light wheat beer with a lot of effervescence and just a hint of watermelon. It wasn’t bad, but it certainly didn’t measure up to its billing. The Heavy Melon was more orange in color. It was a heavier beer and the watermelon taste was a bit heavy handed. A couple of knowledgeable beer reviewers liken the taste to Jolly Rancher watermelon candy and I can concur.

This experience should have been enough to deter me, but for some reason I was compelled to pursue more of these summer craft beers. I tricked next with a grapefruit seasonal session IPA called “The Hook” brewed by Starr Hill Brewery outside of Charlottesville, Virginia. I had no idea what I expected to find with this one. God? The secret of life? I didn’t even know what a session IPA was. What I discovered was a rather bitter beer with a touch of grapefruit. Ehh…

I turned to Dogfish Head, the darling of Delaware beer. Certainly these guys could turn out a beer fit for a summer fling. I first tried Fertina Peche because I like peaches and because of Delaware’s history. You know Delaware was once known as the peach state until disease wiped out the industry. This beer is marketed as a neo-Berliner weisse. Huh? That’s code for a particular type of tart wheat beer that the Germans soften with fruit. Dogfish use of peach wasn’t bad. It’s an acquired taste that’s for sure. But perhaps I was onto something?

I subsequently picked up a six-pack of SeaQuench Ale, a new Dogfish release for the summer. It sounded like the perfect beer for the beach with flavorings of lime peel, black limes, and sea salt. I filled my cooler. It was the most disappointing of all the summer craft beers I’d been carrying on with. One sip and I was contracting my lower facial and jaw muscles. This action pulled down my upper facial muscles, which resulted in squinting while my jaw muscles pulled up the neck and shoulder muscles. I felt as if I were having a seizure. It was that sour.

Luckily I had the good sense to slip a couple of Budweisers into the cooler. They were cold and refreshing and I immediately relaxed, away from the pressure wrought upon me by all this craft beer nonsense. And that, my friends, is the essence of a true summer beer.