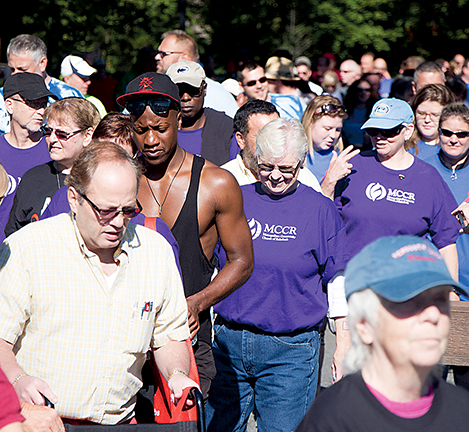 30 Years of Walking to Raise Awareness about AIDS

Where were you thirty years ago? It would have been 1986 or 1987, right in the middle of the “Decade of Excess.” It was a time of extremes, to be sure. The top two shows on television were The Cosby Show and Roseanne, each show redefining what a loving family on television could look like. On the radio, the Bangles were encouraging everyone to “Walk like an Egyptian,” while Whitney Houston was pleading, “I Want to Dance with Somebody Who Loves Me.” Fashions ran the gamut from big shoulder pads to jelly shoes, acid-washed jeans to parachute pants. And don’t forget your fingerless gloves!

Thirty years ago also marks the first time that an AIDS Walk was held in Delaware. Yes, this year’s Walks, being held on Saturday, September 24, mark the 30th anniversary of this important AIDS fundraiser! For most of the first two decades, the AIDS Walk was held in the Wilmington area. Rodney Square in downtown Wilmington was the site of those early Walks, and as the Walk grew, it moved to Rockford Park, and, most recently, the Wilmington Riverfront. Twelve years ago, the effort expanded downstate, with AIDS Walks being held in Dover and in Georgetown. Since 2009, AIDS Walk Delaware has located its downstate walk at Grove Park by the circle as you come in to downtown Rehoboth Beach.

AIDS Walk Delaware is a collaborative fundraiser for HIV prevention and treatment services, organized each year by AIDS Delaware and the Delaware HIV Consortium. John Gardner of AIDS Delaware remembers where he was thirty years ago…and why he is where he is today. “I was working as an auditor at DuPont Corporate, having recently left a position at J.P. Morgan Bank,” says John. While at DuPont, he joined the Board of Directors at AIDS Delaware, and in January 2012 became its Executive Director. “AIDS Walks are not a thing of the past. There still is a need to raise awareness about AIDS, and there still is a need to raise money.” John is particularly excited about the t-shirt that will be given away to Walkers who raise at least $30. Each shirt has half of an AIDS Awareness ribbon on it. To complete the ribbon, you have to stand next to someone else. “It’s a good symbol of what we need to do to make a difference. We have to come together!”

Thirty years ago, Consortium Executive Director Peter Houle was already working on AIDS Walks. That year he was working in Chicago; other years found him helping with AIDS Walks in New York and Phoenix, before coming to Delaware in November 2003. “Those early Walks were grass root events,” explains Peter. “People were passionate about the cause. Over the years, complacency set in. We have to overcome that! People are still getting infected. We have come a long way, but we still have a way to go.”

This year the AIDS Walk in Rehoboth Beach is being coordinated by Joshua Sheets, a case manager on staff with the Delaware HIV Consortium. It’s impossible for Josh to say where he was thirty years ago…because he wasn’t born yet! As a twenty-something, Josh is working hard to bring new energy and new faces to this year’s Walk. “I want to encourage people to reach out to their family and friends, and to invite them to participate in this year’s Walk. We need everyone’s help!”

AIDS Walk Delaware is an important way to raise community awareness and needed funding at the same time. All money raised through the Walk stays in Delaware to fund HIV prevention and treatment services in communities throughout the state. This year’s Walk will be held on Saturday, September 24, with check-in starting at 9 a.m. and the step-off at 10 a.m. In northern Delaware, the Walk is being held at the Wilmington Riverfront; Rehoboth’s Walk begins and ends at Grove Park. At the beach, the 5-kilometer walk takes about 45 minutes to complete, and the route includes part of the Boardwalk. For many walkers, the emotional highpoint of the walk is the opportunity to remember loved ones who have lived with HIV disease. Walkers place red carnations, supplied by Windsor’s Flowers on Coastal Highway, in front of a metal sculpture of an AIDS Awareness Ribbon. The sculpture was created by Rehoboth Beach artist Ward Ellinger.

For more information about this year’s Delaware AIDS Walk or to register as a walker, visit aidswalkdelaware.org. You may also register the day of the walk at 9 a.m on Saturday, September 24 at Grove Park in Rehoboth Beach, or Dravo Plaza at Riverfront in Wilmington. Gather your friends and family and come join us for the 2016 AIDS Walk.