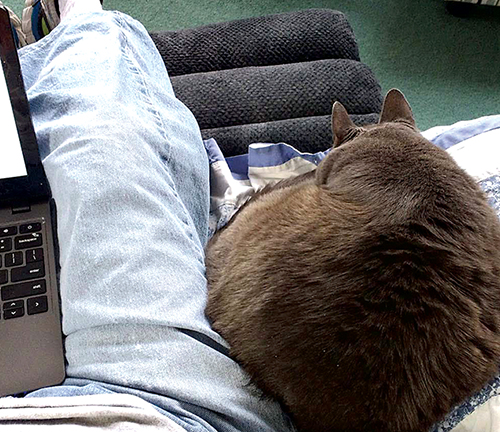 Game of Throne is what my sweetheart calls the nightly battle between our cat and me over Big Blue.

Bolo is our gray, fourteen year old, lesbian-required cat. Sadly, we’re down to just one kitty and no dogs. We can’t add either to our household because Bolo has diabetes. Her symptoms are triggered by, among other factors, stress. An addition to the family could kill her.

The Throne is Big Blue, a recliner we bought for my rotator cuff surgery. In recovery, it’s too painful to lie flat and I only had use of one arm for two months, so we needed a power recliner. I added the stipulation that it fit both Bolo and me.

Once my shoulder healed enough, I was able to return to my sweetheart’s side and the cat, a heavy sleeper and loud snorer, to her place on us, between us, or as a lump on our feet.

When my sweetheart first mentioned Game of Thrones, I thought she was talking about the current presidential race. Neither of us follow the HBO series. Without that frame of reference, it made sense to me that she would be talking about Clinton vs. Trump, a nightmare that should not be happening. No one in the U.S. has ever worked harder to prepare for the presidency than Hillary Clinton. Never mind what a complete (insert bad word here) Trump is, Clinton has been in government for so long, the (new bad word) opposition uses her suitability against her.
I pictured he-who-would-be-king attempting to de-throne she-who-qualifies-for-coronation.

There was our blonde equivalent of Kim Jong Un in all his immaturity, surrounded by the likes of supporters Chris Christie, Rudy Giuliani, Mike Tyson and Sarah Palin, headed for the throne as if entitled. And there was Secretary Clinton, followed by a train of millions of women—suffragist foremothers to expectant little girls to underemployed lesbians—carefully navigating the broken glass of a ceiling never before penetrated.

That this should be a contest at all is beyond my comprehension. People say they don’t trust Clinton. And they trust Trump? People believe the muck that’s flung at Clinton. And they don’t see that their god of business is covered in slime? People say they want the country run like a business? Well, finally, after decades of big business corrupting our government, capitalism may trump democracy.

To call a powerful woman names and to otherwise disparage her—come on, America, we’re better than this old-fashioned misogyny.
Oh, America, where has your soul gone? It used to be said that our streets were lined with gold. Now they are, but not the narrow streets filled with people of color and immigrants, not the dirt roads into rural poverty, not the intersections crowded with protesters, not the crosswalks which the old and/or disabled enter with trepidation as drivers speed through, oblivious.

Hillary Clinton has always shown that she cared for all Americans. From her first universal healthcare attempt to advocating for women employees on Wall Street, she has proven her bonafides, while her challenger has left service workers in the dust, business people unpaid for their labor, and financial failures of colossal size.

But that wasn’t what my sweetheart meant at all. Not the Game, not politics, but our delight in Bolo and Big Blue.

It doesn’t take much to make this marriage gay. We laugh when Bolo’s all snuggled in beside me and I dare to absent myself for some necessity or other. Say, heating up my green tea, refilling my sweetheart’s Diet Coke, giving Bolo her insulin shot, or, goddess forbid, visiting the restroom. When I carefully lower the footrest, our little one glares at me sidelong, perturbed, and moves not a squinch to let me up.

I wriggle out slowly, slowly, making myself as small as humanly possible to avoid further disturbing Her Highness. As soon as my back is turned, my sweetheart tells me with a laugh, Bolo takes over the entire built-for-two seat to soak up whatever warmth I’ve left. We live with an energy-efficient cat.

On my return, the true tussle begins. Logically, I should be able to retake my fraction of the Throne. As any cat person knows, cat bodies are subject to thermal expansion. The body heat I leave causes Bolo’s furry fourteen pound self to gain mass and spill from her original boundaries. There is probably a mathematical formula for this.

In a gentle voice, I suggest that Bolo make room for me. My sweetheart laughs more as this method is guaranteed to fail.

I begin slowly, slowly, to sit, while extending my hand and arm to reverse the kitty’s diffusion. Again I get the annoyed glare, her eyes mere slits. I wriggle all the way onto Big Blue, petting the kitty, scritching her favorite spots. Finally, I raise the footrest.

This is not nearly as hard as walking the tightrope of public opinion in sexist America. Or as dangerous as being point woman in the gender war.

Miffed, Bolo gets up and, to underscore her disgust, licks her fur where I’ve touched it. With deliberate dignity, Bolo daintily steps over me and leaves to flaunt her magnificent silver grayness on my sweetheart’s couch.

I have, to my bitter disappointment, won our Game of Throne. I beg Bolo to return, I offer kibble, I debase myself by crawling after her. To no avail. I know how President Obama must feel facing our obstructive congress. I know the stakes are high for gays in this election.

I re-reheat my tea, re-return to the Throne, try to remember what I was working on, focus, and—Bolo’s back, demanding to be petted in apology. By the time she finishes rearranging herself I remember what I was doing: sending a donation to Hillary Clinton, the next president of the United States of America.