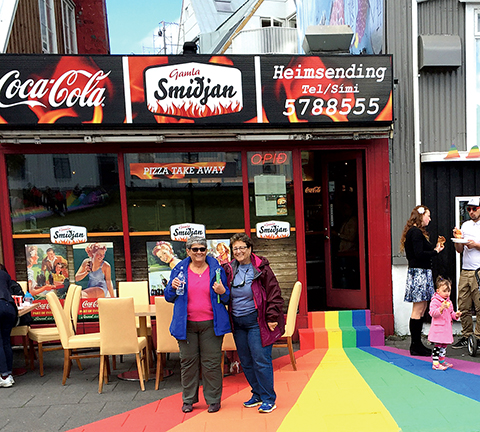 Oh, I Am So Glad to Be Home In Rehoboth Beach!

We recently spent ten days on a wild adventure in an RV, driving (well, for me, passengering) around Iceland’s Ring Road, circumnavigating the entire country.

And when I say adventure, I mean it. The Ring Road is mostly well-paved, but there are absolutely no shoulders—one false move and it’s down a cliff into a fjord. Very occasionally there are small guardrails that couldn’t contain a rolling trash can. Which, now that I think of it, was often the condition of our very tiny, hilariously cramped vehicle.

Oh, and you had to be on the lookout for free range sheep strolling the highway (“Sheep in the road!”) and the frequent one-lane bridges where suddenly you are playing a game of Icelandic chicken. It’s a good thing my wife is a great driver— especially since we got an RV with a standard transmission. She was behind the wheel for the whole trip because first, who would trust me on those roads and second, I never learned to shift for myself. Bada bing.

There’s far too much to share in one column, but I loved the steaming “hot pots” from the geothermal springs below the moonscape terrain, the touristy Blue Lagoon, the friendly people, and marvelous fish and lamb dinners. The ubiquitous waterfalls, lagoons full of blue icebergs, black beaches, whales and puffins took our breath away. Much of the country looks like the film set for Matt Damon on Mars. There are no trees except ones people plant on farms and in cities. We were cold and wet while everyone in Rehoboth was boiling and schvitzing. By week’s end, we were mildewing.

And don’t tell my wife, but I think my camping days are over. Every time I got in or out of the vehicle I sprained myself. The bed was like sleeping on an ironing board, and the bathroom was so small (How small was it?) you had to step out to change your mind. Bada bing.

But if I can share just one trip highlight it would be our arrival in the capital city of Reykjavik on, of all things, Pride Weekend. And holy Donna Summer do they do it right!

Every single store, hotel, and restaurant flew rainbow flags, had rainbow decorated windows, or had painted (painted!) storefronts and sidewalks the full spectrum. Hundreds of lamp post banners celebrated Pride, which had already been going on for days with shows, dances, movies, and more.

Then came the parade. Iceland has less than 350,000 people, but at least 75,000 people stood waiting along the route—locals, people from around the country, and lots of international visitors. It was a human rainbow—gay, straight, many, many families with kids, people of all ages, ethnicities, and style. Youngsters wore rainbow face paint, rainbow clothing, and even some of the public sculptures were festooned with rainbow clothing or leis, which somebody had purchased by the thousands. Volunteer parade organizers were visible but not plentiful and there was no police presence as none was needed.

It was reassuring that the parade kicked-off with Iceland’s version of Dykes on Bikes, an honor guard of local officials, backed up by a group from the American Embassy. Then came floats with disco dancing drag queens, gay bar staffs, commercial entities like banks and restaurants, and on and on, all to the sound tracks of “I Will Survive” and “Dancing Queen.”

Afterward, we left the Rainbow Gayla and shows to the youngsters and held out in a nearby pub. Everybody partied with pride and an infectious air of unity.

So grand, in fact, that I challenge the City of Rehoboth Beach, in concert with CAMP, to put an event like this together. The CAMP Rehoboth Block Party is coming up October 16. We can start there, having the whole town show up, commissioners and the mayor included, coming together in unity and pride.

Then, come next June, maybe we can have a Rehoboth Pride Parade with every store, restaurant, and hotel window decorated, rainbow banners along the avenue, and a unity in celebration like nothing we have ever seen. Maybe we can make it happen.