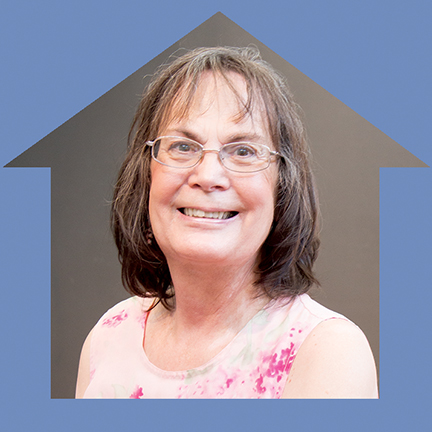 Loree Arnold lives in Rehoboth Beach with her kitten named Frédèric. She loves to read, especially fiction, and history. She listens to classical and jazz music on her stereo, is a big fan of Downton Abbey, and various mysteries such as Poirot, Pie in the Sky (an unknown gem, according to Loree), and lately, some Hallmark Mystery Channel shows. Loree’s passion is being an artist, she paints oil colors. She says, “I don’t see how something I love can be either hobby or work.”

Loree grew up on Long Island, and moved to Pennsylvania in 1962. She attended St. John’s College in Annapolis, Maryland, graduating in 1968. After graduation, she moved back to Pennsylvania, working at various retail positions. In the early ‘80s, Loree was a frequent visitor to Rehoboth. These visits made her miss Long Island, and she longed to be near the beach again. So, in 1982, Loree made the decision to live near the beach, and moved to Rehoboth.

My first volunteer opportunities were in 1997. I helped with various mailings (the mailings were much smaller than they are now). I also helped with stuffing the bags for the Sundance Hosts.

What’s your best memory of volunteering at CAMP Rehoboth?

I have a few. But, I will just mention two. The first would be the people from all over returning each year to work with the “glue crew” for Sundance. We just yak away like we never paused, while we prepare the item boards for the Sundance Silent Auction; and, of course, shooting the classical breeze with my Opera Buddy, Sal. The second would be when I was volunteering at the CAMP Follies, watching Steve Elkins—in his boots—singing the Nancy Sinatra hit “These Boots Are Made For Walkin’.”

The Sundance Auction; especially right before the crowds and volunteers come. It’s like a rainbow, magically lit and full of flowers. The space always looks fabulous and the variety of talented artists always takes my breath away.

My favorite season is fall for the gentle fun. However, I love painting on summer mornings at the boardwalk, especially with the curious kibitzers. I once even had a young seagull that appeared to compare my canvases to the ocean.

I would relax alfresco with some friends after I have finished a plein air canvas. I would share the process, and gather their impressions.

My best year would be 2005. That is when I finished my gender restoration. I did this with the help and good wishes of my friends from CAMP Rehoboth.

I am an early riser. Funny though, I was a night owl until my transition gave me the proper hormones and my body and spirit began to float along in harmony with life.

Scottsdale, Arizona is at the top of my list. My medical support team is there. Also, I just love to paint the desert. However, it’s a two edged sword. When I am in the desert I miss the ocean, and when I am home by the ocean, I miss the desert.

Thinking back, I would say no, I did not. For the greater part of my life people did not even know how to talk about LGBT out loud. But, I have come to realize that my transgender life, and that of others, is really a mystery for everyone, and not a secret kept by a few, so curiosity is on our side.

I have been coming to Rehoboth since 1980. I was dating someone whose relatives owned a beach house. I missed the beaches on Long Island and coming here helped. Before I decided to move here, I was torn between moving to the beach or to the mountains. Then, I met a waiter in Vermont. He suggested that I try a winter in Vermont before moving to the mountains. Obviously, I chose the beach.

The biggest change would be all of the progress. I remember in the early ‘80s everything except the Robin Hood Restaurant closed after Labor Day. Now we have stores, restaurants, and who could forget about the outlets, that are open year round.

First, seeing my paintings in the silent auction receive bids. It was an unbelievable feeling. Second, the first time I walked onto the silent auction floor before the doors opened. It was a magical fairyland of fabric, flowers, displays, rainbow light effects, and music, conjured in just a few days. It felt as though the convention center had grown a soul. Third, the street and courtyard windows of the “old” CAMP; it was better than a Macy’s Christmas window since one could jump in to the folding and mailing festivities and be part of the display.

My ideal date would be an afternoon at MOMA, a light dinner (chicken soba noodle salad across the street), then up the street for Benjamin Britten’s A Midsummer Night’s Dream at the Metropolitan Opera. Or, even better, a Rehoboth Beach Boardwalk stroll working up an appetite for dinner anywhere in town (so many fun spots), followed by a Christopher Peterson performance.

I am most thankful for the CAMP volunteer openness, Murray and Steve, and the gang. They didn’t have all the answers, but they gave me a place to search for them.

Loree, we are so thankful to you for your many years of volunteer service for the various CAMP Rehoboth events; especially for all of the years as part of the Silent Auction Team, or as you put it, “the glue crew.” We look forward to having you volunteer for Sundance again this year, and many more years to come. We hope you will also continue to volunteer for other CAMP Rehoboth events as well. We are blessed to have volunteers like you.