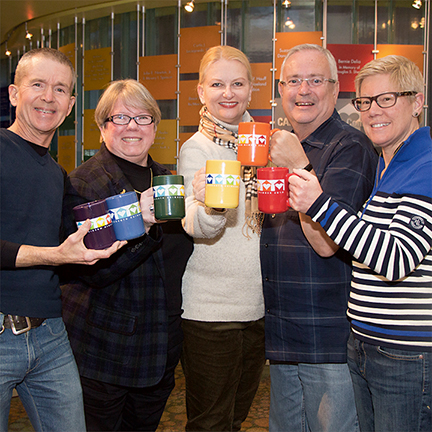 The CAMP Membership Committee gathered to kickoff the 2016 CAMP Rehoboth Membership Campaign and show off the last mug in the collectible rainbow series of mugs, started in 2009. Join now to receive a mug before this series is retired. Go to camprehoboth.com or call 302-227-5620. Photo: Murray Archibald, Kathy Davison, Sandra Skidmore, Steve Elkins, and Debbie Woods. (Not shown,  Jane Blue and Don Crowl.) Tahiti Trip from Olivia to be Raffled

Women’s FEST Presenting Sponsor and longtime CAMP Rehoboth supporter Olivia Travel has donated a South Pacific Cruise to Tahiti, sailing August 20-27, 2016. This “once in a lifetime,” all-inclusive, six-star luxury vacation package will be raffled as a part of Women’s FEST 2016. But don’t wait! Only 600 raffle tickets will be sold: $20 each or six tickets for $100. Purchase at CAMP Rehoboth or online at camprehoboth.com. Tickets for the popular Indigo Girl Emily Saliers concert, as well as Women’s FEST Passes, and tickets to all events have been on sale to CAMP Rehoboth members since February 1. Beginning February 15 all tickets are available to the public. The FEST Pass is the best way to enjoy the concerts, comedy, workshops, dances, sporting activities, and special events of Women’s FEST 2016. Tickets and info: camprehoboth.com. In the days leading up to the opening of the CAMP Rehoboth Chorus concert Sassy, Brassy, and Classy, the Chorus did some last minute rehearsing at Epworth. At publication time, the Epworth concert was almost sold out. Tickets sales for the March 20 show begin on Feb. 15. A towering red ribbon was part of the recent Christmas Parade in Rehoboth Beach, falling as it did, on World AIDS Day. Photo: Eric Engelhart, Keith Hopkins, Sharyn Warwick and Chris Beagle. The Gay Men’s Chorus at CAMP

Members of the cast of the Gay Men’s Chorus of Washington DC’s cabaret act The S* Show, gathered after their three January performances to celebrate their sold-out run at the CAMP Rehoboth Community Center. With the year-long closing of the Rehoboth Convention Center, plans are being developed to make use of the Community Center for a variety of concerts and events suitable for the more intimate space. Watch for details. Letters from CAMP Rehoboth loves a winter getaway! Michael Warns and Rick Freda took it on their Las Vegas vacation (though what happened to it in Vegas stayed in Vegas!). Jim Williams, Jim Mease, and Phil Vehslage shared the sights of Spain with it. Tara and Em Sheldon even took it for a swim on their trip to Costa Rica. Kris and Nan Martino, and Linda Kemp (center), cruised with it aboard Olivia’s Mexican River Cruise.