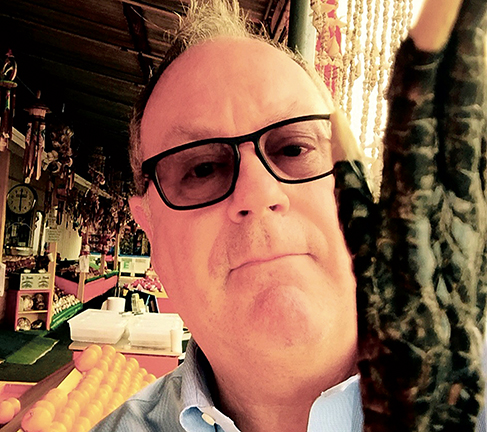 I wasn’t sure what to expect the morning I climbed into the passenger’s seat of my father’s big silver Cadillac for the start of our road trip from Charlotte, North Carolina, to Key West, Florida. Three days. One thousand miles. It had been awhile since we’d experienced so much uninterrupted togetherness.

My father and I had been talking awhile about taking this trip. Not as a bucket list kind of trip and most certainly not one of those father/son bonding trips—at ages 77 and 55 respectively that seems sappy. As a fourth generation Floridian and a bit of an amateur Floridologist, I wanted to reconnect with old Florida. My father knows old Florida—heck, he is old Florida—and he likes to drive.

Here are a dozen things I learned on our trip together.

1. The rows and rows of orange groves one used to see on the Sunshine State Turnpike in central Florida have now been replaced by rows and rows of orange stucco tract houses as far as the eye can see. Moreover, the Sunshine State Parkway itself was designated as the Ronald Reagan Parkway in 1998, in part I suppose because Reagan ended the Cold War and saved the lives of all the old people.

2. There are still a few places where you can stop and buy an alligator foot backscratcher, some painted coconuts, and get a free taste of fresh Florida orange juice.

3. Spanish moss isn’t a moss at all. It’s a plant belonging to the bromeliad family.

4. If it weren’t for the Cold War, I probably would have grown up saying “youse” instead of “y’all” and jonesing for brisket rather than barbeque. My father was supposed to take a job in Manhattan after leaving military service. President Kennedy, however, suspended all military discharges while the Cuban Missile Crisis played out. By the time he finally got out of the Army, the job was gone. He ended up instead in North Carolina.

6. Following WWII, my great grandfather purchased a little beachfront lot on Alligator Point on the Gulf of Mexico just southwest of Tallahassee, Florida. There on weekends, he built by hand a small cinderblock and timber cottage. Seventy years and several hurricanes later the simple little house is still standing. I can’t believe we found it.

8. I saw more rebel flags in north Florida than in Georgia.

9. My father has great hair and he knows it.

10. The American pencil industry began in New England but it migrated south to follow the cedar wood. Cedar Key, Florida, at one time boasted two pencil manufacturing plants. Noted naturalist writer John Muir visited Cedar Key on his thousand mile walk from Indiana to the Gulf of Mexico in 1867.

11. Floridians are obsessed with alligators. Did you hear the news story about the guy who tossed a baby gator into a fast food drive through window? He’s been charged with assault with a deadly weapon.

12. My father still drives fast and he never wants to stop. I like to pause and look along the way. He listens to the news when he drives. I opt for music. He likes his GPS navigation whereas I prefer a paper map. He sets a schedule and does his darndest to stick to it. I find every excuse to derail things. Some things never change.