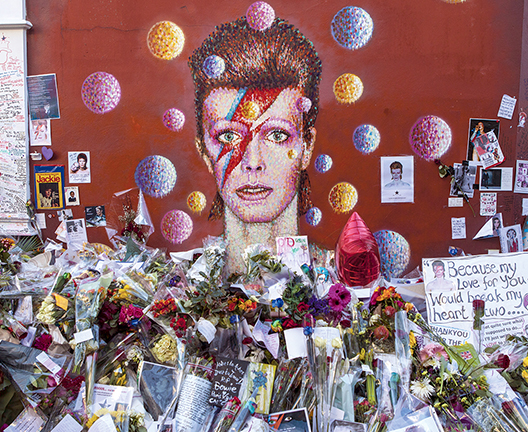 Turn and Face the Strange

On January 10, David Bowie, the multi-talented musician, songwriter, singer, actor, and innovative artist, died of liver cancer. Space Oddity, Hunky Dory, Ziggy Stardust, Aladdin Sane—Bowie’s personas and his music influenced our lives for five decades. I can’t imagine the 70s without his glam rock. On the day he died, I listened to his music for hours.

In the days since, Bowie’s music has continued to resonate with me—especially his song “Changes,” which I can’t seem to get out of my mind. “Changes was released in late 1971 on the Hunky Dory album and as a single in January 1972. Though it didn’t crack the Billboard top 40 at the time, in later years it become one of Bowie’s most famous songs, and in our continually changing world, it still holds up as a perfect anthem for 2016.

“Ch-ch-ch-ch-changes” is one of those memorable musical phrases that we all know, but the line that comes after it is even more challenging: “turn and face the strange.”

“Facing the strange” is not an easy thing to do, and perhaps one of the reasons we all tend to find change so frightening.
As the new year begins to take shape, several strange and seemingly unrelated incidents (including David Bowie’s death) keep rattling around in my brain.

For one thing, on New Year’s Eve the year started off with those unsettling images from Dubai of the luxury hotel, The Address Downtown, in flames as a massive fireworks celebration exploded merrily around it. I’m not a superstitious person normally, but the thought did occur to me that this bizarre juxtaposition of horror and celebration, while oddly fitting for the times in which we live, is not a particularly good omen for the new year.

Even stranger is the language being used by some of the Republican candidates running for President—language that plays on fear and bigotry, and seeks to divide instead of unite our nation. Using homophobic, racist, anti-immigrant, and anti-Muslim language, the candidates are deliberately creating an atmosphere of hate to further their own political success.

Maybe it’s only me, but the ugly words of the 2016 campaign have been dragging my spirits down in this new year, and I’ve promised myself I will not spend more time watching this political sideshow than it takes to glean all I need to know about what’s happening in the news.

Here at CAMP Rehoboth, we are starting our 26th season, and I know that as the leaders of the organization focus on the future, we will have to turn and face a number of strange issues—not the least of which is the closing of the Rehoboth Beach Convention Center (the location of many of our events) for a year. In the big picture of CAMP Rehoboth, that is not a big deal by itself, but it does force us to work outside of our accustomed routine. Probably not a bad idea at all!

Actually, I don’t believe change is possible without first shaking ourselves out of the groove that makes life easy—which is why “turn and face the strange” should be the first step for anyone or any organization seeking to make changes.

In order for us to make changes in our lives, we first have to accept the idea that change is necessary—and that, my friends, is not always an easy thing to do. We hate change, even as we complain about being stuck in a rut.

In recent years, the CAMP Rehoboth Board of Directors created a succession plan. As a part of that plan, once Steve and I (as founders of the organization) decide to retire (officially Steve as Executive Director, but in reality, both of us) a series of year-long actions will kick into place. The hard part for me has been getting to the point where I would even look in the direction of retirement. I won’t say I’m completely there yet, but this winter, something has changed, and I am beginning to accept the fact that we will at some point in the future make the decision to retire. That may not sound like a big change in attitude, but it is a big step for me—and the first step in turning to face the “strange” idea of retirement.

Our CAMP Rehoboth Succession Plan also includes a section on dealing with emergencies or the unexpected loss of a key person in the organization. This plan was a tremendous help when long-time CAMP volunteer staff member Charlie Lee passed away almost a year ago. The detailed report of Charlie’s duties contained in the Succession Plan made it possible for us to continue the vital work he did for the organization.

Like our Succession Plan, turning to “face the strange” forces us to face what change might look like, and it also allows us the ability to create the pace and the nature of change in our lives. Sometimes we don’t have the luxury of preparation, and change comes, abruptly, without warning. When we take time to create a vision for the future, we at least do all that we can do to prepare for such unexpected events.

In my years as President of the Board of Directors of CAMP Rehoboth I have been privileged to work with many talented Board members, and I’m always grateful for the deep commitment to CAMP Rehoboth that each one brings to their time of service to our organization. As we move forward as an organization, our Board must continue to be clear about our mission and goals—and we must have a strong vision for the future. In order for us to continue to be a successful organization, we must not be afraid to “turn and face the strange” and challenging world around us. We must be open to new ideas and to the input from a younger generation—even as we welcome the wisdom and talent of our aging population.

Change can be difficult, yes, but only if we allow ourselves to feel threatened by it.

As we begin the second quarter century of CAMP Rehoboth, I’m confident that our leaders and volunteers are up to the journey, and that we will have the courage to face whatever “strange new world” the future may bring.

Oh yeah, and one last farewell to Mr. Bowie,

Murray Archibald, CAMP Co-founder and President of the Board of Directors of CAMP Rehoboth, is an artist in Rehoboth Beach. Email Murray. Photo: David Bowie graffiti memorial.