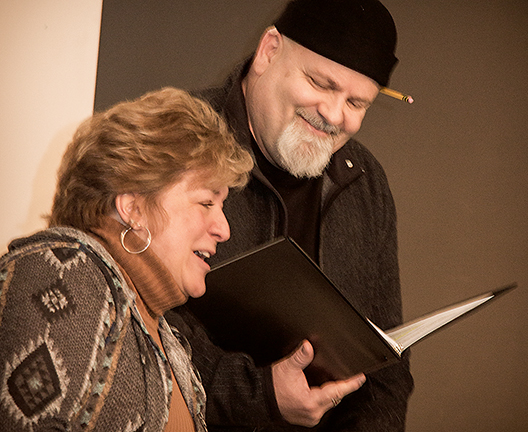 Rehoboth’s Clear Space Theatre Company and CAMP Rehoboth are collaborating to present a reader’s theatre production of The Laramie Project as a fundraiser for both organizations.

The Laramie Project tells the heartbreaking, but true story of Matthew Shepard, a 21-year-old gay college student who became the fatal victim of a heinous hate crime in Laramie, Wyoming in 1998. After being kidnapped and severely beaten, Shepard was tied to a fence in the middle of a prairie and left for dead. Not discovered until the next day, he died several days later as a result of his injuries.

The Laramie Project shares Shepard’s painful story through a series of monologues that recount the thoughts and feelings of those who directly and indirectly experienced Shepard’s murder.

In an effort to chronicle the life of Shepard, as well as the town of Laramie in the year following the murder, members of the Tectonic Theater Company interviewed members of the community, friends of Matthew, and pored through newspaper articles and court transcripts to write The Laramie Project. A compilation of the real stories, memories and events, the play includes the words of 83 members of the community of Laramie. The show is performed in three acts and is written as a series of “moments” in Laramie.

As a work that brings awareness to the price of discrimination, the piece perfectly complements the heart of the CAMP Rehoboth philosophy: to celebrate diversity, build a strong sense of community, and create a more positive environment for all people—gay and straight alike.

The piece also offers Clear Space an opportunity to offer a different type of theatre experience—specifically that of reader’s theatre, in which actors will have scripts in hand. In this production, however, due to the intimate nature of the material, they will not be seated as is traditional in a reader’s format.

Directing the show is Becky Craft, a local actor who has directed The Laramie Project before. For this project, she has accrued a total of 18 local and professional actors, including Equity actors Elaine Faye and Jack Herholdt who are able to join the cast thanks to the Actor’s Fund. Each actor will perform a multitude of roles throughout the production.

“The fact that this show is true, and shows the foibles and fancies of an entire community is intriguing to me,” shared director Becky Craft. “I have always been passionate about this story, especially after having met Mr. and Mrs. Shepard. It is amazing to me to watch the actors take on the lives of so many individuals and to switch from one person to another, one moment to another. This cast is amazing and they are treating their roles with respect and restraint.”

This production will actually be Clear Space’s second collaboration of its kind. Last year, Clear Space co-produced a reader’s theatre rendition of Love, Loss, and What I Wore with the Beebe Medical Foundation in order to celebrate Women’s History Month and support the Beebe Healthcare 3D Mammography Program and the Clear Space Theatre Arts Institute Scholarship Fund.

“After last year’s success collaborating with the Beebe Healthcare Foundation, I decided that Clear Space would make a staged reading a permanent part of each season,” offered Clear Space Artistic Director David Button. “These projects are important for Clear Space and the community because they not only offer a look at another type of theatre, but they also allow two nonprofit organizations to work together toward a mutual goal that supports both our missions.”

As it is a special event, The Laramie Project will only play for two performances on Saturday, March 5 at 6 p.m. and Sunday, March 6 at 2 p.m.
At the start of the event, attendees will enjoy an hour-long reception with hors d’oeuvres, as well as beer and wine.