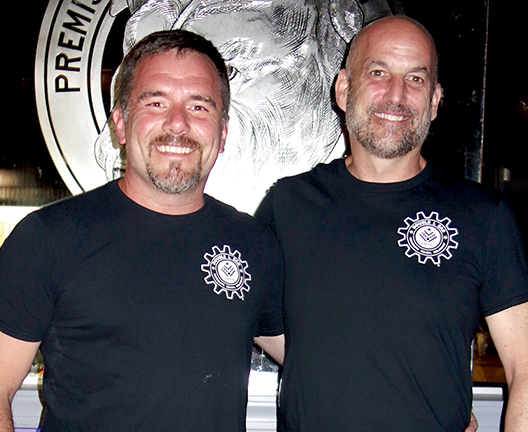 The gay community loves entertainers who reinvent themselves. Consider Cher’s many costume changes over the years. How about the musical evolution of Madonna? And now we can add to the list, the Double L Bar (37298 Rehoboth Avenue).

A fixture of Rehoboth nightlife for nearly two decades, the Double L is under new ownership. Tim Drabic and Terry Snoddy became the official owners of the bar on May 20, and already they have been making the place their own. The exterior is freshly painted gray and black, with pops of color from the flowering plants in the well-manicured beds surrounding the building. The interior features a main bar with a greatly-expanded variety of liquors and draft beers and much needed air conditioning has been installed. However, the back patio, one of the largest in Rehoboth Beach, has seen the most changes. Additional seating makes the patio a comfortable place to meet friends for drinks and conversation. A newly-planted thirty foot red sunset maple is already providing a little shade, and hibiscus plants and palm trees add a touch of the exotic. Six misting fans are being installed to help cool things down when it gets too hot. Tim and Terry have already achieved their first goal: to make the Double L a more livable, relaxed place to be.

However, the reinvention of the Double L consists of more than a coat of paint and a new tree. It’s a new philosophy, one of community and collaboration. That’s apparent in any conversation with Tim and Terry, who are quick to express appreciation to others. “Our first night open for business was the Friday night of Memorial Day Weekend,” explains Terry. “People turned out, excited that the Double L was back. It was spectacular!” It was also a bit intimidating for the new owners, who were grateful to have some familiar faces around that first weekend.

“We were lucky to have several bar staff return for another season at the L, and they knew how everything functioned behind the bar,” added Tim. The previous owners were always just a phone call away to answer a question or lend a hand, if needed. Business advice and words of encouragement also came from Tim Ragan and Randy Haney (Blue Moon Restaurant), as well as Joe Zuber and Darryl Ciarlante (Dos Locos).
“We cannot do it by ourselves, that’s for sure. It feels like the community wants the bar to be successful, and we certainly want to give back to the community.”

Those are not just hollow words to Tim and Terry. On the Saturday night following the terrorist attack at an Orlando LBGT nightclub, the Double L donated the night’s cover charges to the victims of the attack. “We came up with the idea at the same time as our Friday night DJ Ryan Doubleyou, and it grew from there,” Tim explained. “We took the idea to Stephen Durkin, our Saturday night DJ, who donated his cut from the door. Then we partnered with CAMP Rehoboth and the Rehoboth Beach Bears to make it even more of a community event.” A half dozen members of the RB Bears worked the door, collecting cover charges, giving out bear hugs, and making everyone feel a bit safer. In all, nearly $2,000 was collected that night for Orlando, which included the cover charges as well as additional donations from generous bar customers.

Tim and Terry also believe in consistency. They want the community to know that the Double L will be around for a long time to come, and that there will always be something happening at the L. New this year is “Yappy Hour”, Monday through Friday, 3-7 p.m., on the Patio. “We have a lot of fun,” says bartender Steve Cannon. “It’s a mixed crowd, with both men and women during happy hour. We have great snacks and happy hour pricing on drinks. So stop by and bring your dog with you…or your ugly date…or even someone who simply enjoys wearing a dog collar. This is the Double L, after all!” The Double L has something for everyone in the gay community. Every Saturday there is a Bear Bust from 3-7 p.m., a happy hour dedicated to our bear community. Mandance on Saturday night continues to have a great following. Sunday Tea Dance is an opportunity for everyone from the gay community to come out and dance, while Gear Night on Thursday is more for the leather gear and sports gear crowd. The newest debut is going to be on Monday night July 4th with a Show Tunes Night. “We were also told, but not sure, that you can see Dewey’s fireworks from our courtyard on the 4th of July.

Steve added, “What the owners are really trying to do is bring some of the best events they have experienced, at some of the other great bars across the country, to Rehoboth Beach.”

Every night at the beach is fun, but holiday weekends make for Big Fun. To accommodate the extra revellers in town this Fourth of July Weekend, the Double L is taking it to the streets—or more accurately, the parking lot! “We are basically converting a portion of our parking lot to a Beer Garden outside with food, liquor, and music on Friday, Saturday, and Sunday from 3 p.m. to 2 a.m. (no liquor after 1 a.m., of course),” explains Tim, excitedly. “While we started this permit process early, it was only approved June 24 since we have such wonderful neighbors in the Crystal Diner, who will allow us to use their parking spaces after they close at 3 p.m.” The Double L will be partnering with Dos Locos and some other local gay restaurants to have food at the event.

Upcoming events at the Double L include a leather event and the Mr. Double L Contest, which will be held Columbus Day Week. The Double L Bar is also a sponsor of the Rehoboth Beach Bears Bear Weekend planned for September 15-18. So stop by and see Tim and Terry, and Steve, Chad, Chris, Cody, Brian, Doug, Will, John, and Edwin—all part of the Double L Family. Come enjoy the brand new Double L Bar, same place with some old and new faces!