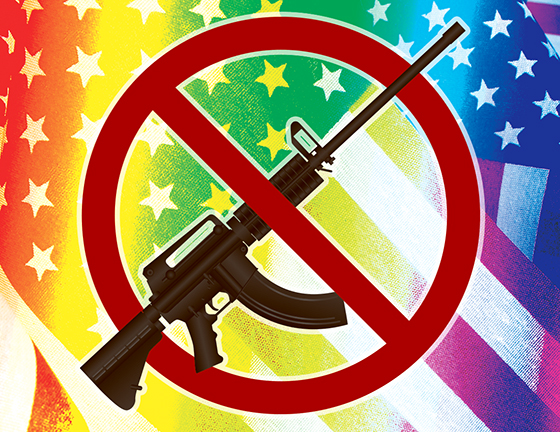 Red, White, and the Blues

Modern life is a constant barrage of both good and bad news. Occasionally, however, an event occurs that so upends our world, it shakes us out of the complacency that keeps us in lockstep with the world around us. The mass shooting in the Pulse Nightclub in Orlando on the morning of June 12, is one of those events—and its repercussions are still rippling through the fabric of life in our country.

After every mass shooting in this country, the national conversation has turned toward gun control, though thus far, talk is all it’s been. This time, I’d like to say that it feels like the tide of public opinion is shifting somewhat, and that finally there will be action to go along with the conversation. So far, and despite Democrats best efforts, that kind of legislation hasn’t passed, but the sight of iconic civil rights activist Rep. John Lewis (D-Ga.), leading House Democrats in a sit-in in the US House of Representatives to protest the lack of action on gun violence—and wearing a rainbow ribbon!—was inspiring.

At first, in the days after the Orlando shooting, the idea that LGBT organizations could unite to work for gun control began to appear on social media as almost a joke. Quickly, however, the realization that our community is not only well organized and politically connected, but experienced in fighting for every right we have, made it seem like a realistic option. Within two days after the shooting, our next LGBT battleground—this time for gun control—was taking shape.

At its June meeting, the CAMP Rehoboth Board of Directors voted unanimously in support of a motion, “to engage in lobbying and educational activities relating to gun control and gun control legislation, subject to the limitations imposed on charitable organizations exempt from income tax under Section 501(c)(3) of the Internal Revenue Code.”

That same day, the Board of Equality Delaware passed a similar motion, and the next day both organizations released a joint press release announcing the decisions. See In Brief in this issue to read that press release.)

CAMP Rehoboth also signed on to a letter from the international Arcus Foundation urging “Congress to make a start towards stronger protections against gun violence nationwide by enacting laws to: 1. Prevent known and suspected terrorists and those convicted of violent hate crimes from legally buying guns. 2. Ensure that criminal background checks are required on all gun sales, including online and at gun shows.” Over 70 LGBT organizations, including the Human Rights Campaign, GLSEN, GLAAD, and the Gay Men’s Health Crisis, to name a very few, have signed that letter so far.

The Arcus Foundation letter reminds Congress that hate violence has increased greatly in recent years, “with a 20% increase in reported LGBTQ homicides in the U.S. between 2014 and 2015, according to a study released this week by The National Coalition of Anti-Violence Programs (NCAVP). Of the homicides reported last year, 62% were LGBTQ people of color.”

The LGBT community has always been a loose coalition of groups, and we remain just as diverse a community as is the larger community around us. That sometimes means that we have very different opinions about how to proceed in any given situation, but when we unite, there is power and wisdom and strength in our diversity.

Is the LGBT community strong enough to take on the massive and very rich NRA? I guess that remains to be seen, but as a community we have been successful at changing hearts and minds all across the country—and in a relatively short period of time. We are used to confronting outright lies about who we are as human beings; we will need to do the same when fighting the dogma of the NRA, and the misguided notion that purchasing without any restrictions, the kind of assault rifle used to kill 49 people in Orlando has anything to do with the rights promised in our constitution.

Our fight on this issue—and all other LGBT related issues—hinges on this election, and it has everything to do with which party controls the agenda of our courts, Congress, and the Presidency. As a community, we lulled ourselves into thinking that our success with gay marriage meant that our long struggle for LGBT rights was coming to an end. Sadly, and not to put down that success, we still have a long way to go. The backlash from gay marriage in the form of religious freedom protection, a dismantling of LGBT discrimination laws, and the scapegoating of the transgender community, in places like Mississippi and North Carolina can, and is, being replicated in other conservative states across the country.

Even though the visibility and acceptance of the LGBT community has increased dramatically in recent years, the conservative end of the religious community all over the world, is still preaching, teaching, praying, and actively working against us. In response to Orlando, a Sacramento pastor even preached that “they deserve what they got.” That creates an atmosphere of hate and a breeding ground for violence—to say nothing about the mental anguish it inflicts on the young LGBT people being raised in families within those organizations.

As a community, LGBT people have made ourselves visible. As a community we have always worked to protect ourselves from hate and indifference—and to create a safe environment for all of us. At the heart of the CAMP Rehoboth mission and purpose is the reminder that: “We seek to promote cooperation and understanding among all people, as we work to build safe, inclusive communities with room for all.

Fueled by terrorists, suspicion of refugees and immigrates, nationalism, and racism, the world in 2016 seems to live in the grip of fear. How else can we explain the rise of Donald Trump or the exit of Britain from the EU?

We humans are fickle creatures, quite capable of making terrible collective decisions based on fear, without understanding the ultimate consequences. It is easy to look back at the history of the world and, in retrospect, recognize the atrocious mistakes of our bloody past. The question is: are we capable of taking the necessary steps to prevent mistakes from happening while we are living through the events that create them?

I think we are.