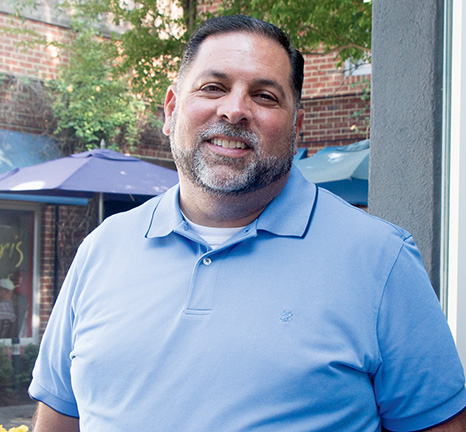 Jon Rania: A Song in His Heart

When asked where he was born, Jon Rania hangs his head slightly and replies, “Germany.” Germany. How come? His dad was in the US Army stationed at Bad Kreuznach which had been occupied by US troops since March 1945 and the fall of the Third Reich. When Jon was born in 1963, it was still West Germany. But in 1964, his family was transferred home to South Philly. That’s right. South Philadelphia “home of foods, feuds, and attytoods.” I was delighted because of all the neighborhoods in Philadelphia the one that is my favorite is South Philly, headquarters of the Gravy Wars.

South Philadelphia began as a satellite town of Philadelphia. Towards the end of the Industrial Revolution, the area saw rapid growth in population and urban development. This expansion was in part due to an influx of working class laborers and immigrants looking for factory jobs and dock work. The area continued to grow, becoming a vital part of Philadelphia’s large industrial base. The immigrants became the basis of South Philadelphia’s unique and vibrant culture that developed over the next several decades. Struggling to maintain their Catholic identity in a mostly Protestant city, they built a system of churches and parochial schools for their children, including Catholic high schools. The later immigrant populations of Italians and Poles were also Catholic. And they brought a unique dialect and cuisine that is now known as South Philly Italian.

Jon was born into a close family in the neighborhood. He was the oldest of three children and the only boy. His father worked for the City Court System, and his mom stayed home. He experienced one of the last and most highly developed “villages” growing up. There were no strangers and multiple “parents.” Jon can’t remember when music wasn’t a large piece of his life, especially church music. He received a black Wurlitzer Spinet for his sixth Christmas and it was “love at first sight.” He was attending Stella Maris School and took lessons from the Sisters. He sang in every school and church choir open to him and was accepted at St. John Neumann High School, a rare accomplishment. But halfway through his freshman year, Jon was accepted into the Philadelphia High School for Creative and Performing Arts, an even rarer accomplishment. Jon realized that not only was it essential to focus his life on music but that he loved churches of all denominations. The next avenue, after high school, was you guessed it, the seminary. Not everyone was thrilled at this choice and Jon was counseled to take a year off and take college courses in preparation for a lifetime commitment. But Jon discovered quickly that he felt incomplete without music in his daily life. This heralded a forty year career in professional church music. With thoughts of seminary put aside, Jon began the arduous journey, academically, and practically, of his music ministry.

For the next twenty years Jon served the music ministry of several churches in the Philadelphia area. The New Testament implies that ministry is a service to God. The music ministry is part of the whole ministry serving God through music. The music minister serves the Church services, weddings, funerals, directs the choir, trains the singers, plays the organ, and on and on. Jon worked as music minister at multiple churches including the oldest African American Church in America. Asked who inspired him, Jon doesn’t hesitate. My mother, father, and my grandparents. They embodied the concept of family. They loved, raised, and honored their family without cease or hesitation. Their work ethic was to work until the job was done correctly.

Additionally, Jon worked retail at the “shore” in the summers to make ends meet. Weary of non-stop work, Jon joined the court system in the City of Philadelphia. This allowed him to buy his grandmother’s house in south Philly, but the music ministry never faltered and Jon was working seven days a week.

He and his partner, Rob had begun stealing time for trips to Rehoboth in 1995 and when a church in Ocean City, Maryland offered him a job in 2001, a move to the beach happened. In 2003, they built their home in Rehoboth. In 2005, they became the first same sex couple in Delaware to have their name on their new son’s adoption record. A second son followed shortly thereafter.

In 2007, Jon was chosen as the Music Minister at Christ Church in Dover. Jon visibly brightens as he describes Christ Church as being on the forefront of serving all people, not just parishioners. This church community believes in helping all those in need without judgment.

How does he want to be remembered? He wants to continue his journey as a good father, a good husband, and a good person who served unstintingly all he came to touch through his life’s ministry.