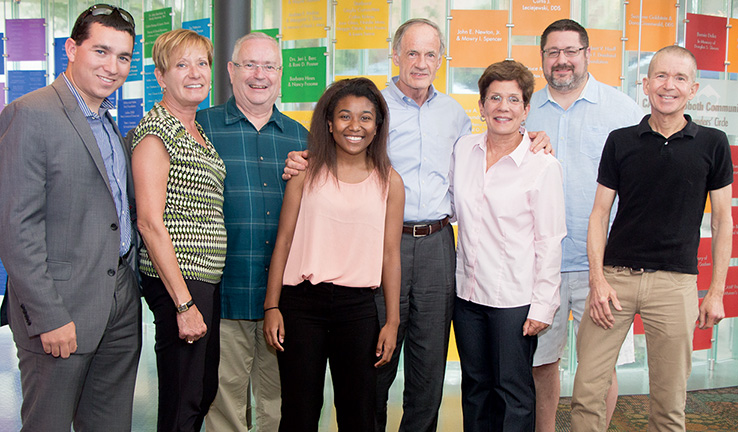 Midsummer in Rehoboth, as it has for almost 30 years, means signing up to be a Host, Supporter, or Sponsor of Sundance —CAMP Rehoboth’s two day, Labor Day Weekend  mega-party—this year to be held at the Rehoboth Mall. Max Dick and Natalie Moss (Sundance Co-chair) signed up early, and want everyone to do the same. “It takes hundreds of Hosts and Sponsors to make Sundance happen,” Natalie says, “so save us a call and sign up today!” Sundance is a two night event, with the Sundance Auction on September 3 and the Dance on September 4. Host, Supporter, and Sponsor packages are available at camprehoboth.com. The men of 6 Futcher Drive in Rehoboth Beach have done it again! This year, with close to 600 guests, their famous July 4th weekend Pool Party raised over $10,000 to support the work of CAMP Rehoboth. For the second year in a row, the Pool Party was sponsored by Devotion Vodka. Pool Party 2016 Hosts are (from left): Tony Sowers, Mike DeFlavia, Patrick Bosak, Christian Becker, Dennis Michael, Jeff Richard, Mike Reimer (Pool Party DJ), Lynden Armstrong, and Domenic Mannello. CAMP Rehoboth volunteers staffed the door of the event, and kept the coolers full. A Ray of Sunshine in CAMP Courtyard

Local celebrity Cheryl Blackman (with Lori Kline) may be fighting cancer, but her visit to the CAMP Courtyard made it a happy day. Email photos and memories for Cheryl. After four weeks of intense competition, Rick Nesmith, shown with Blue Moon owner Tim Ragan, was awarded the top spot in the 2016 Rehoboth Idol singing competition at the Blue Moon. There’s just no keeping Letters from CAMP Rehoboth on the ground! Leslie Campo and Claire Dente took off with it to Moustiers-Sainte-Marie, France. The women of Rehoboth Beach had more than a dozen issues of it onboard their Lisbon to Dublin Olivia cruise. Rehoboth Unitarian Universalists Jean Charles, Diane Corine, Margaret Keefe, and Anne Pikolas, traveled with it to the church’s General Assembly in Columbus Ohio.