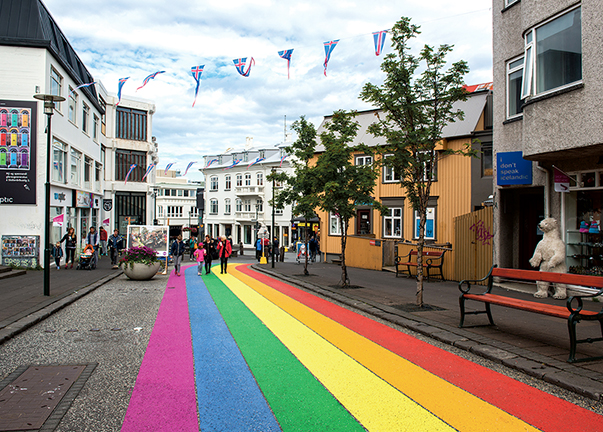 As you read this I am doing my final packing for a trip to Iceland.

Bonnie has always wanted to go there and she’s infected me with the wanderlust, too.

So in the midst of the scalding weather I’m packing sweaters, turtlenecks, waterproof socks, hiking boots, pants that zip off to become shorts (in case of a rare heat wave), and an opaque eye mask for sleep, as we should expect only two or three hours of darkness this time of year.

We’re taking electricity converters for our gadgets, a special Sim card for the phone—which, alas will have to suffice as my computer, plus a bag of guidebooks and maps. I expect that my column about our experiences will be thumbed on my phone.

It’s going to be an adventure! Especially since we will spend the 10-day trip traveling around the entire island nation of Iceland in a small recreational vehicle. Ah, you know we love a land yacht. But this was not our initial thought.

But after research Bonnie discovered that 10 days in a rental RV was about half the price of 10 nights in a hotel plus rental car. It was a no-brainer, especially since we adore traveling by RV and Iceland is noted for an RV culture. You can stop and stay anywhere—tourist sites, in cities, on farms, and of course, numerous RV parks. Sounded like fun to us.

We are set to travel to the land of glaciers, volcanoes, geo-thermal soaking pools, waterfalls, ice caves, puffins, whales, herring, and fish soup. Oh, and geysers, which they pronounce GEEZERS, which prompts me to ask what we old people are called.

But here’s the scary thing about our ten days on the road. I have reluctantly agreed, that except for our first night in Reykjavik (and I will explain this in a moment), we will make no advance reservations or plans to stay in particular places.

This consummate, some would say, pathological planner, will be flying by the seat of her pants, without a net. Wherever the trip takes us. Yikes! Yes, I have packed my anti-anxiety drugs. I’ll let you know if we wind up sharing quarters with chickens, goats, or Icelandic Trolls (a thing, apparently).

About the Icelandic language. Challenging! Fortunately, almost everyone in Iceland speaks English. But as in all countries, the natives appreciate foreigners making an attempt at speaking the local tongue. We will give it the old college try (an all-nighter fueled by beer, if I can think that far back!), but it’s going to be crazy.

From the Seljalandsfoss Waterfall and Kirkjubaejarklaustur town to the Snaefellsnes Peninsula and Upper Borgarfjordur, we’re in trouble. Maybe we should just stay in the towns of Vik and Hofsos just to make it simpler.

Now, about our first night in the capital city of Reykjavik: we fly overnight on August 5, arriving at 6:30 a.m. on August 6— just, by happenstance, hitting the city on the last day of the week-long 2016 Iceland Pride Celebration. We’ll be in time to attend the big parade.

And it is big. In 2014, over 90,000 people (one quarter of the country’s population, by the way) came to celebrate and catch the carnival-like festivities. So we figured we should drop our bags at a hotel, get in on the pride events, watch the parade, and then crash for a night’s sleep before setting out on the Ring Road in our rented RV.

From the renowned Blue Lagoon to the famous fjords, we’re hoping for a major adventure. Iceland’s most famous celebrity is the singer Bjork. If not remembered for her music, she is noted for that ridiculous swan dress she wore at the Oscars one year.

I’m looking forward to my first sip of Brennivin, Iceland’s signature distilled beverage. Bottoms up or Skol! And readers, as always, I will keep you posted.

Fay Jacobs is the author of As I Lay Frying—a Rehoboth Beach Memoir; Fried & True—Tales from Rehoboth Beach, For Frying Out Loud—Rehoboth Beach Diaries, and her newest book Time Fries—Aging Gracelessly in Rehoboth Beach. Photo by: Daria Medvedaya/Shutterstock.com.