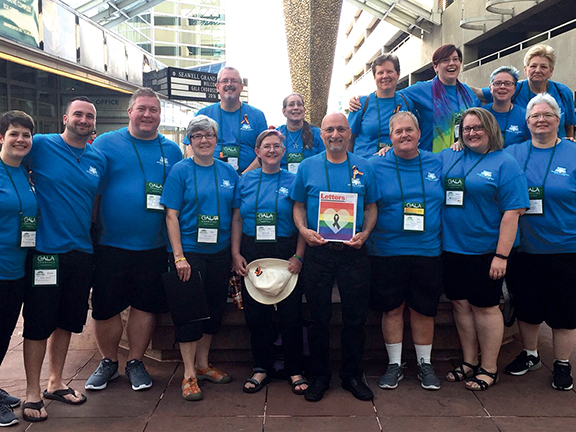 If Music Be the Food of Love...

Then, I was smitten in Denver. The GALA (Gay and Lesbian Association [of choruses]) 2016 Festival, held every four years, was the setting for over 6,700 LGBT GALA delegates. They represented over 230 choruses worldwide, including numerous American choruses, The Rainbow Chorale of Delaware, most Canadian provinces, and choruses as far away as the Ukraine, Cuba, Dublin, Beijing, Uganda, Germany, and Australia.

Choruses ranged in size from three members to over 400, each of which was allocated performance times. Music ranged from classical motets to rhythmic and percussive pieces, to comedic novelty tunes, to Broadway show tunes, secular and some sacred, and choral commissioned works, some with full-scale musical accompaniment.

While most of the over 275 performances during the six-day festival were entertaining, many were poignant and emotional. The opening ceremony was just weeks after the Orlando tragedy at the Pulse nightclub. Appropriately, a combined seven-chorus from Denver and other Colorado areas gave a Colorado welcome performance and paid tribute to our LGBT sisters and brothers. Their rendition of “America” with brass accompaniment created a sea of emotionally overwhelmed delegates; eyes were full of tears; and hearts filled with love.

When it came time for the Orlando Gay Chorus to give the full chorus concert, they received a standing applause. The Artistic Director gave introductory remarks expressing their appreciation to their LGBT sisters and brother choruses that sent donations, videos, and electronic and mailed testimonies of support. Their concert performance continued with standing ovations after each musical selection, followed by cheers and more applause by those in the outside arcade waiting for the OGC to exit the concert hall.

A number of choruses performed either individual pieces or a full concert of music many conveying the struggles, challenges, defiance, strengths, and victories of the LGBT voices. Not surprising, these musical “gospels” evoked feelings of sisterhood, brotherhood, and pride. Such was the case of the concert performance by the Boston Gay Men’s Chorus. The audio-visual and narrative introduction showed the determination of our New England brothers as they jumped hurdle after hurdle to present a concert in Istanbul, Turkey. How amazing is that! What a mission for a 200 plus member gay chorus giving a concert in an Islamic country.

All of this, and much more is just the tip of the iceberg. It is impossible to convey the power, affirmation, feeling of belonging, and pride of being a part of this wonderful world of music.