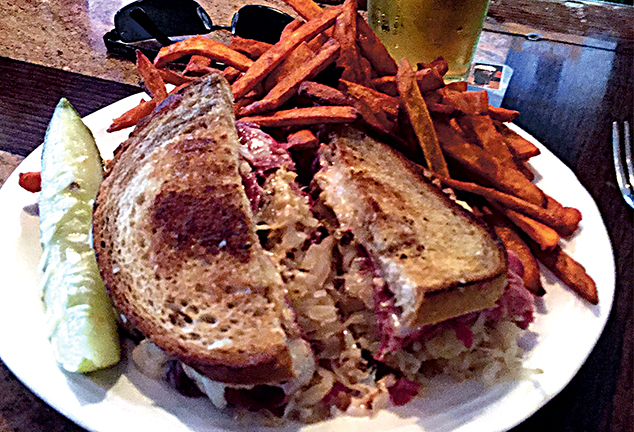 Come to the Outer Gayborhood!

Everyone knows that downtown Rehoboth Beach has a number of great gay-owned restaurants and that the rest are incredibly gay friendly—since 1974, when the Back Porch Café opened here, it’s been a welcoming community.

Now, there’s a proliferation of gay-owned venues on the outer stretches of Rehoboth Avenue, or Rehoboth Avenue Extended as it is called, that we can now identify as The Outer Gayborhood.

Depending on whether you are going north from town, or south, into town, the new stretch starts or stops at the canal bridge. Let’s go north.
First up is Pasqualini’s the gay-owned bakery that’s been giving us our just desserts on site for 16 years now. Moving right along, you have the Double L Bar, both building and business under new ownership. Word is that in addition to the bar and inside dance club space (all shiny and fixed up), the patio is a very welcoming place for a diverse group of revelers— including well-behaved pups for a yappy hour. Indeed, I hear that their happy hour on the patio is terrific. I’ll venture in for a report shortly!

Across the street is The Shore Inn, which of course is not an eatery or drinkery, but they do have a legendary happy hour for their guests.
A little further up the street we have The Swell (in the spot Big Sissies used to occupy), recently re-opened after a devastating fire last year. According to owners Helen Fasnaught and Jamie Forschey, a person could have had a baby in the time it took them to re-open, what with insurance, construction, inspectors, and the like. But it’s back now, with new floors, restroom, décor, and the same comfortable bar.
There’s a new chef, William Warner, in the kitchen, along with several other well-known local cooks helping out. I didn’t get to sample a dinner yet, but I will tell you that their sticky bun dessert, with caramel and chocolate and whipped cream is fantastic! Big enough to share, but you might not want to.

And there’s superstar bartender Steph Dalee behind the bar on occasion. She’s a mixology legend from the late lamented Cloud 9 and Seafood Shack. Come visit her at The Swell!

Wandering into the adjacent parking lot, there are two fairly new venues. The first we come to is Java Jukebox, a coffee bar and event venue. Check them out in the morning for your java jolt, then watch the schedule for musicians and comics in the performance space. It’s a great concept by DJ Nan Martino and her spouse Kris and should be a great anchor for the gayborhood. It’s next up on my schedule for a hot coffee and a look-see.

Also in the same line of shops (all with free parking by the way) is Murph’s, celebrating not only its one year anniversary, but its switch to a whole new menu and upgraded service with —I know you’ve been waiting—real plates and utensils. Bye, bye plastic forks and paper plates. Hello to one of the best Rueben sandwiches I’ve had in Delaware.

Murph’s new menu includes full dinners, salads, meats by Hickman’s and desserts by Pasqualinis. Owner Joanne Ketler says, “We’re a year in, establishing a wonderful customer base and having a blast.”

Part of that blast is fueled by John Flynn and Matt Kenworthy and their dueling pianos, at Murph’s Saturday and Sunday nights. It’s fun and a thrill to watch such great entertainers.

And speaking of music, Natalie O’Neill, your singing bartender, mixes drinks and matches it with song. It’s so much fun. And no, I could not file this report without mentioning my friend Ginger behind the bar, too, mixing me a Faytini, or my new personal favorite, a Moscow Mule (proper metallic cup included).

And the best part of the Outer Gayborhood is the cooperation nourished between all the venues. They all help each other, rotate entertainers, and support the whole stretch of real estate that has become a real village. And heaven knows, the community needs to come together and support each other more than ever.

So check out the Outer Gayborhood. It makes a pub crawl easy as pie—a Pasqualini pie.