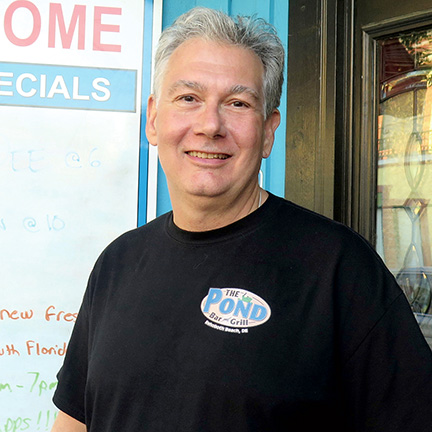 Tal padre, tal figlio. An Italian expression meaning like father, like son. Gino’s Boy. Pete Borsari is quick to tell how he was buttonholed in his home town of Plymouth, Mass. His dad was an immensely popular and well known man in the area. Pete says that he couldn’t get away with anything but received benefits and bonuses from being known as Gino’s Boy. His dad was an Insurance Man who knew no strangers. He belonged to the Cabot Club, the Knights of Columbus, the Kiwanis, and played the trumpet in the American Legion Band. Pete’s mother ran the family; there was no “wait until your dad gets home” in the Borsari household. Along with her home life duties, she worked at the Jordan Hospital as a registered nurse. And of course the family attended church together every Sunday.

Plymouth is one of the oldest towns in the country. Founded in 1620 by the Pilgrim passengers of the Mayflower, it is the largest municipality by area in Massachusetts and holds a place of great prominence in American history, folklore, and culture. It is known as “America’s Hometown.” Pete’s father’s family emigrated from Italy in the early 1900s to work in the mills which were a booming industry in New England. His mother’s family were Portuguese fishermen who had been in New England since the 17th century. Pete’s roots were solidly in Plymouth.

Pete and his sister attended public school. In high school Pete began to want to see a world outside Plymouth. He denies feeling hemmed in or constrained by Plymouth but felt that something new would do him good. He was accepted at Beloit College in Wisconsin. Interestingly, Beloit College was founded in 1846 by seven pioneers from New England. But Pete denies any specific plan or reason for choosing Beloit. “It just seemed to be the thing to do.”

Pete graduated in 1980 with a degree in Chemistry. He returned home and got started in his eventual career in food service. He worked as a bartender and server on Cape Cod at the La Quinta Inn. This opened a new world for him but to say that his family was unhappy at his work choice was an understatement. It became quite clear that remaining in this endeavor was not a possibility. Serendipitously, his college adviser put him in touch with a former law school professor in D.C. and by 1981 he started as a patent searcher with the Washington firm of Cushman, Darby, & Cushman. Why patents? Pete lifts his eyebrows and reminds me that he had a chemistry degree. OK. He soon went to work for Union Carbide Corporation and began attending The National Law Center at George Washington University.

In 1986, Pete received his law degree and started his own practice. He founded Borsari & Associates in 1993 to prepare and prosecute patent and trademark applications before the United States Patent and Trademark Office. He shortly began to work with associates all over the world obtaining international protection. Pete will tell you that he concentrated in giving applicants a good assessment and fair pricing. He provided liaison support to his clients as their applications wended their way through the systems.

Pete estimates that he has shepherded over five thousand patentability, infringement, validity, and ownership searches in the fields of chemistry and biochemistry. He reports intense involvement with batteries, ceramics, cosmetics, food packaging, petro-chemistry, and pharmaceuticals. But he emphasizes that there is very little that is new and it is a matter of pride with him that he represented the odds of success fairly and realistically to the applicants. He sees the humor in consulting with clients who have paid $5000 to a television patent law firm and not gotten a patent. Pete takes great pride in his reputation for presenting the facts clearly, rationally, and cost effectively to his clients in order to avoid a “dead end.”

“Who inspired you, Pete?” “My, Godfather, John. He had it together. He didn’t overthink.”

When asked how he got to the beach, he begins with advising that summer in DC commits you to going out of town. In the ‘90s, he and his partner began visiting Rehoboth Beach. In 1999, they bought a condo in the Henlopen. In 2002, Pete’s partner bought The Frogg Pond. Why? His partner wanted to move to the beach Pete relates that he didn’t stop to question, “It seemed like the right thing to do at the time.” He sold his law firm and in 2003 moved to a new home and a new life in Rehoboth Beach. His previous stints in food and bar management came back into play. The Pond became his life’s work.
When asked what he wants to be his legacy, he ponders. “I want my nieces, nephews, and God-children to remember me as a loving and involved figure in their lives.”