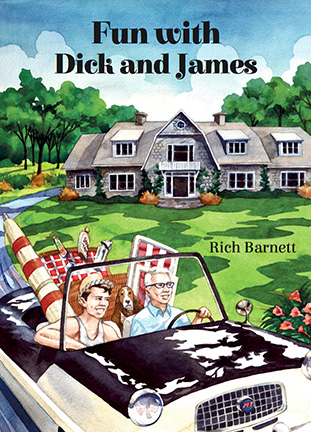 This summer marks the tenth year that I’ve been writing this column.

At fifteen per year, it means I’ve penned a total of 150 of them. If each column is about 800 words, that translates to approximately 120,000 words. It’s the approximate equivalent of two novels worth of material, according to Amazon.com.

Speaking of words and books, I’m pleased to announce my new book will be published and available at Proud Bookstore, Browseabout Books, and on Amazon.com later this month. It’s called Fun with Dick and James, and it’s centered on the escapades of a fictitious gay couple living in Rehoboth. At 33,000 words and 183 pages, it was quite an endeavor, especially because fiction isn’t normally this fella’s cup of tea.

For someone used to writing nonfiction with word limits and deadlines, the freedom that comes from writing fiction is exhilarating. I can fib. I can let my imagination run free. Yet, there’s a reason why people say truth is stranger than fiction, because fiction must also make sense. We all know truth doesn’t have to make sense or else the Donald Trump phenomena wouldn’t exist.

Anyhow, the project started when a local publisher approached me about doing a book. She was convinced I was the right writer to write a Wooster and Jeeves meets Tales of the City type gay sitcom based in Rehoboth. Of course, I was flattered. Who wouldn’t be? The thought of actually writing a fiction book, however, felt daunting. Where to start? Some experts say you must start a book with action. Grab them in the first paragraph, they say, or you’ve lost them. Others say no, you should start by creating tension because what good is action without context. And how does action at the beginning fit the classic notion of the story arc with its rising tension, climax, and declining tension? It was enough to make my head explode.

But it was the notion of creating my version of Tales of the City that sold me because that book has a special meaning in my life—it was the first gay book I ever bought.

While still a student at the University of Virginia, I ventured to Washington with a group of friends to drink in the numerous Georgetown bars catering to the college crowd. Anyone remember the Chinese Disco? The real one? Not the faux revival that opened a few years ago. Long story short, like a homing pigeon I somehow found my way that weekend to the old Lambda Rising bookstore and Armistead Maupin’s book, which opened my eyes to a gay new world. All the words I feared were there in one book. But in Maupin’s book these words weren’t ugly or hateful; they were fun. And they helped change my perception of what life as a young gay man could be.

Maupin later felt even more like a friend when I read more about his characters of Barbary Lane. I learned he spent his childhood in North Carolina, as I did, and that he turned his back on his law school education, as I had too, in pursuit of something more satisfying. After all these years, I still have that original first edition book. I keep it out on my living room coffee table.

I mention this not because I think my work comes anywhere close to anything Armistead Maupin has written —I’m not that arrogant—but because once again his writing has provided me with both motivation and inspiration.

Most of you probably know that Armistead Maupin started out writing 800 word vignettes for the San Francisco Chronicle that eventually he combined and published in a series of books. He didn’t really plot them out, at least not at first, because he had to produce one column five days a week. I can’t imagine, seeing how I can barely handle one every two weeks! He just wrote and let his characters take him where they wanted to go. In his own words he “let the sourdough rise.”

So that’s what I tried to do with this book. I started with small vignettes and slowly and surely fleshed them out. I’d write a little, let them sit, then go back and write a little more. Eventually, I ended up with 12 scenes that average around 2,750 words each. Maupin also created memorable characters from the people he knew and saw, and scenes from his life and the lives of others. I’ve tried to do that too, pulling from things I’ve written and thought and heard about. And like Maupin, I’ve left out the graphic details.

And you know what? It wasn’t so frightening after all. It was challenging for sure, and it actually was fun. Now, after 13 months kneading and working the dough, I have a loaf. Now I just hope it tastes good.