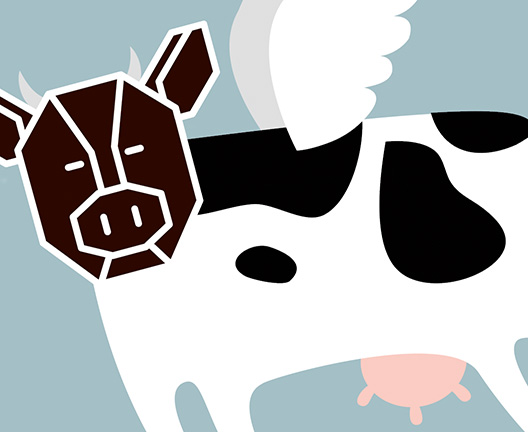 I had a dream about alien cows.

It was one of those dreams that seem remarkable because it was so detailed and life-like, and yet at the same time, “utterly” absurd (sorry, I couldn’t help it)—and faintly ominous too. The alien cows first appeared above a distant horizon, flying in much the same formation as a huge flock of migrating geese. They were all black and white spotted, with large wings attached to their sides. As I came into closer contact with them during the dream, I discovered a variety of head styles—some had goat heads; some, pig faces, among others—and they became increasingly more threatening as the dream progressed. By the time I woke up it was almost a full scale alien invasion.

In truth, of course, none of us is ever particularly interested in the dreams of others. This one stuck with me because it amused me. It also got me thinking about the human imagination and the many ways we use it to create the world around us. Even in dreams, human beings are creative, and creativity is a core component of what makes us human.

As children, we learn by pretending to be grown-ups, by acting out the characters in the stories we listen to, and by creating imaginary friends and stories of our own. Fairy tales and nursery rhymes teach us basic lessons about what it means to be human.

Even as adults, we are at our best when we are relaxed and playful—when we are able to use our imaginations. When we are doing exactly what we love the most, work and play can almost become the same thing—at least it feels the same to us.

Books, movies, plays, art, design, architecture, engineering, almost any field we can name—even science and math—depend on the human imagination to create a way forward. We grow because we are able to imagine change into existence.

CAMP Rehoboth was built on the premise of “creating a more positive” world. That means that we had to imagine a world the way we would like it to be, and then concentrate our efforts in making that imagined world into the real one. Activists have always done that: seen an injustice, and worked to correct it. When Rosa Parks refused to give up her seat on a Montgomery, Alabama bus 60 years ago because the bus driver ordered her to give it to a white person, she was imagining a world without segregation—and she was making that dream a reality.

When the patrons of the Stonewall Inn in June of 1969 stood up to the New York City police raiding that Greenwich Village bar, they were imagining a world where gay people were not harassed for simply being themselves. Their actions that night gave birth to the modern gay rights movement, and changed the world for all of us.

In 1985 AIDS activist Cleve Jones looked at a wall covered in signs remembering those lost to AIDS, and imagined the NAMES Project Memorial Quilt as a way to focus attention on the devastation being caused by that disease. In the decades that followed, AIDS organizations all over the world imagined a world without AIDS. We are not completely there yet, but think of the progress that has been made!

In 1978, a San Francisco artist by the name of Gilbert Baker was inspired by Harvey Milk to imagine a symbol representing LGBT pride—and the rainbow flag was born. Today it is a symbol recognized around the world.

In 1971 John Lennon sat down at a piano and in almost one sitting wrote the song “Imagine.” It became the best-selling single of his solo career. Its lyrics paint a picture of a peaceful world without the divisions of nationality and religion. In a 1980 interview with David Sheff for Playboy magazine, Lennon commented on the song: “The concept of positive prayer.... If you can imagine a world at peace, with no denominations of religion—not without religion but without this my-God-is-bigger-than-your-God thing—then it can be true.”

Rosa Parks, the drag queens and patrons of the Stonewall Inn, Cleve Jones Gilbert Baker and Harvey Milk, and John Lennon all imagined a better reality than their existing circumstances. The human mind is also quite capable of giving into fear and hatred, and imagining a far darker place—a selfish and prejudiced world of war and walls—instead of rainbows and peace. That battle between good and evil can be understood with a quick look into our own psyche, where we all face choices on a day-to-day basis about what kind of human beings we want to be. Our human mythologies are full of tales of that struggle, and it is a favorite subject matter for writers in all genres from Star Wars to the Harry Potter books.

In Harry Potter and the Order of the Phoenix, author JK Rowling—certainly one of our most imaginative modern storytellers—has Sirius Black explain to Harry: “We've all got both light and dark inside us. What matters is the part we choose to act on. That's who we really are.”

From terrorists attacks and mass shootings, to racism and transphobia our world can feel like a frightening place to many, but we cannot let that fear divide us, or make us afraid of someone simply because they are a different nationality, or from a different religion, or come from a different economic background, or have a different sexual identity from our own. Our imagination is a powerful tool for transformation, and with it we can create a world that does not give in to fear—a world that recognizes that the rainbow is not just an LGBT symbol, but a symbol that celebrates the diversity of all people. Together we can create a world that does something about global warming, that cares for the hungry and the homeless, the welcomes refugees, and continually works for the equality of all people.

Imagine all the people
Living for today... Aha-ah...

You may say I’m a dreamer
But I’m not the only one
I hope someday you’ll join us
And the world will be as one.