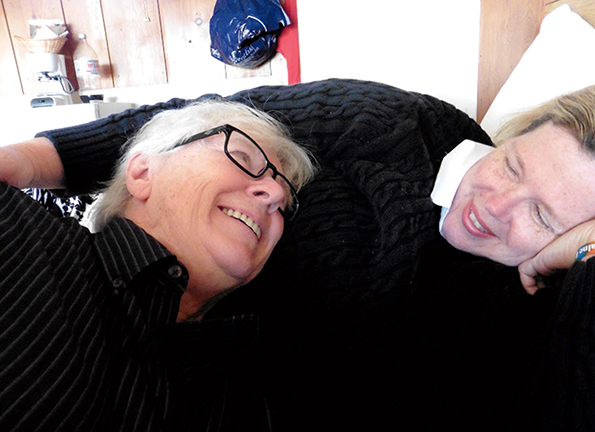 My sweetheart and I don’t pay much attention to roles in our marriage. For one thing, she’s the more able-bodied spouse and taller. It’s not likely to be me at the top of our six foot ladder, heaving storage boxes onto the garage rafters. And when UPS brings the “some assembly required” contraptions to our door? I usually hand my sweetheart the box cutter and the screwdriver and, when she finishes, the oohs and ahs.

Laundry is a whole other matter. She says it’s always been her thing. The only comment she ever made about my laundry skills was a question, “Why don’t you buy some new underwear/towels/socks? We’ll toss these.” I was horrified. Early on, she announced that she would be doing the laundry in the future.

Hey, I wasn’t about to argue. I made myself useful in other ways and listened carefully during training sessions. I hadn’t even known that, with the right care, white didn’t fade to gray. I thought two weeks was a perfectly respectable length of time to wear one pair of jeans. Why waste water? Think of the environment!

We have three upright laundry baskets. At first, darks were on the left. On the right were whites, and the middle basket was unsorted until otherwise determined by no one other than my sweetheart. After several years, the determination was that I still couldn’t determine what went where.

We now have a hers basket each and a whites basket, but by careful observation, I have noticed some items that are not all white go in with the whites anyway. I occasionally, boldly, test this theory by hanging a wet whitish thing on the side of the whites basket. My sweetheart is saintly about not criticizing me. Or maybe I should be grateful for all that management training she’s undergone.

In the name of progress, and possibly to reward my sincere attempts to understand this laundry thing, I gradually began taking on folding duties. I am also allowed to place the wet clothes in the dryer and even turn the dryer on when and if instructed to do so. However, I am never, never allowed to fire up the dryer unless my sweetheart is here so that she can immediately fold. She folds the shirts, jeans—all the important stuff. When I said I was promoted to folding, I meant folding underwear, washcloths, socks—the less pressing articles, so to speak.

We both clean out the dryer filter, she, before she turns on the dryer, me, after the clothes are dry. Laundry methodology; it really works out the same in the end.

Prior to becoming a couple, I found the concept of folding unique. My sweetheart folds beautifully. That task was something I carefully unlearned a very long time ago in one of those revelatory moments when I stood at my dresser with an armload of underwear and went ah-ha! prior to stuffing every last piece into the drawer. In all practicality, why does underwear need to be neat? Is this a femme thing?

Tip: Never set a full basket of clean laundry down in the same room as the kitty litter box and forget it. Needless to say, we bade farewell to those no longer resplendent articles.

My sweetheart points out that I have standards, too. For example, no cleaning rag is tossed out except by me. I have hidden stashes so I always have supplies for kitty or doggy accidents, to slop up my cooking messes, for spilled potting soil, fertilizers, and after oiling my tryke in the garage. The microfiber cloths repose in their own special plastic basin under the sink and nowhere else, thank you very much.

All detergents must be fragrance free.

Shirts get squished into my closet. Except flannel shirts and sweatshirts. They are folded to go in a drawer. And t-shirts go on a shelf. And longsleeve t-shirts go on another shelf. Then there are good jeans that are hung up and scrungy jeans (not as scrungy as they once were) that are folded on a shelf. Recently, my grandmother’s red rocking chair has become the default repository for my clean and neat wardrobe. When the stack reaches a precarious height, I disperse it.

We spar over shelf space. I insist on shunting my clothes into far corners to make room for my wife’s. She leaves whole shelves open for me to store my things neatly and hopes I will fill them. Neatly. Recently, and without my knowledge, a case of paper towels found its way to an empty shelf. You could call it a compromise.

Alas, I’m a rebel at heart: In the hidden recess of my top drawer are my boxer shorts. They roll just as good as they fold and there are no telltale wrinkles.