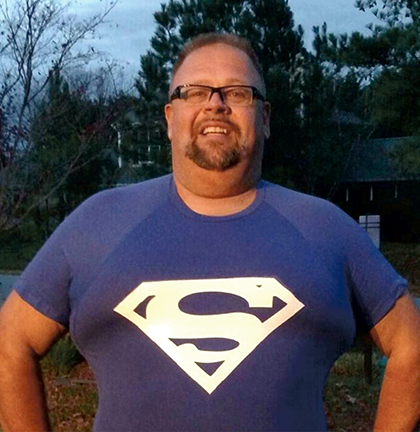 “Æblet falder ikke langt fra stammen.” When talking with Bryan Hecksher about what is important to him, this Danish bit of wisdom pops up unbidden. “The apple doesn’t fall far from the tree.” A third generation American, Bryan speaks with awe about his Danish forbearers. His great grandfather, a Danish boat captain, settled his family in Lester, PA, near what is now the Philadelphia International Airport. His parents and grandparents were uniformly described as hard workers. And, as stated above, “the apple doesn’t fall far…”

Bryan was the first of seven children. His mother and father were active parents, overseeing manners, activities, school, home life, and every other part of their existence. His father and mother emphasized hard work and keeping their “nose clean.” Bryan acknowledges that he stayed in line and was, as a youngster, very quiet. He worked hard in school but could never grasp algebra and no amount of wheedling got him excused for doing poorly. In high school, he went to work as a pizza deliveryman. Bryan delivered pizza part time for the next eleven years.

Bryan has always loved cars and has always been ready for challenges. Still in high school and only 17 years old, he went to work at Christy Chrysler Plymouth as a salesman. “A Salesman! How did the other guys treat you?” Laughing, Bryan reports, “They ignored me. “ Why did you do this?” “I went to buy a car and the salesman was rude.”

Bryan admits he had a lot of juggling to do to manage pizza delivery, high school, and car sales. But somehow it all worked out and he graduated from Interboro Senior High School in 1982. OK, now full time car sales. No. Bryan had always wanted to be a police officer and headed for Delaware County Community College to study Criminal Justice. He then attended the Municipal Police Academy. In case, anyone is wondering what he did in his spare time while attending the Police Academy, he sold cars and delivered pizza.

In 1985, Bryan became a municipal police officer. In 1986, his life was changed. He was in a major motor vehicle accident, hit by a drunk driver in a trash truck. He was in the hospital for 86 days; pins and plates were drilled into his bones. Bryan says, “Your life can change in an instant. A second is all it takes.” This was the end of law enforcement for him but not for his willingness to help, do good, and give back.

He went to work at a Juvenile Detention Center, wanting to make a difference. But this grew harder and harder. He struggled to connect with kids without any family guidance. He worked harder and harder to make a difference. He became disillusioned, a feeling not natural to him. In 1991, he called it quits. He realized that working with kids is not the only way to make the world a better place.

Bryan headed back to car sales. His natural ability to connect with people on multiple levels defined his work. Bryan understands that transportation defines a huge part of our lives. The great disconnect between getting to work, to the store, to the hospital, to our families is in the hands of frequently ugly people. Bryan integrates the complex factors that define our transportation choices and requirements. Bryan knows that it isn’t just cost or color but an intrinsic part of our lives.

In the mid-nineties, Bryan’s community pilgrimage began with weekend trips to Rehoboth. By 2004, he was hooked. He moved to the beach and began selling cars for Mark Slaughter. The Slaughter cars had for years in Southern Delaware made a statement: fun, costly, status, prestige. Ultimately Bryan struggled with this picture. He understood that our community is full and a true cross section of America. He became more worried by his inability to help his customers get to work, to the hospital, to the store, and to their families than to go to the beach in style. In 2007, Bryan opened the Auto Gallery. Why? To get rich? To keep it all? Absolutely not.

Then and now, Bryan’s commitment to integrate the essential travel ingredient into the total community drove him. And who inspired him? My Dad and Mom. They believed in helping others and taught it daily in words and actions. Helping others was a binding tenant in our home. And anyone who knows him knows that he will always say yes to helping others without reservation or judgement.

And your legacy, Bryan, what do you hope it will be? He has to think. His expression is very serious as he struggles with the words. “I hope that I will be remembered for being kind to others.” As I think about it, I think he’ll get his wish.