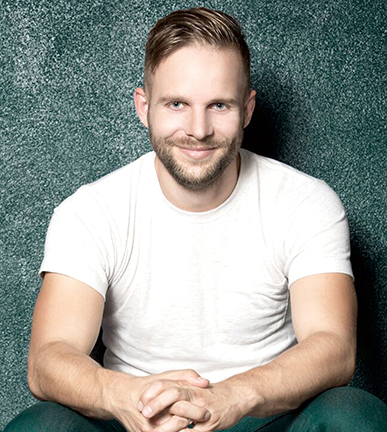 Performer Tom Goss “Bears” It All in Song

Who would be better to sing the praises of the Bear Community than singer-songwriter Tom Goss? With alabaster skin and piercing blue eyes, Goss is a guitar toting, power-pop prodigy with five studio albums, one live album, two EPs, and multiple non-album singles under his belt. One of those singles is titled “Bears,” and the video for the song received over half a million YouTube hits and downloads worldwide. Its success gained Goss invitations to Bear Festivals around the world, most notably Bear Week in Provincetown, Massachusetts and the Great British Bear Bash in Manchester, UK. Goss now adds Rehoboth Beach, Delaware to the list!

“We are delighted to announce that Tom Goss will be the headliner for this year’s Bear Weekend, which will take place September 15-18,” says John Lucas. Lucas serves on the board for the Rehoboth Beach Bears, a local nonprofit organization that nurtures a sense of community among Bears, a subset of the gay male culture that describes large, burly, often hairy men. Last year the Rehoboth Beach Bears hosted its first Bear Weekend, and nearly 200 men came for four days of fun and camaraderie. Proceeds from the 2015 event were donated to three local charities: the Delaware AIDS Walk, the Harry K. Foundation, and CAMP Rehoboth.

The Rehoboth Beach Bears are building on the success of last year’s event. The group will still have gatherings at the Atlantic Sands (the host hotel for the weekend) and at several popular bars around town, including Aqua, The Pond, Lula Brazil, and the Purple Parrot. For a second year, CAMP Rehoboth will host a bear-oriented Art Show. New this year will be workshops for Weekend Pass Holders, on topics such as Pre-Exposure Prophylaxis (PrEP) for HIV, retirement planning, and “Healthcare for the Average Bear.” However, the appearances by Tom Goss are already generating the most buzz for this year’s Bear Weekend.

“Tom will perform two shows at the Clear Space Theatre on Saturday night, September 17,” explains Bear Board member Ken Mahan. “Goss will perform at 7 p.m. and 9 p.m. His shows will include his popular hits ‘Bears’ and ‘Make Believe,’ along with his most recent hit song ‘Son of a Preacher Man,’ a cover song with a whole new twist and message. Goss will also be the emcee for the Friday night FUN ’n FUR Dance Party with Philly-based DJ Carl Michaels.”

Tom Goss obviously has a soft spot in his heart for bears. In fact, he married one! As he explained to The Washington Blade, who named him “Best Gay Musician” in 2011 and 2012, “I really wanted to represent the bear community as a whole instead of a subset of the [gay] community.” Goss went on to describe the process for writing the song. “The chorus—‘Bears, I don’t discriminate / I’ll take a cub, a chub to circumnavigate / Steal my heart and let it percolate, all night, all right’—was the first thing to get written. And I knew I wanted the song to be big and meaty, so I used the E chord, which I think is the meatiest chord of them all.” Goss thinks of himself as a storyteller just as much as a songwriter and performer. Listeners can expect to be moved into a lot of different emotions, and to have fun while doing so.

Hearing Tom Goss sing has special meaning to one local Bear Couple. When Michael Tipton and Eric Meyer got married in Rehoboth Beach last year, their wedding ceremony included one very special song: a love song written by Michael—and recorded specially for the ceremony by Tom Goss! “Michael wrote the words and the music, and the song said exactly what we feel for each other. Through mutual friends, I got in touch with Tom and asked if he would record the vocals. He was so sweet and easy to deal with! That’s part of the reason I love Tom Goss and I love the Bear Community. It’s not really about having a certain look. It’s all about getting along with one another and being there for one another!”

Ultimately for Goss, his music-making is about connecting and communicating, being a voice for others: “If by putting these songs out there, I can say something that somebody else wants to say, and somebody else wants to articulate—and by hearing a song they understand a little bit more about their life or their relationship, or they question more…then I feel like I’ve accomplished something.”

Tickets for the Tom Goss performance on September 17 are currently available only as part of the Bear Weekend Package Pass. Individual tickets may go on sale closer to the event date, if seats are still available. Weekend Package Passes can be purchased online at RehobothBeachBears.com. Early Bird Registration is in effect through May 31, at a $15.00 savings.