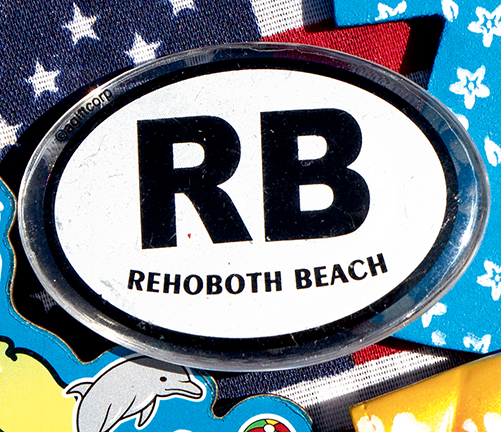 I still remember the first time I came to Rehoboth Beach more than 35 years ago. It was springtime, and our friend Joe McMahan had invited Steve and me to share a beach house for the summer season, so the three of us drove over from DC to find a place. Steve had been here a couple of times before we met; for me it was all brand new.

We settled on a little house on Norfolk Street (right next door to the Christian Science Church), and happily took possession of it just in time for Memorial Day weekend. The Blue Moon had only recently opened for the first time, and its bar had not yet been established as the happy hour place it quickly become during the early 1980s. I know I’ve said this more than once in these pages over the years, but back then, after a day on the beach, a group of us would gather on the church lawn to play croquet and drink frozen daiquiris.

That was the beginning of our love affair with Rehoboth Beach, and we never looked back. Even after we moved to NYC in the mid-‘80s, Rehoboth continued to be our summer home. By the time we moved here full-time, a decade after that first visit, we were already deeply immersed in the life and rhythm of this little summer resort. Now, a quarter century later, it is simply “home.”

I always remember celebrating the Memorial Day weekend, but it wasn’t until we started coming to a seasonal beach resort every weekend that it became such an important mile marker along our annual journey through the months of the year.

This Memorial Day weekend makes me think about all the ways the world has changed since that first visit to Rehoboth years ago. On that day, the cornfields were plentiful all along Route One, beach properties were cheap, there were no iPhones—no cell phones for that matter, or even personal computers, to speak of. The precursor to Poodle Beach was much further into the no-mans-land beyond the private Carpenter’s Beach, between Rehoboth and Dewey—and required quite a hike to get there. The Blue Moon was just opening the doors on its decade’s long run as queen of Baltimore Avenue, and The Renegade was the place to dance. AIDS was just beginning to make itself known, though not by that name, and most of us had no inkling that our innocence was about to shattered in such a profound way. CAMP Rehoboth was yet to be born.

Now, all these years later, we live in a complicated, high-speed, internet connected world that never stops, and yet there is still something incredibly simple about the idea of spending Memorial Day weekend at the beach. It is a time for friends and family, and a time to step outside of the rush and hustle of our everyday lives.

That is true of Memorial Day in beach resorts all over the country, but what we are especially thankful for in Rehoboth Beach is the incredible community we have all built here over the years. CAMP Rehoboth has been working for change in this community for over 25 years, and we have preached a continual message about “creating a more positive” world for all that time.

A few years before my father died, he visited us here in Rehoboth. While he was here we took a nice stroll around the town, and when we got back home to Baltimore Avenue, he turned to me and said: “I don’t think I’ve ever been in a place where the people are so open.”

CAMP Rehoboth did not create that spirit of openness, but we have done all we possibly could to add to it and promote it whenever possible. Creating a positive force for change, I’m convinced, attracts people—which is quite possibly why so many people give so generously of their time, talents, and resources to support the work of CAMP Rehoboth.

On May 7, CAMP Rehoboth celebrated the 475 volunteers who gave of their time during the past year to help CAMP Rehoboth and all of our projects, programs, and events, succeed. That’s an amazing number! Or take a look at the membership list in this issue—every person on that list helps to provide steady income throughout the year to support the work of CAMP Rehoboth. Add to that our Annual and Premier Annual Sponsors, our event sponsors, supporters and hosts, donors, the organizations we partner with, everyone who accesses our services or website or reads Letters from CAMP Rehoboth, and our circle of positivity grows even larger.

A couple of years ago, in the heady rush surrounding the advent of marriage equality in this country, it almost seemed possible that the days of continually working to change hearts and minds on LGBT matters might be coming to an end. That belief has been proved to be not much more than a hopeful fantasy by the ugliness of current politics—and there is an ominous wind blowing in from North Carolina and Mississippi under the guise of religious freedom. Suddenly it seems more important than ever that we do not falter in our continuing efforts to create a world that offers full inclusion to everyone.

For now, we are well protected in Delaware by our “blue state” status. That could change if we don’t continue to do our work.

Memorial Day is a day to remember those who died while serving in the armed forces of our country. Those soldiers were fighting for our freedom, and it would do their memory a disservice if we did not also continue to fight for the equality of all Americans for as long as it takes.

For the moment, however, put aside the work, the stress, and the anxiety this election season seems to induce, and sit back and enjoy Memorial Day weekend at the beach.