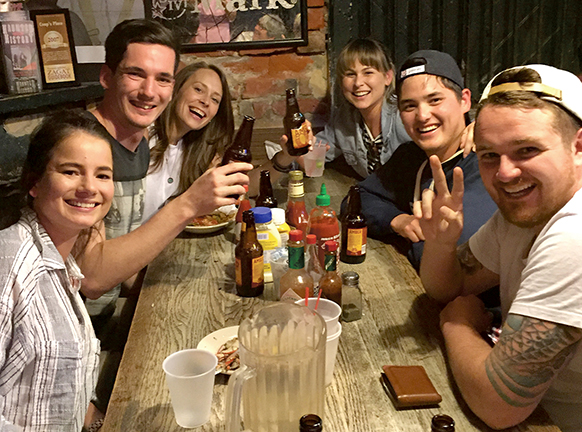 Like the characters Velma and Roxie from the musical Chicago sing, “Whatever happened to class?”

I mention this mostly because of Donald Trump. He has ignited a giant, oozing mass of boorish, classless, disrespectful voters, bent on dividing, stigmatizing and making it alright, if not downright popular, to express hatred. And I’ve had some sad examples presented to me over the past few months.

I was outside a restaurant, having a hard time finding a parking place, when I saw a car with its back-up lights on, sitting, idling in place. I sat there watching for a full minute and then politely asked, “Are you leaving?”

The driver spat, “I’m looking something up on the GPS. This space belongs to me until I decide to leave it!”

Wow. That’s a lot of energy spent on random hostility. Oh, and his car wore a Trump bumper sticker.

Then one day I walked into an empty restaurant with hours posted as 11:30 a.m.-9 p.m. It was a quarter to noon. A grumpy guy hollered from the back, admonishing me for being there by saying, “I just opened, still have to set up, I have twenty minutes of work to do. I can’t wait on anybody yet.”

And if those two incidents didn’t push my buttons enough, I walked into an elevator down in Fort Lauderdale and said, with a smile, to the woman leaning her belly against the panel with the floor numbers on it, “Could you please press three for me?”

“I’m not the elevator operator!” she shot back, showing no willingness to move so I could push my own buttons.

I backed out and took the steps.

Of course, when discussing hateful and boorish, how can we ignore the recent North Carolina bathroom law? In the world of fantasy problems invented just to marginalize transgender people wanting to pee, this one is classic. Innocent children have a greater chance of being molested by a Republican lawmaker than by a transgender individual. And that’s based on actual facts. Where do you pee, Dennis Hastert?

Okay, I’m pissed, but at least I can be so and do so in the bathroom of my choice.

But just when I was ready to declare boorishness the new black, thought back to Hank and Ronnie, nonagenarian guests I met at a motel in Florida. They were both about 5-feet short and spry. On the day we talked, they were being interviewed by a local magazine to celebrate their 72nd wedding anniversary.

“It’s really only 36 years,“ Ronnie offered because I only listen to him half the time.”

At that point Hank comes over to our spot by the pool, a violin on his shoulder, and he plays “Blue Skies.” Ronnie stops doing handstands in the pool to warn us to “be safe and stay out of the way of the dropped notes.”

“Watch it,” says Hank to Ronnie, “the anniversary is next week. We may not make it.”

Then, completely un-coached, they asked us “How long have you two been together, “applauding when we said “34 years this month.”

Then Ronnie invited us back to their room the following evening for a violin concert, a little George and Gracie Allen routine and potent vodka drinks to toast to our anniversaries.

In their case, civility and class were not dead and even vaudeville was alive and kicking.

Then, only a few weeks later, we had more of our faith renewed. We reached the front door of a popular New Orleans restaurant and were told by the host, “I’ve just seated six people and I’m putting you two at the end of the eight-top with them.”
Uh-oh. Could be awkward.

We arrive at the table to greet six good-looking twenty-somethings in three heterosexual pairings.

Uh-Oh. Could be really awkward.

We make introductions, warm up to conversations about occupations and vacations, and order our classic fried chicken, red beans, and rice. Pretty soon it’s clear that beer mugs are being hoisted in honor of an impending marriage of one of the couples and recent engagement of another.

I flung caution to the wind and announced to the celebrants, “I hope you will be as happy as we have been for the past 34 years—and you’ll look back fondly at this dinner with the two old lesbians at the end of the table.”

Laughter ensued, followed by selfies and requests for the waiter to get all of us in a photo. It was fun and greatly encouraging on the class and anti-boorishness front.

Then again, I just saw The Donald on TV telling us how smart he is, denigrating immigrants, and revving up his disciples to go forth and hate anybody who isn’t exactly like them.

It won’t be easy to get these worms back into the can.