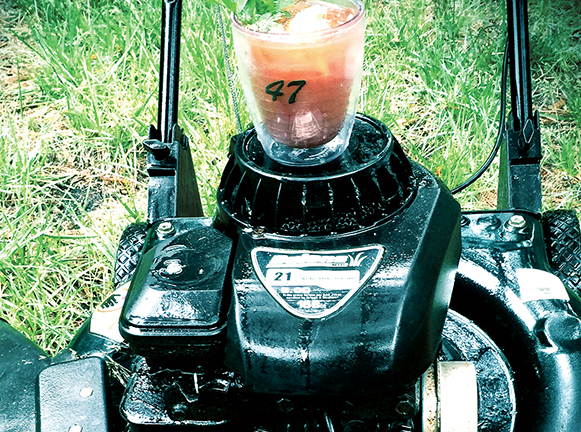 Last month, I mowed the lawn.

And I did so wearing seersucker shorts and an old pair of camo print Crocs. Of course, I was sipping a Bloody Mary and enjoying the sunshine, rushing the season on one of those glorious early spring days when you want to get out and take your shirt off and get your hands dirty.

You must understand I don’t yearn for a verdant lawn. I didn’t grow up in the suburbs and I don’t believe a tidy lawn is next to godliness. I like dandelions.

For decades, though, I’ve avoided lawn mowing because of my allergies. Once as a teenager I cut the grass and ended up at the emergency room with hives all over my extremities and conjunctivitis so bad I could barely see.

But now that I finally have my allergies under control, I am free to explore this great American pastime. Of course, it got me thinking about how we as a nation ever became so obsessed with the pursuit of a lush lawn.

It’s an interesting story. European aristocrats first planted lawns. They were cut and trimmed by hand. Prominent Americans followed suit. George Washington had a rolling lawn at Mount Vernon. Thomas Jefferson planted one at Monticello. And while Jefferson had strong views on democracy, the democratization of the lawn was not his thing.

Most cultural historians point not to Jefferson’s influence, but to a variety of circumstances beginning in the late 19th century, including the increasing popularity of a sport called golf and the rise of public parks with their landscaped lawns, trees, and water features. In fact, it is Frederick Law Olmsted, the brilliant landscape architect who created great parks such as Central Park and the Capitol Grounds, who is regarded as the father of the front lawn.

Olmsted designed some of the first American suburbs starting in the 1880s. His neighborhood plans called for each house to be set back 30’ from the road. And, he prohibited walls. His bucolic vision of neighborhoods with lawns and trees was supposed to make homeowners feel as if they were living in a park.

Fast forward to the 1950s: America needed inexpensive housing for soldiers returning from the war and their young growing families. An East Coast developer named Arthur Levitt provided just that. His cookie-cutter houses came with lawns already in place and his developments with strict requirements to keep them well manicured. Add to this the invention of the rotary lawnmower, new scientific advances in grass seed, fertilizers, and herbicides, a growing number of healthy retirees with time on their hands, and a conservative society focused on “moral fitness.” Vroom! America was off and mowing.

Today, the lawn and landscaping industry has annual revenues of around $76 billion. A 2015 Harris poll revealed 80% of Americans think having a yard is important and 90% of those with a yard think it’s important to maintain it well.

While I don’t see myself reflected within those numbers, I have enjoyed mowing the lawn these past few weeks. It provides instant gratification, which is something my 9-5 office job in Washington most certainly does not. A fresh cut lawn looks good. But, mostly I like how it smells. Nothing says summer to me like eau de fresh cut grass. Throw in a whiff of gasoline too, and I’m a happy fella.

I’m not the only one. A neuroscientist at the University of Queensland in Australia wondered why men seemed to feel so relaxed after mowing the lawn. He did a study and found the chemicals released by a freshly mowed lawn impacts the region of the brain responsible for making you feel happy.

You know what else makes you feel happy while mowing the yard? A drink. While I haven’t been able to find any scientific studies on which libation goes best with mowing, I have done my own “research.”

Here’s what I’ve learned. A Bloody Mary is perfectly acceptable if you’re mowing before noon. None of your neighbors will bat an eye. Any time after lunch is Miller Time. In my opinion, a classic American lager goes best with sweat and grass. Make sure its in a can, though, and real cold. You don’t want to risk inadvertently running over a bottle with your mower.

Late afternoon mowing, on the other hand, calls for a cocktail. Gin and tonic is refreshing, and is a nod to the lawn’s English heritage. But just know you will see every grass clipping or insect that finds its way into your drink. Personally, I’d rather not know, which is why I opt for a classic rum and Coke. I tried bourbon and coke, but it felt too autumnal, if you know what I mean. And if you’re wondering about wine, don’t. It’s entirely inappropriate.

In closing, I must admit I’ve come to appreciate mowing the lawn. While I doubt I’ll ever become one of those men who lust for a lush lawn, I can easily picture myself as a lush lawn mower. Cheers.