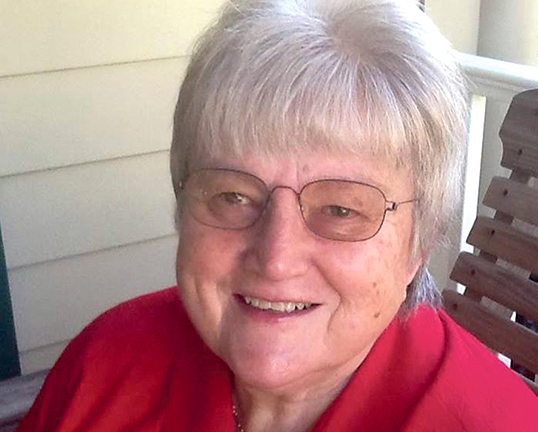 I was reminded of the phrase, “For many are called, but few are chosen,” from Matthew 22:14, King James Version. This doesn’t mean that God calls a lot of people, picks over them, and keeps only a few. It means that God calls everyone and gives them the power to respond. Talking to Susan Morrison brings this home.

Susan was born in Dunkirk, New York. After her father completed his doctorate at Cornell, the family moved to Delaware, ultimately settling in Wilmington. Her father had been recruited by DuPont as a writer for the Better Living magazine. His job was to write executive speeches, and to enhance DuPont’s public relations. In those days, we thought only of the expression, “Better things for better living, through chemistry” when thinking of the DuPont Company.

After Susan’s sister entered Junior High, their mother went back to teaching Latin. Her mother possessed a revolutionary spirit about Latin; she vehemently projected it as the fundamental basis for our language, literature, and culture. Her emphasis on mythology would have a lasting impact on Susan.

Susan attended the local elementary and middle schools, and Alexis I. DuPont High School. She graduated high school in 1961, and it is noted that she was an outstanding athlete. Although Susan was not raised with special religiosity, she kept having thoughts about becoming a missionary. This led to her choice of Drew University in Madison, New Jersey. Drew was a small liberal arts college that had been founded in 1867 by financier and railroad tycoon Daniel Drew as a theological seminary to train candidates for ministry in the Methodist Church. In college, Susan began to feel a more insistent call, and she affiliated more actively in the Campus Ministry.

Susan experienced a growing connection with the wider world. In 1965, she went to London for a semester and, when returning home, went to the Selma-Montgomery marches. Upon graduation, she applied for a position on a Methodist Missionary Team in Brazil. She was accepted with one proviso. She had not been baptized; this was corrected quickly and she went off to Rio de Janeiro for nearly four years. She immersed herself into the culture focusing on health, literacy, and community organization. Additionally, she learned the Samba.

Susan was ordained as one of the first woman deacons in the Peninsula Conference by Bishop John Wesley Lord. She served pastorates at Marvin Memorial United Methodist Church in Silver Spring, Maryland, and Emmanuel United Methodist Church in Beltsville, Maryland. In 1980, she was appointed by Bishop Mathews as Superintendent of the Baltimore Northwest District, during which time she served for one year as Dean of the Cabinet. In 1986, she was appointed Council Director of the Baltimore Washington Annual Conference. She served as chair of the committee that developed the current Book of Worship of the UMC. At the 1988 Northeastern Jurisdictional Conference of 1988, Susan was elected Bishop, one of only four women in the Methodist Church. She was assigned to the Philadelphia Area, which included Puerto Rico, where she served for eight years. In 1996, she was assigned to the Albany Area, serving there until her retirement in 2006. She was widely known as the Bishop with the little red convertible and more moxie than previously seen. She managed to get herself arrested in May, 2000 for participating in a rally protesting the Church’s policies on homosexuality. In 2005, she survived a complaint for speaking out for inclusion. Her life in the ministry was far from placid.

Asked who inspired her, she considers and settles on The Rev. James Sessions, the chaplain at Drew University. Rev. Sessions was a leader and an early Civil Rights worker. She remembers his answer to the question of inclusivity, “There is no exclusivity; everyone is in.”

In 1986, Susan and two other clergywomen bought a pied-à-terre in the Schoolvue section of Rehoboth Beach from an Episcopal Priest, The Rev. Mr. William D. Gross. Why here? Susan says that Rehoboth was having a sewer moratorium and this was a very modest cottage. She emphasizes that most of all, it was affordable. The intent was a getaway place that could accommodate hordes of families. And indeed it was. Susan moved here full time in 2006.

What do you want to be your legacy? “I hope to be remembered as someone who lived well and faithfully and struggled to make the world more gentle and tolerant. I have done battle against anger and intolerance but hopefully have encouraged others to see the essential goodness in other people.”