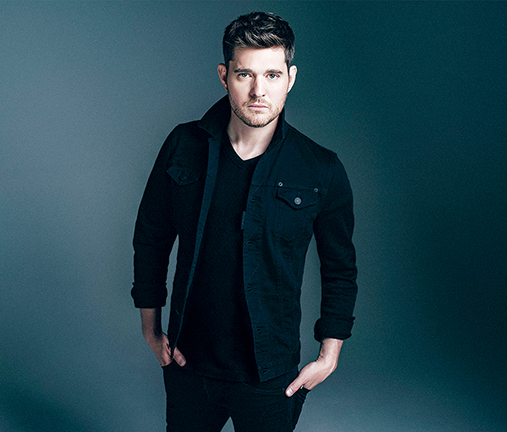 “You know what I’ll be Googling tonight: Bublé, gay, queer, all that stuff,” says Michael Bublé one recent afternoon, after being informed that said search terms render colorful results.

All you lovers, though, needn’t search beyond the dreamy crooner’s recently released album, Nobody But Me, and its 10 feel-good tunes, including several new originals and reimagined classics gleaned from the Great American Songbook.

Love, naturally, is featured prominently on Bublé’s ninth studio album, as well as in our recent chat, during which the affable ally spoke about the “joy” the LGBT community has brought him and the importance of standing up for queer issues. And no, not solely because he’s a staunch LGBT-rights advocate—when his kids grow up and read this interview, he says it’s important to him that they feel “proud.”

In 2010, you performed on a stage you deemed “phallic” because it resembled a penis. Then, a gay man threw you his keys, and you were not shy about bending over and picking them up.

(Laughs) I remember! That was a guy named Paul O’Grady, and he’s very famous in the UK. He does an act where he dresses up as a woman, who is also very famous, almost like Dame Edna. He’s a sweetie pie. I was so happy that he did that that night because it just gave me so much.

How would you describe the affection for you from the gay community?

The truth is, I don’t think I could’ve given them as much joy as they’ve given me. I’m in a business where, as you can imagine, I’m surrounded by the gay community. I mean, that’s just my life. I’m an artist, and so I’m surrounded by other artists. And everyone from my hair stylist who lives with me on the road to (my stylist) Jeff Kim, who puts me in my suits every day—I mean, god, the question isn’t who’s gay? The question is, who isn’t? (Laughs) And by the way, the ones that seem the most macho, they’re probably gay.

Talk about how your wife, Luisana Lopilato, thought you were gay when she first met you.

(Laughs) Yes, she walked in this room with a man, and the man was so good lookin’ that he made Brad Pitt look dumpy, so I assumed they were together. I naturally assumed that this was her boyfriend or her husband, so I refused to hit on her. And listen, it didn’t help that she didn’t speak English either at the time. Not a word. But the more I drank that night, the more brazen I got about trying to find out what the situation was between them. Finally, after two hours—and I don’t know how many shots and glasses of whiskey—I finally said, (effects a drunk slur) “You guys are such a beautiful couple,” and he said, “We’re not together.” He said, “She came because she likes you.” And at the same time, she was on the phone texting her mom saying, “Oh my god, Michael Bublé is all over my friend. He’s so gay.”

You recently donated items that were auctioned off to benefit the Stonewall National Monument.

To be honest, I’m doing more because of (my publicist) Liz Rosenberg. There’s something I have in the works. There’s the Harvey Milk High School that she was talking about here in New York, and I want to help there too. Listen, I love being able to spout words, but sometimes you gotta put your money where your mouth is. (Liz) said, “Should I call your manager to find out if he thinks it’s OK?” So she called my manager and my manager said, “Why are you asking me? Of course!”

How long before the pic of you suggestively eating corn on the cob did you become aware of your gay following?

(Laughs) I think it was hours.

Hours! You know, that day I took my godson, my best friend, and his wife to Disneyland, and I was looking after him because he’s a little guy. He’s four years old and he had this corn, and butter was everywhere. So, I was trying to help him with napkins, and then I grab mine and it was dripping…and my first thought was…oh god, you know what I mean. It was just the worst timing ever. The truth is, I had fun with it. There are so many terrible things you could do to land in the press or go viral with, and if that’s the worst thing, then you know what, I just gotta laugh at myself.

Seriously: When did you know you had a gay following?

Listen, I’m not Madonna. I don’t look out and see thousands of gay couples out at the shows, but even at the start, man, when I played the Blue Note (a jazz club in Greenwich Village, New York City). I’ll tell you the honest truth: I played the Blue Note 16 years ago, and the other night I had a show there, and I’m still close with one of the first fans I ever had in America. Forget about the world. In America. And his name is Johnny Blue Note, and he’s about 6-foot-5, a New Yorker with a huge personality, and he’s beautiful. I got sentimental the other night. I did a big radio show to open up the record, and I looked into this little, intimate club, and there was Johnny Blue Note. And I got sentimental. I talked about (him) during the show.

If a gay couple asked you to sing any songs off this new album at their wedding, which would you sing and why?

Aww. I think maybe “The Very Thought of You.” And to be honest with you, man: I don’t care if it’s a gay or a straight or a black or a poor wedding—love is love. And I think that would be a really beautiful, romantic first dance.

In the past, you’ve man-crushed on Blake Shelton and One Direction’s Niall Horan. Who’s your current man-crush?

That’s a good question. God, you wanna hear who I’m man-crushing on? There’s a couple of them. My No. 1 man crush is probably John Oliver (host of HBO’s Last Week Tonight with John Oliver). The other is (The Daily Show host) Trevor Noah. Goddamn—what a stunning South-African man. You know what I love man? I love that they’re self-deprecating and funny, and I know they’re empathetic because their point of view tells me that. Obviously, they’re liberal, progressive, self-confident; they have a great sense of humor. I just love that. (American astrophysicist) Neil deGrasse Tyson too. And god, the late (Anglo-American author and essayist) Christopher Hitchens. If you can man crush on a dead guy, I am man-crushin’ on a dead guy. (Linguist and philosopher) Noam Chomsky, I love. I’m trying to think of people I spend most of my evenings with, because this is who I spend most of my evenings with. Oh, Lawrence Krauss, the greatest astrophysicist. Honestly, their intelligence and skill at orating just…I mean, I’m wet.

Is it true that your Uncle Frank and Uncle Mike, who have been together for over 40 years, taught you acceptance and open-mindedness?

With or without them, the truth is, my father and my mother were so progressive, and I’m so lucky that my father just made it very simple. He just said, “It’s nature. A man can love a man and a woman can love a woman, and this doesn’t just happen with human beings—it’s science. It happens in nature. It happens with almost every animal.” Having two boys of my own who I love more than I’ll ever love myself, I can’t tell you how crushing it would be if they couldn’t feel that they could tell their father that they were gay—or different in any way. To me, (because of them), it just became a much bigger issue.

If one of your sons were to come out to you, how might you respond?

With nothing but love. And I’m not saying that to you because it’s you or the magazine. It’s because I love them, man. I love them so much that I just want them to be happy. My goal in life is to make them beautiful, happy human beings, and if that’s who they are—because I’m killed, just devastated, when I hear people saying they “choose.” “Choose”? You don’t choose. It isn’t a choice. It is genetic.

And I understand some people have an issue with the whole marriage thing and the sanctity of this word “marriage.” I mean, I don’t get it, but I can choose to listen to their point and hear it. I don’t agree with it. I always joke, everyone jokes: Why can’t gay people be just as miserable as straight people who are married? But listen to me, we are in a world—a dangerous world—right now, and if you’re not standing up against intolerance, then you’re for it. God, I sounded like George W.  Bush right there, holy shit. “If you’re not with us, you’re against us!”

There are a lot of people, and time does this, who are going to be severely embarrassed for their bias and intolerance. And they’re going to have to live with that; that’s going to be their legacy. I refuse to have that as part of my legacy.

Chris Azzopardi is the editor of Q Syndicate, the international LGBT wire service. He can proudly say Mariah Carey once called him a “daaahhhling.” Reach him via his website at chris-azzopardi.com and on Twitter (@chrisazzopardi).