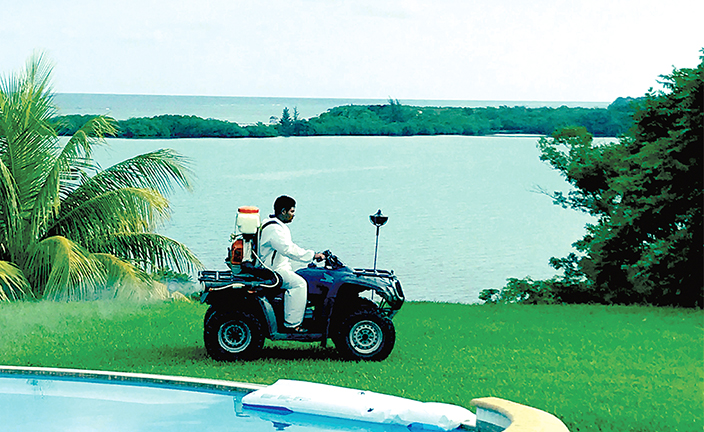 What Could Go Wrong?

I’m writing this column from an island off the coast of Honduras. Believe me, it’s the last thing I thought I’d be doing when my youngest brother convinced my partner Michael and me to join him and his wife and son and another couple on a Roatan Island vacation in order to get away from the presidential election frenzy.

Roatan is a 33-mile long island off the coast of Honduras. You might not have heard of it yet, but it’s one of Central America’s up and coming eco-tourist destinations, especially for scuba and snorkeling. Some are calling it the new St. Johns and celebrities like Michael Douglas are buying homes in this off-the-beaten-path destination. It’s even been featured on HGTV’s Caribbean Life program. It’d be sunny and cheap, my brother said, with direct flights from Miami.

We took the bait. What could go wrong?

Well, for starters it’s on the CDC warning lists for Zika, Malaria, Hepatitis A, and Typhoid. Baby brother didn’t mention we’d need shots and pills. Nor did he draw our attention to State Department warnings about high levels of kidnapping, crime, and murder. Criminals in Honduras operate with a high degree of impunity!

That’s not all. Honduras, I soon learned after arrival, is one of the poorest nations in the Western Hemisphere. And when I say poor I mean poor. Dirty barefoot boys and pregnant yellow dogs roamed everywhere. Wooden houses perched precariously on rickety stilts above mud flats. Brown water poured from rusty pipes into open sewers. Old women operated sad little fruit stands along the one potholed road bisecting the island while men in dark sunglasses with guns stood guard at banks and at the gates to private compounds, including our lovely 5-bedroom gated with a pool overlooking the Caribbean Sea on the lush, less populated eastern side of the island. “Vista Verde” also came with an attractive and talented cook, a driver, maid service, and a groundskeeper who sprayed daily for mosquitoes. Kayaks for use were available on the private beach.

I’ve never done this type of traveling and truth be told, I found it a bit unsettling given that the per capita income in Honduras is about $5,000 per year. It’s the original “banana republic.” Still, what could go wrong?

The first few days on the island were pleasantly devoid of politics. Everyone it seemed was burned out by the election process. We focused instead on sunning, drinking by the pool, reading, and supping on wonderful Honduran-style food.

On election night, we all settled down in front of the television and tuned in to CNN’s Jon King and his magic electoral map. I was in the kitchen freshening up my cocktail when the first state to be called—Indiana—went for Trump. I swore I heard a whoop, but it could have been a groan. Then Kentucky fell. This time the whoop was loud and clear.

What could go wrong? How about being trapped in the middle of a nest of Trump supporters on an island with no way off?

Never in my life would I have imagined it. This was a college-educated, well-to-do group. Yes, they were from North Carolina, but from Mecklenburg County, the most progressive in the state. I am reminded it was a state Obama won in 2008. None of them had problems with gays or gay marriage. All were opposed to that homophobic NC Bill 2.

And you know the worse part? They were a reasonable lot, not at all like the basket of deplorables on TV Trump rallies. They expressed dismay at Trump’s rhetoric. My brother even said he was nuts, the lesser of two evils. Yet he still voted for him. This was the silent Trump vote we’d heard was out there. Let me tell you, it was more frightening than the Zika virus. I filled my glass with straight vodka and settled in for what turned out to be a very dark and stormy night.

The very next day, though, it was as if the most contentious election in modern history hadn’t happened. Good game, they said, like we’d been watching a game between the Redskins and the Panthers. Hillary gave her concession speech and we all went snorkeling. Nobody wanted to talk about it—including me—and therein lies a problem.

We hear about the power of social media. It helped propel Obama to the Presidency in 2008. We saw the power of Twitter for Trump. Yet posting stories via Facebook to one’s network of friends or donating money in response to alarming email solicitations isn’t going to change someone’s mind. We’re preaching to the choir and not stepping out of our comfort zones mainly because it’s quick and convenient not to do so. There’s enough strife in the world—who wants it in their personal life? I get it. In retrospect, I never had a conversation with either of my brothers about the election, a long, drawn out event that was front and center in my life—everyone’s lives—for over a year.

It’s easy to feel disgusted by Donald Trump and his supporters. But it’s just as important to remember we all share this country and we still have to live with one another no matter how different we are. As President Obama said, “Let’s stay engaged, but push ourselves to do even better.” For me that means more authentic conversations about real issues that matter with my brothers and others like him. Would it have mattered? I don’t know. Without it, though, I definitely know what can go wrong.

Rich Barnett is the author of The Discreet Charms of a Bourgeois Beach Town, and Fun with Dick and James.More from Rich Barnett