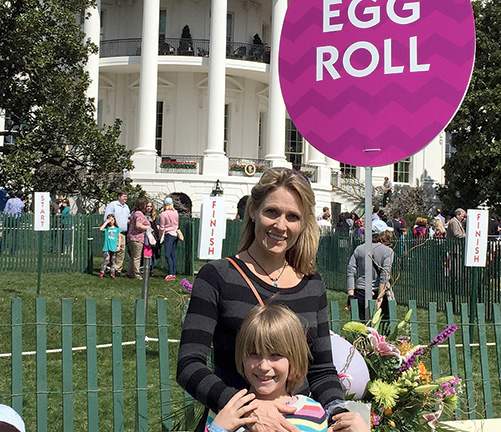 Cesar Chavez, an American farm worker, labor leader, and civil rights activist, once said, “I became a vegetarian after realizing that animals feel afraid, cold, hungry, and unhappy like we do. It was my dog Boycott who led me to question the right of humans to eat other sentient beings.” This thinking is at the root of Tara Sheldon’s philosophy of life.

Born and raised in Silver Spring, Maryland, Tara, matter-of-factly, chronicles her upbringing. She describes her neighborhood as stable and diverse. She started playing soccer in the fourth grade and the team stuck together with the same coach through high school. By her own admission, soccer took priority; the team traveled to England, Germany, Belgium, and Iceland to play.

Coming from an artistic family, she is asked about her own creations. Self-deprecatingly, Tara says that her mother and sister are the artists. Her mother, an accomplished artist, introduced Tara to Henri Matisse and The Cut-Outs. During the last decade of his life Henri Matisse deployed two simple materials—white paper and gouache—to create works of wide-ranging color and complexity. An unorthodox implement, a pair of scissors, was the tool Matisse used to transform paint and paper into a world of plants, animals, figures, and shapes. Tara was bowled over by this then and now.

Tara chose St. Mary’s College of Maryland, an undergraduate liberal arts college in the Chesapeake Bay region. She wanted high academic standards, a challenging curriculum, small classes, a sense of community, a spirit of intellectual inquiry, and soccer. But St. Mary’s proved too small and too remote. The University of Maryland became the transfer choice. Always fascinated by human behavior, Tara selected Psychology and Women’s Studies as her area of study.

It was at the University of Maryland that Tara was introduced to Minnie Bruce Pratt, a giant in feminist and gender studies. Pratt expanded the boundaries of gender and its theory. She explored the inconsistencies, the infinities, the fluidity of sex and gender. She encouraged her students to ask intriguing questions: How many ways are there to be girl, boy, man, woman? Is there a connection between feminine, masculine, lesbian, heterosexual, between desire and liberation? How many ways can the body’s sex vary—by chromosomes, hormones, genitals? Eyes-wide, Tara relates how Pratt changed her life with concepts up to now never spoken. Even today, her thinking is influenced and inspired by Pratt.

Moving to Baltimore following graduation, she began her career in community organization. She discovered an aptitude for community-shared self-interest and money-raising.  Whitman-Walker Health, founded in 1973, to promote and treat illnesses in the LGBT community, and SMYAL (Sexual Minority Youth Assistance League) were beneficiaries of her efforts. Shortly thereafter, the University of Maryland School Of Social Work was incorporated into her routine. Tara's internship for her MSW was with Lesbian Services at Whitman-Walker. Following that, she became intrigued with Feng Shui, a Chinese philosophical system of harmonizing with the surrounding environment. The goal of Feng Shui is to situate the human-built environment on spots with good qi. Tara found that blending of Feng Shui and social work produced an effective therapy for work with clients struggling with hoarding and disorganization.

Tara moved to Norfolk, Virginia. Founded in 1619, Norfolk has a long and varied history and is home to the largest naval base in the world. Intrigued by the diversity and vibrancy, Tara resumed her practice and worked on the struggling Front Porch Art Walk. Then it was time to have a baby. Emerson was born, and in 2009 they moved to Rehoboth.

Tara and Emerson settled into the community with vigor. Tara went to work as a social worker at Compassionate Care Hospice and Emerson went to day care, then Montessori, then to Rehoboth Elementary. Tara has been a vegetarian since junior high school and was raising Em to be the same. She laughs at how the pediatricians were astonished at Em’s growth rate and vibrancy on a vegetarian diet. She helped organize Veg-Rehoboth, a non-profit social, outreach organization that promotes healthy, sustainable, and compassionate eating! It has grown to nearly 500 members and Tara is now the president.

Emerson has grown into a dynamic, bright, athletic, and verbal youngster who is gender non-conforming. This has opened their worlds in a myriad of ways. Emerson was bullied for wearing pink and purple clothing and playing with girls. Unable to ignore the bullying at school, Tara and other mothers asked district officials to read a book, Jacob’s New Dress to the first-grade class. Tara went on the Susan Monday radio show to raise consciousness about the problem.

Tara credits PFLAG with giving her the support she needs to carry on the Bullying Project. She encourages us all to see the film, Bully. When asked what she hopes her legacy will be, she hopes that she will be remembered for trying ceaselessly to make the world a more compassionate and caring place.