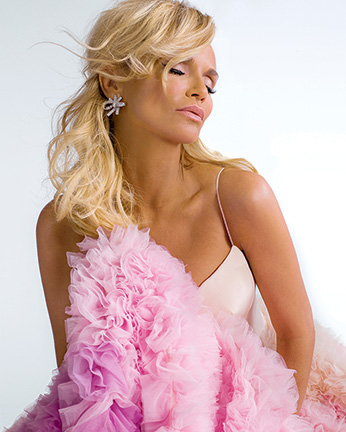 Changed for the Better

Kristin Chenoweth on LGBT love during her “nobody” years, dismissing homophobes and the Christian man she saved.

Before celebrated soprano Kristin Chenoweth morphed into a mélange of nice and naughty personalities both on stage and screen, from Glinda in Wicked in 2003 to her forthcoming role as Velma Von Tussle in NBC’s Hairspray Live!, the Broadway icon was a “nobody.”

Except, she notes, to the gay community.

Our bond with Chenoweth is for good, as demonstrated on a recent afternoon, the same day as the release of her sixth studio album, The Art of Elegance. Then, the 48-year-old rang to look back at the unexpected exchange that established her place within the LGBT community, along with an unforgettable moment in her career that “really affected me”— when a gay Christian man revealed to her that she saved his life.

Happy release day, Kristin! Where are you in the world right now?

I am in terrible traffic in New York trying to get to Morristown, New Jersey for my show tonight.

Are you gonna make it?

Well, I’m supposed to do a live Facebook feed at 5:30, so we might be pushing it a little. But it’s OK. I’ll get there some way or another. The Facebook feed might be from the car!

I’ll do my warmups from the car, exactly.

You and your Wicked co-star, Idina Menzel, both have solo albums being released today. Why have we not heard another duet with you two since Wicked?

Me too! I’m surprised too. I think it’s just timing and scheduling, and what would we do? We’d probably want to make it really cool and different and original. But I don’t know. I think it’d be something we could write ourselves, maybe. That’d be cool.

What goes through your mind on album release day?

You just have to release it and just go, “That’s my creation and I hope you like it!” (Laughs) You know, it’s a lot of pressure, actually. But then once it’s out, it’s not, because then it’s just… what it is. And that’s a lot of relief.

So aside from the traffic right now, you’re feeling relief?

How can a gay man like myself achieve elegance if he can’t sing?

So, you’ve been employing a good portion of the gay community since the beginning of your career?

(Laughs) I can’t imagine that that would not be true! Yes. That is true! That is very true. And it’s just a bond I have. I can’t explain it. I just can’t.

For your upcoming return to Broadway in November, what’s it like to know that your out costume designer and Project Runway winner, Christian Siriano, also designed for Michelle Obama?

I am a smart girl; I know everyone who he designs for. I am lucky that he said yes!

What’s the most memorable conversation you’ve had with a gay fan?

The second record I made was a Christian record (2005’s As I Am). So, I was doing one of those talks—one of those moderated talks. After it was over I did a meet and greet, and I was signing the album and a guy comes up to me—he was probably about 35 and he was so cute and kind—and he just said, “I want to thank you for helping me. Just recently you helped save my life.” And I was like, “Wait, whoa, what?” And he just said, “My whole life I’ve been told I was going to hell. And I’m gay and I love God and I’m Christian and I was able to show my family that, ‘Look at this girl. She made this album and she thinks I’m OK.’” That was 10, 12 years ago. That really affected me and stayed with me. One I really remember.

Do you think about these powerful exchanges when you’re making music?

Yeah, I do. I think about lots of kids who are persecuted by their very own families for who they are or what they believe or even what they want to do with their life. That’s really—that’s harsh. My parents weren’t that way. I have such deep compassion for anyone who feels like they’ve been ostracized by their own family.

When in your professional career did you know the gay community loved you back?

Oh gosh. The first time I felt it I was doing a show on Broadway called Steel Pier (in 1997), and it was not a hit. But it was a big, splashy Broadway musical, and I had a pretty incredibly difficult aria to sing in that show. I remember leaving the show one night. I was a nobody. I was just starting. And there was a group waiting for me. I figured they were waiting for Karen Ziemba or Debra Monk, and all of a sudden they were like, “Kristin, Kristin!” and I turned over and there’s this fabulous group standing there and they go, “Will you sign our program?” And I said, “Me? Are you sure? Really?” (Laughs) They said, “Yeah. You! You’re incredible. Your voice, your voice! And you’re not lip syncing—that’s fabulous!”

So I was signing the program and this one guy reached over and grabbed my hand and said, “Us gays love you!” I just remember smiling so big and feeling the power and the love and I sent it right back. I guess that’s been going on ever since. But really, ever since I was a little girl too, because I had friends who were outsiders because of their orientation. I am so thrilled at how far things have come and how far they’re coming. I just keep praying that it keeps evolving and changing and becoming more open and that people are allowed to love who they love and marry who they want to marry.

As someone who’s been a staunch supporter of LGBT issues and rights, what’s going through your mind regarding this election and whether, if elected, Donald Trump could affect the progress we’ve made in the LGBT community?

I don’t think it will affect it that much in that arena, but I worry about other arenas. I worry about world safety—our safety. When your brother is kind of running off at the mouth, you go, “OK.” But when somebody you don’t know does it, it’s scary. That’s the way I view it. Like, how will we be viewed? So, I am like the rest of the world. I am in shock.

How much flak have you received from conservative Christians because of your support of the community?

Oh, I’ve definitely lost fans. I’ve been fired from Women of Faith. The haters online and on social media are there. But I don’t know... I think I’ve gotten tougher or somethin’.

The negativity has had the opposite effect on you?

Why do you think that is?

Well, even if you believe different things, you still want to be able to have music in common. And now, I guess maybe what’s changed is, it’s OK if you don’t like my music. If you don’t like what I believe, maybe I don’t want you to.

If you have a random run-in with a gay man, what work of yours is he most likely to compliment?

So good. And GCB!

And GCB! Oh my gosh, of course. How could I leave that one out? They love that one.

There’s a song on this new album for just about every occasion. If you could dedicate any classic song from this album to your gay following, which would it be?

Just on sheer orchestration, melody and lyric and, of course, no soprano—all belt—I’m gonna go with “Skylark” because it’s complicated. It’s not easy to sing, and I feel like they’d know that and appreciate it and love it.

Your voice is surprisingly deeper on this album.

I do go deep! It’s changing!

You’re going through a late puberty?

I guess so! I’m like, when was someone gonna tell me this was gonna happen? I’ve still got the high, but my voice is dropping.

Are you comfortable with your voice changing?

Oh yeah! Because I think 10 years ago —five years ago even!—I would’ve done an even different piece and it would’ve been what you would’ve expected from me. But this necessarily isn’t. I love that.

As someone who played Glinda the Good Witch, what can people expect when you play her antithesis, Velma Von Tussle, in December in Hairspray Live!?

I’m so lucky that I haven’t been too terribly typecast! You know, I’m definitely gonna have a fabulous wig. I’m definitely gonna have fabulous makeup and costumes. I’m also going to really go there with her. I mean, she’s not necessarily lovable, but I’m gonna try to make her fun to hate. (Hairspray Live! composer) Marc Shaiman has been working with me a little bit to make the song “Miss Baltimore Crabs” a little more my own. More crazy high notes, some low ones too. Physically, a lot of fun stuff.

How do you like playing someone with opposite morals and values?

You’ve collaborated with many people throughout your career. What comes to mind when you think of the following? First, obviously: Idina Menzel.

We made magic together.

She’s not into the idea of having other actresses take your parts in a Wicked film. How do you feel about it?

And Jennifer Lopez, whose BFF you played in 2015’s The Boy Next Door.

She wants the best for me. Loyal. Real. A friend. And fun to work with! We laughed all the time. Ahh, I love her. And that movie—it’s a guilty pleasure.

I have a feeling the gay community might have found it more pleasurable than the general public.

I think so! And I’m fine with that.

Beautiful, best spirit, supportive, protective. He wants to be great so he works hard. Nothing but respect there.

And you worked with Betty White when you guest starred on an episode of Hot in Cleveland—what stands out to you about her?

Chris Azzopardi is the editor of Q Syndicate, the international LGBT wire service. He once made Jane Fonda cry. Reach him via his website at chris-azzopardi.com and on Twitter (@chrisazzopardi). Contact Chris Azzopardi.