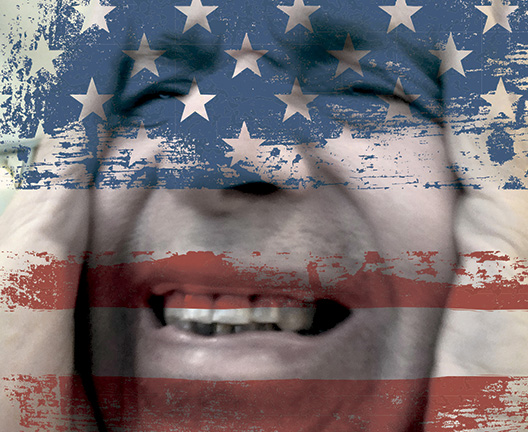 I did a search for “election stress.” Actually, that’s what I intended to type, but Google, in that prescient way it has, divined what was on my mind by the time I typed “el,” leading me to surmise that I was far from the only one out there feeling anxious about the election.

It even has a name: Election Stress Disorder. Or ESD for short!

A quick glance down the page revealed a wide assortment of article titles including: You Might Need Actual Therapy Because Of This Crazy Election; Can This Please Be Over Soon? Election Stress Is Real; How This Lesbian Mom Stays (Mostly) Sane During Election Season; and Suffering from Election Stress Disorder. That last one, by the way, was written by Kate Clinton in the September 28 edition of the Washington Blade.

Back in April of this year, Steven Stosny, Ph.D., wrote an article for Psychology Today titled Do You Suffer From Election Stress Disorder? In that article he comments that his workload greatly increases during national elections because so many couples are suffering from resentment, anger, or emotional abuse. “Many people download the negativity of their environment and take it out on the closest people to them.” He says. “A web of emotion connects us all, and did so long before the Internet became its national conduit. Political campaigns set the web of emotion ablaze with negativity.”

We thought it was bad in April; how do we make it to November?

Stosny prefaces his column by contrasting the Adult brain and the Toddler brain “(emotional, all-or-nothing, ‘mine! No!)’” He says that, “staying in the Adult brain consistently is hard enough during non-election years. Under stress, the Toddler brain hijacks the Adult brain, impairing its ability to take other perspectives, weigh evidence, see nuance, plan for the future, and create value and meaning. The Toddler brain is highly susceptible to emotional contagion; toddlers take on whatever negative emotions are around them, as any parent who has been tense or irritable near one can attest.”

Keeping our minds working like adults takes more conscious effort than surrendering to that internal toddler, and so it makes sense to me that during this intensely negative and emotional political campaign it takes more energy to keep ourselves in balance. Certainly, we should expect leadership at all levels to do the same—and to remain steady, thoughtful, and inspiring.

Having spent the last 25 years in leadership of an organization actively “Creating A More Positive” environment for LGBTQ people in Delaware, I have witnessed the power of positive thinking in action. I’ve also come to understand that a leader must fully embrace the guiding vision of his or her organization—and even become the keeper of its dream, the storyteller, the one who sets the tone for all those involved.

The cover photo on this magazine was created as a Halloween cover, and inspired by the witches from Oz—who also become the leading roles in the Broadway musical: Wicked: The Untold Story of the Witches of Oz, adapted from the novel by Gregory Maguire of almost the same name—Wicked: The Life and Times of the Wicked Witch of the West. The most fascinating part of the Wicked storyline is how each one of the witches become the character everyone believes them to be—and how the lines between good and evil are not always easily defined.

With each election cycle throughout our lives, our technology has improved. Today we live every moment completely wrapped in a media cocoon. Sorting out truth takes examination of sources and a constant need to keep our Adult brain working in a thoughtful manner. Many of the news apps we use allow us to choose where our news comes from, but without thoughtful choices it is possible to end up in a world as fictional as that of our beloved Oz characters.

Our red state/blue state mentality is as hard edged as was our childhood belief in the differences between the good and bad witches of Oz. Yet in real life, we have much more in common with one another than our polarizing political views would have us belive.

We are a country desperately in need of “Adult brain” conversations. Compromise is not a bad word. Changing one’s mind because of reasoned debate and new information is not a sign of weakness. Everything should not be only about winning or losing—or money. Respect, dignity, manners, and simply human kindness are good things. We can disagree without threatening one another. There is value in experience and the wisdom that comes from it.

One of the challenges of running a LGBTQ organization, and something that we had to learn early on in the process, is that while we are kindred spirits in our sexuality—though even in that there are great differences among us—in all the other aspects of our lives we are as diverse as the greater population around us. Economic status, race, religion, politics: just like the rest of the world, we do not always see eye-to-eye, and yet, when we come together to solve a problem, our diversity—if we let it—gives us strength and creativity and inspiration.

From small organizations like ours to the highest seats of government, when we work for the common good and not for ourselves, we change the world around us. Idealistic? Yes. But with the weight of brutally negative politics pressing us down at every turn, and the whole country suffering from Election Stress Disorder, we need to stop and remember what it is that makes us good.

The next few weeks are not going to help my ESD, but for now, I’m going to turn off the news, defy the gravity of this election, and listen to the soundtrack of Wicked.

Happy Halloween! This might be the scariest one yet!