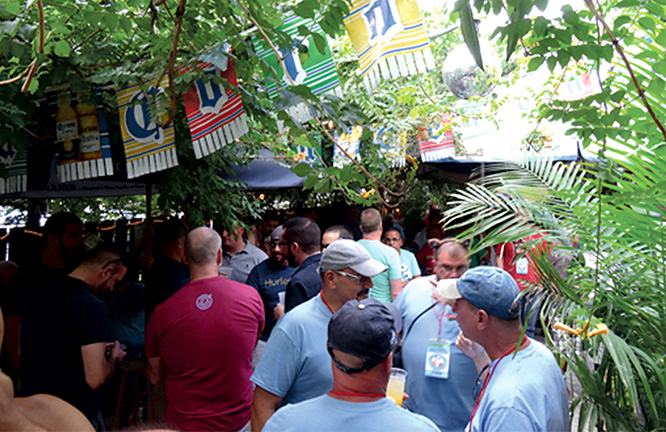 Rehoboth Beach Overrun by Bears (But In a Good Way)

News Flash! Rehoboth Beach, usually known as the “Summer Capital of the Nation,” has temporarily become the “Bear Capital of the Mid-Atlantic.” Bears have been seen on the streets, on the Boardwalk, and in the most popular restaurants and bars. Sources inform this publication that bear sightings are expected this weekend at Gordon’s Pond, Clear Space Theatre, and even in the CAMP Rehoboth Community Center. What in the world is going on?

September 15-18, 2016 marks the second annual “Rehoboth Beach Bear Weekend.” The festival is organized by the Rehoboth Beach Bears, a local nonprofit organization that nurtures a sense of community among Bears, a subset of the gay male culture that describes large, burly, often hairy men. Last year the Rehoboth Beach Bears hosted its first Bear Weekend, and nearly 200 men came for four days of fun and camaraderie. Proceeds from last year’s event were donated to three local charities: the Delaware AIDS Walk (for HIV/AIDS services), the Harry K Foundation (for programs for children), and CAMP Rehoboth (for services to the LGBT community).

So there is no need to worry! The bears invading Rehoboth Beach are going to be too busy to cause anyone much bother. “We have a full schedule of activities for our bear brothers this weekend,” explains John Lucas, who serves on the Board of Directors for the Rehoboth Beach Bears. Bears are by nature social creatures, so it is not surprising that there are plenty of opportunities for the bears to gather and have fun. The Thursday night Kick-Off Dance Party at the Atlantic Coast Grill had the men out on the dance floor and growling at each other in appreciation of some great dance moves. The partying continues on Friday night with a “Fun ‘N Fur” Dance Party in the Ballroom at the Atlantic Sands Hotel. Designated “Bear Bars” for the weekend include The Pond, Lula Brazil, the Double L, and Aqua. The festival ends with a Closing Party Sunday afternoon in the Purple Parrot Biergarten (appropriately re-named the “BEAR-garten” for this weekend).

The Bear Weekend is not just one dance party after another, however. New this year is “Build a Better Bear”, a series of three workshops being presented on Saturday morning at the CAMP Rehoboth Community Center. CAMP Rehoboth’s own Sal Seeley will share information about Pre-Exposure Prophylaxis (PrEP) as a strategy to halt the spread of HIV. Other presentations that morning include one on financial planning for retirement by Jenn Harpel (Morgan Stanley) and one on healthy eating (presented by Beebe Healthcare). Later in the day, festival participants will return to the Community Center for a Bear Art Show and Sale. And who can forget about Beach Time? When they are ready to relax on Saturday, festival participants will head to Gordon’s Pond for some sun, some fun, and some lunch.

Did we mention that shopping was on the agenda, too? A number of local businesses are offering special discounts to Bear Weekend festival-goers. Participating merchants will have a special Bear Poster in their store windows. Why not stop by and thank them for supporting the community in such a generous way? This is one time that if you growl at them, they will take it as a compliment!

“Our bears are definitely friendly bears”, explains Ken Mahan, another Bear Board member. “While some of our activities focus on bears, others appeal to lots of different kinds of people, and we would love to have them join us!” The best example of that is Saturday night’s concert performance by singer-songwriter Tom Goss. Goss is a guitar toting, power-pop prodigy with five studio albums, one live album, two EPs and multiple non-album singles under his belt. He will be doing two shows at the Clear Space Theatre on Saturday night, September 17, one at 7 and 9 p.m. His shows will include his popular hits “Bears” and “Make Believe,” along with his most recent hit song “Son of a Preacher Man” a cover song with a whole new twist and message.

The mission of the Rehoboth Beach Bears is to foster a greater sense of community. It also appreciates the support of the community in its activities, particularly the sponsors of this year’s Bear Weekend: Aqua Grill, Cybersocket.com, the Purple Parrot, the Double L Bar, The Pond Bar & Grill, Signarama, CAMP Rehoboth, the Homestead B&B, Doggies at the Beach, Double Dippers Ice Cream, The Spice & Tea Exchange, go fish!, Mariachi Restaurant, Hobos Restaurant & Bar, Snyder’s Candies, Lula Brazil, Dos Locos and the Rehoboth Ale House. Wow, that’s quite a list…we BEAR-ly had enough room to list them all!

Information about individual events can be found online at RehobothBeachBears.com. Tickets for the concert are $40 each and can be purchased at the theatre 45 minutes before each show, if tickets are available. Tickets to the concert—as well as Bear Passes for the entire weekend—can be purchased at the Bear Registration Station, just off the lobby in the Atlantic Sands Hotel on Baltimore Avenue. The Bear Registration Station is open Thursday 4-9 p.m.; Friday noon-9 p.m., and again on Saturday from 9 a.m. until noon.