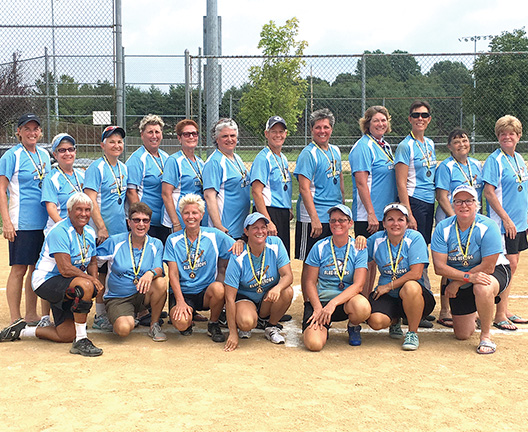 The Blue Herons, one of six teams on the Rehoboth Beach Women’s Senior Softball League, came out on top this year. It’s their first time as the victors in this decade-old league and they are celebrating not only the league win but triumph at the Delaware Senior Olympics as well.

And congratulations for a successful season to the other five teams, the Alley Cats, Beach Cleats, Delaware Diamonds, SeaGals, and Shore Sharks.

The Senior League is a fun and occasionally very competitive group of women who, on any given Tuesday night, can be found at the fields along Holland Glade Road. With the six-team league, there are generally 120 women—players, coaches, scorekeepers and fans—assembled to play competitive softball and try not to get hurt at the same time. With players between 45 and 77 years of age, it’s a challenge.

And yes, when the league first started ten years ago, there were teams like the Hot Flashes and Slamming 60s (how about the Ace Bandages??), but pretty soon it was obvious that the jokes could take a back seat to some really fabulous softball.

League Commissioner Rina Pellegrini explains that to keep the use of ice bags and heating pads to a minimum, the senior league has special rules. There are two extra- large home plates, one as a target for incoming runners and the other for the fielders to target; the slow-pitch must be delivered in a 6-12-foot arc over the plate, with an extra area behind the plate for the ball to land. Oh, and some of the catchers squat and others not so much.

There are also two first base bags for collision avoidance and only occasional slides into second. In fact, there’s a lot of pinch running and other accommodations for seniority “but you can joke all you want about it, there’s some great softball going on,” says Sharon Kanter of the Blue Herons.

“Okay,“ says Rina, “We do laugh about a pinch runner using an inhaler, but seriously, we are playing some very competitive softball.”

In fact, at the start of each season, the teams discuss their philosophy, and whether it’s playing to have fun or to win at all costs. Of course, the “fun” mode can be eclipsed by “win at all costs” when a player is rounding third and heading for home—hence the use of the double home plate to avoid serious injuries.

The league started out in 2006 as a fun way to get exercise and prep for possible team entry into the Delaware Senior Olympics. There weren’t real teams and there was no competition—it was just a practice league playing out on Route 9 at Sports at the Beach. But by 2008 or 2009, the gals formed teams to complete against each other and an exciting summer league came into existence. Two years ago the league moved to Holland Glade, where they play now.

With three games Tuesday evenings between June and the end of August, the teams have about 18 players each, play seven inning games and enjoy the camaraderie and the competition.

Sharon notes that the younger players were lucky to have been able to play high school softball after the Title IX legislation made it possible. “Some of us who are older, didn’t get to play on those teams,” she says. “We just played in rec leagues. You can see the difference—the younger players are very skilled. We didn’t get to play in high school.”

“It’s true, “says Cathy Benson, team manager and a pitcher for the Shore Sharks. “Title IX made a huge difference.”

“Softball is all we had,” says Sharon, “now the girls can play everything—we didn’t have soccer and field hockey.”
It’s great that the team members have the chance to play, then graduate to coaching positions. “We have an 82-year-old coaching first base,” Sharon says.

As the teams look forward to the off season, they want local women to know that there is room for growth in the league. “We’re always looking for new players, “ says Commish Rina. “and besides, in addition to the games, we have tailgate parties in the parking lot and post-game socializing at our sponsors’ businesses, like Jakes and Murphs.

Of course, it’s sponsors like the aforementioned restaurants, along with sponsors like Linda Bova, Signarama, the Lazy B&B, and many more that make this all possible.

And now, as league victors as well as state champs, the Blue Herons have a chance to compete next June in the national senior games in Alabama.

In the meantime, all of the league’s teams are putting this summer’s heat behind them, resting up (although some players are heading for the pickleball courts!) and gearing up for Senior Softball 2017. If you’re interested in joining, email Commissioner Rina Pellegrini.