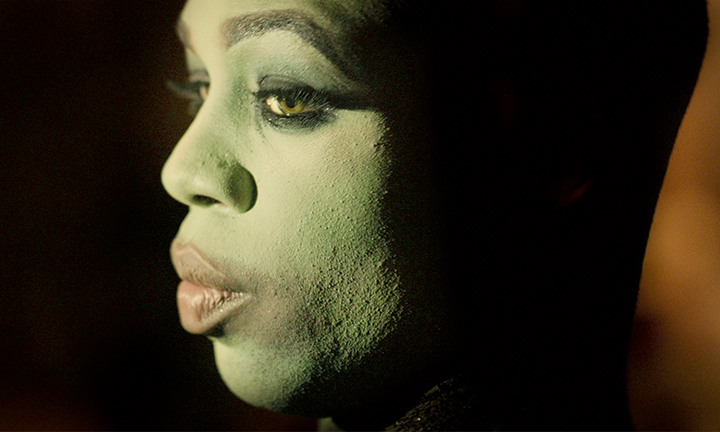 Todrick Hall grew up in Plainview, Texas, with a dream to be “one of these black women who could sing all these crazy notes.” It is, after all, in his blood —his cousin is none other than Dreamgirls song slayer Jennifer Holliday.

But first, as a child, the aspiring soul singer found life in The Little Mermaid, replicating Ariel’s crimson hair with a red towel on his head and gadgets and gizmos a-plenty. Clasping a fork, he created a makeshift fishtail by binding his feet together with a water hose. Meanwhile, to channel another shero of his, Catwoman, he got his hands on some blue tape, nails, and a jump rope, which doubled as his whip and tail.

“My backyard was my playground,” the 32-year-old singer says of his childhood, when he discovered another one of his female role models: Mariah Carey. His adoration for the biracial diva ran deep. “I think I just was more inspired to be like Mariah Carey,” he says.

In 1993, he made a revelation after seeing the “Dreamlover” music video: “I was like, ‘Oh my god.’ I had never seen anyone who appeared to be Caucasian sound like that. I was just fascinated.”

His propensity for female vocalists extended to Lauryn Hill’s singing in Sister Act 2 and Brandy in the Whitney Houston-as-the-fairy-godmother version of Cinderella, along with ’90s R&B girl-group sensation SWV. And, because he felt destined to become all these ladies, “I would practice day in and day out.”

That practice led Hall beyond his own backyard, from ballet at age nine to The Color Purple with American Idol alum Fantasia Barrino. Then, in 2009, he impressed the American Idol judges himself, nabbing a spot in the semi-finals. With vocal tributes to artists such as Rihanna, Taylor Swift and Beyoncé, his “4” series on YouTube gave his career a nice boost. (Soon, he says he’ll be honoring his childhood idol with a webisode dedicated to Mariah Carey: “I just have to be on vocal rest for, like, three weeks; her music is so hard!”)

After releasing an ambitious, 57-minute conceptual album in 2016 and replacing Billy Porter in Kinky Boots on Broadway that same year, Hall says, “I think my younger self would be really shocked (about my career now) because I didn’t have very high expectations for my life, and I’ve just gotten to do some really, really cool things I never thought I’d get to do.” 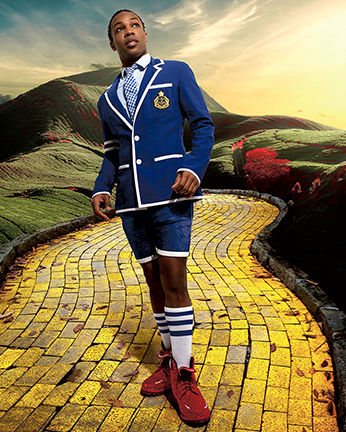 The album, called Straight Outta Oz, reflects thoughtfully and powerfully on Hall’s coming-of-age as a gay black kid in Plainview, through his rise to fame while struggling to adjust to a new life in Los Angeles. “Color” ruminates on his first boyfriend, a handsome Londoner named Garrett, “the first to really know me.” Visually, it replicates Dorothy’s own life in a new world, as yellows, blues, and greens pop into the video’s stark, black-and-white frame.

Guest stars include RuPaul’s Drag Race vets Kim Chi, Bob the Drag Queen, and Willam Belli, as well as Joseph Gordon-Levitt, Nicole Scherzinger and, as Hall’s mother, Amber Riley, who contributes the moving tearjerker “See Your Face,” about a woman yearning for her distant son. “Got a picture framed of you on stage at your very first ballet, and I know that you won’t answer,” she wrenchingly sings, “but I’ll call you twice a day, just in case today might be the day I get to see your face.”

For Hall, “I think I was honestly very naive growing up and thought I was a Disney princess my whole life,” he says, laughing. “I still kind of think I do feel that way! So, I didn’t feel super different as a child, minus the moments where my dad made me feel really weird. My mom always applauded me for wanting to do ballet. But I didn’t attach a sexual orientation to my life until much later.”

Though he grew up feeling fearless, when he moved to L.A. to pursue showbiz, “I learned how to be insecure and I learned how to doubt myself.” Ashamed of his race and sexuality, he admits, “I didn’t really believe in myself.”

“I wished I could change so I could be more successful commercially,” he recalls. “I remember being on American Idol and I couldn’t be myself. I had to talk a certain way to (host) Ryan Seacrest. I was just so nervous that people would figure out my secret.”

Even if “this is gonna sound really crazy,” during a rough patch with his mom caused by his relationship with Garrett (they’ve since reconciled), he found comfort in Nicole Richie. He says the star and her reality show, The Simple Life, were his pick-me-ups. “I just think she’s so funny and so whippety,” he says. “I literally had dreams about being friends with her. So, when I meet her one day, I’m gonna lose my mind.”

Now, “not only am I not ashamed,” he asserts, “I’m so proud to be an openly gay black man and so proud that me using my voice to tell my story can help people.” His journey through self-discovery and into empowerment is mirrored in his work, where being himself has been his greatest asset. He says he was offered the role of Lola, the lead in Kinky Boots, “without even auditioning, because they felt my story was so similar to that of Lola’s.”

“It’s opened up so many doors,” he blithely adds.

Hall’s galvanizing story is the kind that makes for movie magic, which is what filmmaker Katherine Fairfax Wright set out to create with the new documentary Behind the Curtain: Todrick Hall, currently making its film fest rounds. The documentary goes deep into the entertainer’s struggles to find his place in Hollywood as a gay black man. “There’s not a lot of roles for gay African-American men,” he says during the film. “I was like, ‘I’m gonna create my own opportunities because they don’t exist if I don’t.’” 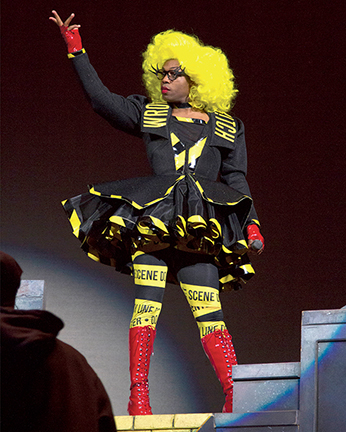 His moxie and unflappable ambition resulted in 16 videos—miraculously, all shot in two weeks—for Straight Outta Oz, its creation covered in depth during Wright’s Behind the Curtain. Post Straight Outta Oz, he began receiving calls from Broadway producers. Publishers offered him book deals. Even Taylor Swift, who came to see him in Kinky Boots, is a fan—and friend—now.

During Thanksgiving last year, Hall celebrated with Swift and her crew, and —like a full-circle dream come true—the two even sat down at a piano to sing “Part of Your World” from The Little Mermaid. “It was such an epic moment,” he recalls, gushing about how she’s the “ultimate great best friend.”

“She gives me the best advice,” he continues, “and when I watch her, it’s much like watching RuPaul—RuPaul is not only where he is because he’s a legend in his own right, he treats every single person who he works for and works with so well and that’s why he has people who’ve been around him for years.”

After guest-judging RuPaul’s Drag Race, Hall’s relationship with the drag and cultural icon has given him new aspirations: He, like RuPaul, hopes to empower people who once felt as discouraged and hopeless as him.

“Every time I sit next to RuPaul on our panel, I’m like, ‘I want to be this one day.’ When you walk into a room and people say, ‘Thank you for doing what you have done.’”

“I wanna be somebody who’s a trailblazer for our community—so a little Todrick in Texas right now can look up to me and say, ‘You know what? I can do it because Todrick did it.’”

As editor of Q Syndicate, the international LGBT wire service, Chris Azzopardi has interviewed a multitude of superstars, including Meryl Streep, Mariah Carey, and Beyoncé. Reach him via his website or on Twitter (@chrisazzopardi).