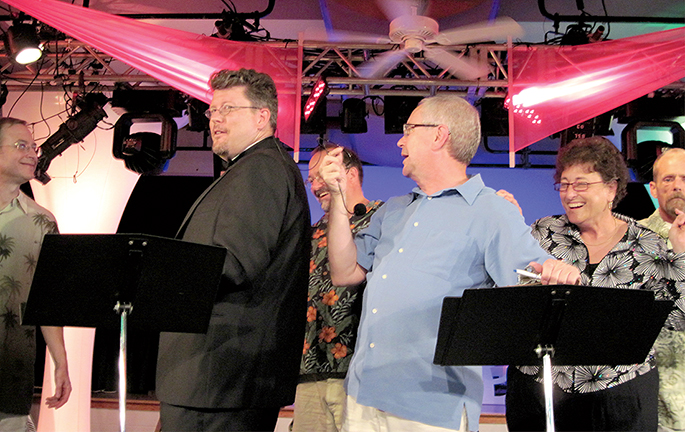 Chaos reigned onstage with the 2009 auction team of Eric Peterson, Steve Elkins, and Fay Jacobs. But we raised lots of money!

To the Rainbow and Back Again

I’ve been helping out just a little, and attending CAMP Rehoboth’s Sundance Auction every year for more than two decades. Back in the 90s and well into this century, I also braved the hugely popular dance party. To be sure, I’m not saying “never again” to hitting the dancefloor, cheering Murray Archibald’s fan dancing, and reveling in the thundering music and choreographed lights, plus décor that would make NYC and LA promoters proud.

But not this year. I’ll be out of town and miss Sundance for the first time since we cruised into town on our boat, shortly after the pilgrims landed at Plymouth Rock. 1995, as I recall.

For me, not only did working on and attending the Auction night entertain and bolster my sense of community, but it gave me some damn good stories. Many of them too fresh at the time to make Letters.

So I probably never wrote about being locked in the “writer’s room” with Steve Elkins, Glenn Pruitt, Maureen Keenan, Sondra Arkin, Eric Peterson, and so many more, all of us tasked with coming up with over six hundred pithy phrases for tags on the auction items.

Inevitably, lacking sleep, and under extreme pressure to produce, we’d get giddy, coming up with suspect descriptions like “a stunning fruit bowl for all your fruity friends,” or “candelabra fit for a Queen you may know,” or “Get your dyke on with this Black & Decker tool belt.” Mercifully, there were proofers who’d throw out those gems and demand better.

Years ago, we’d have a bit of entertainment between the end of the silent auction and the start of the live auction, giving the tabulators (Go, Natalie Moss!) time to post the winners. One year we rehearsed two guys and a gal, doing the song “We’re in the Money.” One of the guys wore white pants so stupefyingly tight, the cheers were NOT for the musical number.

Another year, we did something completely outrageous:  We had two women sing “Old Fashioned Wedding” to each other. It was shocking! Who knew that 18 years later we’d all be able to sing that song? (And hopefully keep doing so!)

One year, after we lost dear Ben Killebrew, our longtime auctioneer, and before we were lucky enough to meet professional auctioneer Lorne Crawford, Eric Peterson and I stood in as faux auctioneers. What a comedy of errors. I shouted out the item descriptions ad nauseum, and poor Eric tried the tongue twisting auction banter. “I got 100, who’ll give me 150, yibiddy, yibbity, sis boom bah.” He sprained his tonsils, I got world class laryngitis but we both got through it and happily raised a lot of money. The following year we were thrilled to be fired.

That live auction is always a blast. The bidding crowd surges to the front, while hundreds of silent auctionees go to retrieve their “winnings.” Bonnie always reminds me that I didn’t win the item, I paid for it. Harumph. Over the years my, oh what the heck, winnings included two elegant barstools, a painting or six, numerous home décor accessories, four hours of professional kitchen design help (thanks, Patty McDaniel), a snow blower (what was I thinking?), and a trip to Palm Springs.

And restaurant gift certificates by the score. I figure I’m going to pay to go out to eat anyway, why shouldn’t CAMP make the money from the restauranteurs’ generosity.

Some of my favorite live auction items from the decades include Joe Biden’s cufflinks (thanks, John Brady), Elaine Stritch’s white dress shirt, a headpiece worn by Julie Andrews in Victor/Victoria, cruises, theatre weekends, exquisite jewelry, and so much more.

As for the dance, it’s raining men and plenty of women, too. If you never got to Studio 54, you can bring it back with our non-stop music and light show at Sundance 30! I admit, in the late 90s or early millennium, I did take advantage of the wide open bar, dance until I dropped, and rode home in a taxi. Only once. Okay, maybe twice.

For readers who’ve never been to Sundance, GO! You can read all about the 2017 edition elsewhere in this magazine. It’s worth the ticket price just to see how Murray Archibald and his team transform that sad, creepy empty Rehoboth Mall into a dynamic big-city dance club. I promise you amazement, a grand time and an unforgettable experience—at the auction, the dance, or both.

For Sundance regulars, please go and bid your heart out on Saturday, dance your shoes off on Sunday.

As for me, I can’t believe I’m going to miss it for the first time in 23 years. I’m not sure I can do it. Don’t be surprised if you see me come screeching in, Bonnie and Windsor in tow, direct from a race up 95 and 301 on the Eastern Shore, just in time to get my bid number and get shopping, dining, drinking, and seeing all the people I love.

I’ll be the one wearing the Sundance 1998, Rainbow Revival T-shirt, my very favorite.