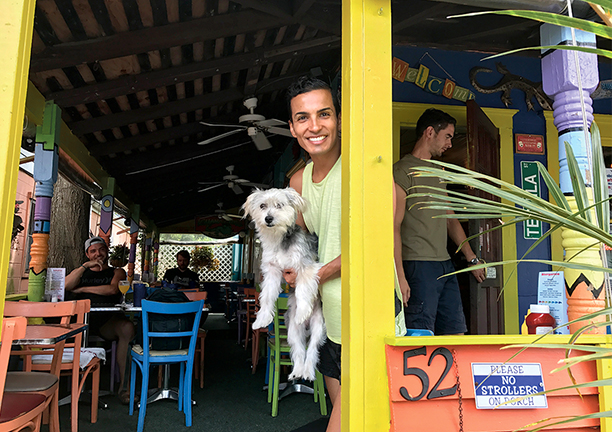 What Goes Around Comes Around at Iguana!

I first met Hugh Fuller on the porch of Iguana Grill over 20 years ago. He owned the place with his then-partner (still dear friend) Troy. Bonnie and I had laughs, margaritas, and skinny fries called Texas Toothpicks.

From that night on, we had so many good times at Iguana I cannot even come up with a favorite story. It was our place to be. Before we lived here full-time, when we arrived on Friday nights, we’d grab a seat on the porch and watch Baltimore Avenue buzz all night.

When the guys opened what proved to be the fantastically successful Purple Parrot, they kept Iguana in the family for a while, but then sold the place to Ken and Carmel Rutter. We loved Iguana then, too, for the cool breezes on the porch, the friendly owners, and the fact that they were Schnauzer owners, too. These things are important!

But now, it seems, the Rutters have retired, and Hugh is back at the helm of the Iguana Grill. And in the interim, Hugh has proven to be one of the most involved and caring business owners in our community. That he’s back owning Iguana makes me happy, bordering on giddy.

Recently, I spent time on the Iguana porch with Hugh, sampling the new menu, and chatting about old times. Lots has changed in Rehoboth over these past two decades. But luckily, not the good cheer at the re-energized Iguana Grill. That Hugh’s husband Ronal, who hails from Colombia in South America, has brought a Colombian flair to the place only adds to the Iguana’s appeal.

We sampled the crazy corn on a stick appetizer—a small roasted cob on a stick, rolled in parmesan cheese with a delicious secret sauce on top. What an amazing combination. Chicken wings are a specialty, cooked with chipoltle and brown sugar or other sauces. The wings are truly jumbo, and I intend to revisit and have them with a cold, cold beer.

We had a taste of the Chesapeake Cake Sliders—shrimp, crab, and scallops on a roll, topped with key lime and cilantro. They were served with hearty, crispy fries, dosed with Old Bay, and other ingredients Hugh declined to divulge. The sliders are quickly becoming an Iguana signature dish.

The grilled chicken quesadillas with house made flour tortillas, tomatoes, jack cheese and black beans. were also marvelous—especially paired with a Vodka Orange Crush (“Come on, Fay, it’s after noon,” said Hugh.) Full disclosure. I napped a bit before sitting down at the computer to write this article.

Among the standouts was the empanada dish, Ronal’s mom’s recipe, noted on the menu as Mamo Gloria’s Famoso Colombiano Empanadas. It’s filled with a daily special (we had chicken and tomato) and served with a lime-cilantro salsa. Deliciously moist and flavorful. We also got a bite of the plantains, served Colombian style as well—not too sweet. A great complement to any of the other dishes.

Finally, we tried the grilled and chilled ahi tuna with seaweed salad, with wasabi, and sesame sauce. It’s served as an appetizer or in tacos—fresh and rare, rare, rare, just the way I love it.

The good news is that Iguana serves breakfast daily (all American to Mexican specialties, plus a $3 Bloody Mary or Mimosa), lunch and dinner, plus Happy Hour. Stop by and visit the new Iguana Grill for a grand time on the porch, or a cool time inside at the bar. So Hugh, as we sing about Dolly Levi, it’s so good to have you back where you belong!