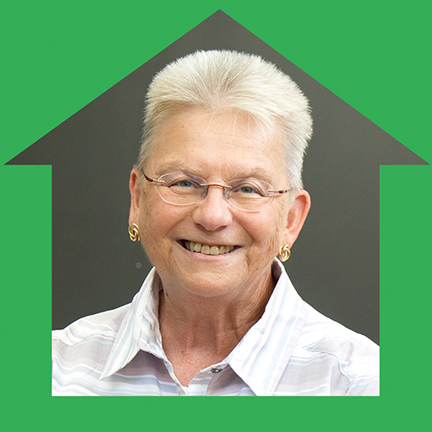 Carol Lazzara is from Bridgeport, Connecticut. She worked her way through college, getting her first Bachelor’s degree as a Physician’s Assistant in Pathology at the age of 30 from Quinnipiac College in Hamden, CT. Carol worked at Rhode Island Hospital for six years performing autopsies, doing surgical pathology, medical photography, and taught autopsy techniques to Brown University medical students. She then decided to go back to school where she received another Bachelor’s degree in Computer Science from Rhode Island College. After receiving her degree, Carol secured a job with IBM, working there for 13 years. After IBM, Carol opened her own computer-related consulting company, retiring at the age of 60.

Carol, and her wife Sheila, have been together since 1980, and were married in 2014. During their years together, they have lived in Rhode Island, Boston, Maryland, and Maine. They initially retired in Rhode Island, but were bored (usually) and cold in the winters. In 2006, Carol and Sheila decided to move to Lewes. Carol says “While we miss the beauty of New England, we love living here.”

When they first moved here, Carol took quilting lessons with a neighbor and became an avid quilter—so much so that she has a 10-foot wide quilting machine in her basement. She spent much of her first five years involved in quilting activities until one day she realized she needed some intellectual stimulation. With that, Carol decided to take a graduate class at Delaware State University in Molecular Biology. She hadn’t had a science class in 40 years, and had no language/terminology in that area. She says she was “mute” for the semester. She told the professor “We didn’t even have genes when I went to school.” She loved every minute of it!! Carol applied, and was accepted in the PhD program in Neuroscience where she spent five years studying and working in a lab that worked on therapeutics for Parkinson’s disease. Once she was finished school, she realized there was really no where she could continue her research, and she didn’t want to teach.

Needing to keep busy, Carol is now a licensed real estate agent with Long and Foster in Rehoboth and works on a team with someone she has been friends with for over 25 years.

Carol and Sheila have two four legged babies (rescues). There is Vinny a Shi Tzu/Poodle mix, and a Chiweenie named Lucy in the Sky with Diamonds. The biggest (and probably most favorite) hobby for them is traveling. Their most memorable trips include: five bike trips and five hiking trips in Europe; twice to the Arctic on expedition ships; Africa three times, and a trip to the Galapagos Islands. Next up is a trip planned for 2018 to visit Israel and Jordan.

I began volunteering when we moved to Rehoboth in 2006.

I was a CAMP Rehoboth Chorus member. I have done a lot of volunteering with CROP as an usher for the Chorus, worked at the food bank, helped at Southern Delaware Therapeutic Riding, and gardening at the Lewes Senior Center. I have also volunteered for some of the mailing parties, and was the prize coordinator for the CAMP Women’s Golf League.

It would have to be volunteering at the Southern Delaware Therapeutic Riding. It was wonderful to see what a sense of empowerment this activity provides to their participants.

I always enjoy the CAMP Chorus concerts even though I am no longer a member. Starting at 24 members, now almost 90, this group continues to raise the bar, surprise, and delight.

Favorite season at the beach?

I love autumn the best. The weather starts to moderate as does the traffic. It is also the time when the “locals” specials start at the restaurants.
Name a childhood mentor who influenced you while growing up.

My junior year high school English teacher, Marya Markowski, opened up another world to this inner-city youngster by introducing me to Shakespeare, poetry, opera, and the love of learning.

Now that I am working again, that extra hour would come in handy for some aerobic exercise...an activity that seems to always fall to the end of the list.

Always an early riser—to bed at 9:30 and up at 5-5:30—not much fun at a late party! When I was younger and still going to the bars, I often arrived and left before most people got there.

This is a tough one, but one of the best was 2015. I was a PhD candidate working on therapeutics for Parkinson’s disease. My lab partner and I discovered the mechanism by which lithium, working in concert with a Parkinson’s drug, reduced the abnormal voluntary movements that many patients get from taking the drug. I also had two papers published in scientific journals…pretty heady stuff.

I came out at the age of 16, a time when gay bars were being frequently raided and the patrons arrested and charged with lewd and lascivious carriage. Friends lost their jobs and were summarily dismissed from the military. The injustices continued until not very long ago. Sheila and I have been together for almost 38 years. Moving to the Rehoboth area has allowed us to be more open than we ever thought possible. Getting married three years ago was a dream come true; we certainly never thought that would happen in our lifetime.

This president (not MY president), the administration, and congress scare the hell out of me. I certainly fear for my personal rights, but I am more concerned about the rights of my young, gay niece and her contemporaries and the rights of our brothers and sisters in the red states.
How long have you been coming to Rehoboth?

We are New Englanders. In 1989, Sheila took a job as the Human Resources Director at the Naval Academy in Annapolis. While living in Maryland, we met a number of women who had weekend homes here, and we started to come here to visit.

The traffic!! Also—when one would come here in the off season, most of the stores and restaurants in Rehoboth were closed. And, I recall there being only one supermarket.

First, meeting Sheila gave my life the consistency and calmness that I so lacked. Second, moving here has provided us a community and social life that has made our retirement years productive and enjoyable. Third, my wonderful niece, Jahnava, moving here two years ago provided me with a sense of family closeness and pride, and someone younger to do the heavy lifting when necessary.

I am forever thankful for our good health, wonderful friends, and fabulous memories. We believe our lives are made up of moments—Sheila and I have had many, many wonderful moments together.

We want to thank you Carol for your many years of volunteer service to CAMP Rehoboth. We are always amazed at the generosity of community members like you. Your dedication has helped CAMP Rehoboth continue to be the “heart of the community.”