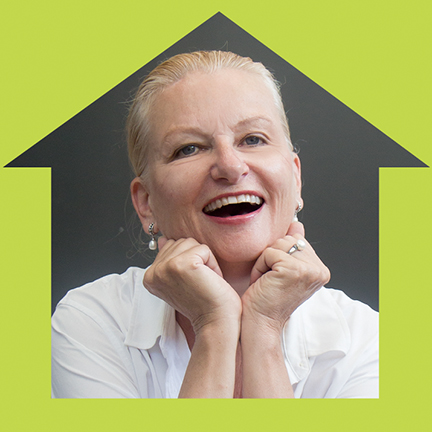 Sandra Skidmore’s father was in the military and she was born on a military base in Maryland. The family moved to Japan when she was five old and later moved to Europe where she learned to ride horses competitively. When her father retired from military service, Sandra and her parents returned to Baltimore, Maryland.

In September 1974, she began working for a major federal agency as a clerk and worked her way up through a series of increasingly responsible positions before leaving the federal service in 2011. With a steady day job to pay the rent, Sandra was free to explore many other opportunities.

She has walked the runway as a fashion model, been a makeup artist for video productions, produced fashion shows and events, been part owner of a retail store, and managed local Baltimore bands. When the AIDS crisis began, she volunteered with and was a board member of Moveable Feast, an organization that provided meals to homebound people with AIDS and their dependents. Sandra was the co-chair of the fundraiser “Dining Out for Life” during its first two years of existence in Baltimore, and served as the Corporate Chair for AIDSwalk Baltimore. She joined the Junior League of Baltimore and served as the Junior League of Maryland Delegate in 1998, receiving the Annapolis Bowl Award. As a longtime volunteer with the Maryland SPCA, before moving to Rehoboth full time, she founded and continues to support the Pippi Fund, which is named after a beloved pet and covers the cost of adoption for an animal chosen each month by the Maryland SPCA staff.

Sandra and her life partner Jonathan Handy just celebrated their 40th anniversary at the end of July.

It was so long ago, it’s hard to say. I have been volunteering with CAMP almost since the organization’s inception—more than 25 years (obviously, I was a mere child at the time).

Almost all of them through the years: Sundance, the Love Benefit, the Black and White Ball, the HeART of the Community Art Auction, the CAMP Rehoboth Follies, the Silver Anniversary Celebration, Mermaid Splash, Starburst Gala, the Bachelor Auction, Women’s FEST, the CAMP Rehoboth Chorus, World AIDS Day, the Block Party, and too many mailings to count. I’ve gained so many useful skills, such as learning how to fold hundreds of event T-shirts the proper way, setting up and taking down chairs for Chorus rehearsals, packing the CAMP van with hundreds of Sundance auction donations, and assembling and wrapping the large columns that greet Sundance revelers, just to name a few.

Well, certainly the funniest memory was when an internationally known female entertainer, who shall remain nameless, decided she needed to go shopping for expensive lingerie before the evening’s performance. When asked to pay for the items, her assistant kept telling the shopkeeper, “Don’t you know who this is? You don’t understand—she’s big in Europe!” (She paid.)

My favorite is one from the past—the CAMP Rehoboth Follies. It was just so much fun to put together a skit and perform for the community. The creativity was remarkable (and I still can’t get that picture of Steve Elkins in a pink tutu out of my head).

The fall, because the weather is still spectacular, the crowds have eased, the parking meters are off, and the CAMP Rehoboth Chorus starts rehearsing.

These days, I would be working on gathering auction items for Sundance 2017.

Early riser. I’m now waking up when I used to be coming home from the clubs!

It’s still to come (and I’m really looking forward to it)!

As a longtime ally of the LGBT community, I am overjoyed with the progress I have seen, but there is still a great deal of work to do. The current system of legal protection against discrimination based on sexual orientation and gender identity is a patchwork of state and local laws. There needs to be a federal non-discrimination statute that provides recourse to the federal courts. Yes, people can get married, but they can still be discriminated against, and lose their livelihoods because of who they are.

I’m concerned about the possible loss of rights and erosion of liberty for all of us, and if anyone needs an explanation, they haven’t been paying enough attention.

I have been coming to Rehoboth for more than 30 years. My life partner, Jon Handy, and I took summer shares in a beach house for 10 years, had an apartment for two years, and I bought my little house eighteen years ago. We now live here full time.

No favorites yet—still too many to visit—but I do love Sonoma.

Sandra, we are very blessed to have a volunteer like you that has been with CAMP Rehoboth from the start. Your dedication to CAMP Rehoboth for these 25+ years, and your willingness to do whatever is asked of you has helped to make CAMP Rehoboth what it is today.