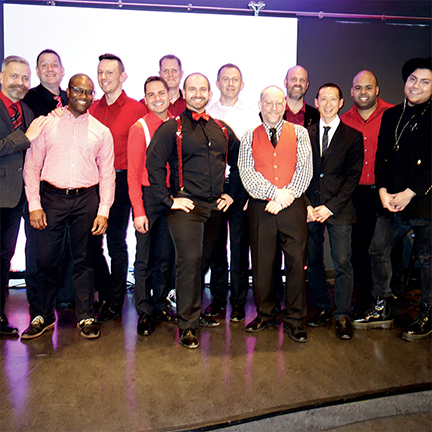 In what has become a winter tradition, members of the Gay Men’s Chorus of Washington DC returned to CAMP Rehoboth on January 14, with their new cabaret show Let’s Misbehave. In reaction to the hate language so prevalent during the 2016 election, members of CAMP Rehoboth formed a new Social Action Committee to provide outreach and education about civil rights. One of the first actions of the group was to be a partner with the new Delaware Civil Rights Coalition, designed to combat growing discrimination and hate in our country and state. For info about the Committee contact Barb Ralph. CAMP Chorus Concert is a Hit

January 27-29, the CAMP Rehoboth Chorus debuted its 2017 concert Come Fly with Me! at Epworth United Methodist Church. Their “musical journey around the world,” under the direction of Doug Yetter was a tour de force—without all the hassle of travel! Crowd favorites included “Jai Ho” and “You Can’t Take the Color out of Colorado.” Come Fly with Me! returns with a final showing on April 2, at 3 p.m. at Delaware Tech. “CAMP Rehoboth depends on the support of our members and the wonderful partnerships we have with local businesses,” says CAMP Rehoboth Executive Director Steve Elkins (right), as he receives checks from Jeanine O’Donnell of State Farm and Lynne Maloy of Unfinished Business (a local thrift store that works with CAMP volunteers and donors). Also shown: Monica Parr, Kathy Wiz, and Alexandria Maloy. During its winter break, Letters from CAMP Rehoboth was once again on the move. Dana Goldberg and Kris Martino posed with it at Club Med Ixtapa Pacific in Mexico. Then it was on to Paradise Cove, Oahu, Hawaii with Maggie Booth, Jan Johnson, Darleen Kahl, Susie Poteet, Barbara Lilien, Pat Morgan, and Minnie Larosa. Phil Fretz carried it to Havana, Cuba. While in Topanga Canyon, California for the holidays with Kathy Wiz and Muriel Hogan, it was enjoyed by Zion Hogan, who apparently has really good taste in reading material. Finally, it joined Vicki Martina and Nancy Hewish in Reykjavik, Iceland.