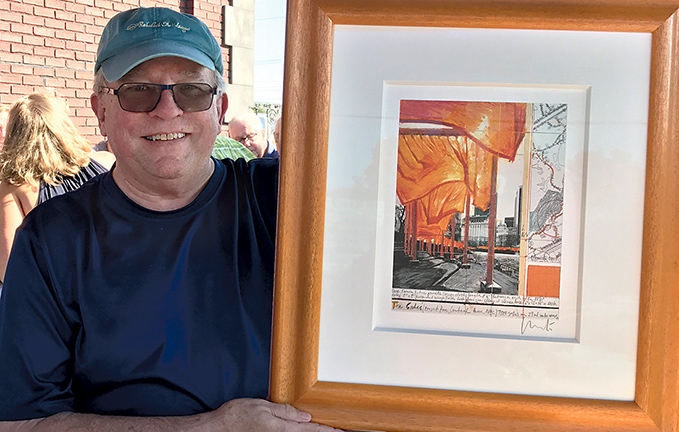 Vermeer didn’t need an engineer to paint the Girl with the Pearl Earring. And Picasso didn’t have to hire architects and navigate public hearings to create Guernica. In stark contrast, Christo and Jeanne Claude spent 26 years preparing for the legendary The Gates in Central Park before it’s spectacular unveiling in 2005.

Lee Mills is mesmerized by this duo’s decades-long commitment to produce their public art: “For me, The Gates Project was an opportunity to experience first-hand the work of Christo and Jeanne Claude, whose collaborative work I had long admired, respected, and found infinitely engaging. In its conceptual essence, it was razor sharp and focused—which made it superior in my mind. The sheer scale of their projects create undeniable and audacious visual experiences. But more importantly for me was the gift of their conception, which was this abiding afterglow which celebrated our world itself and its environmental challenges as manifest by their choice of sites.”

Charlie Guerin, director of the Biggs couldn’t agree more. He was fortunate to meet the couple in 1978 and is responsible for bringing the exhibition to Dover. “I met them after the Valley Curtain installation in Colorado and worked with them as an exhibition designer as they traveled the documentary to museums around the world. The exhibitions documented the planning with architects and engineers and the actual cloth and steel used for their art. Visitors are amazed by the sheer size of the projects, and the time commitment each took.”

Mills reflects further on his day in Manhattan: “The Gates brought to Central Park an especially revealing opportunity. As a place, the park has seemed very familiar to many of us—for many years—over many visits. But The Gates exposed the park’s many secrets—nooks, crannies and outcroppings—all along the way. Things we had never quite seen before glowed in banner presentations—one upon another. Indeed the huge range of topography itself was highlighted, revealing what an incredible landscape this urban wonder truly is.

“New York City is a great American mecca—even as it is a superb global destination. The park was full the weekday I visited, and it took some time for me to adjust to the dazzle and glow of a breezy chill with sunlight reflecting off an earlier snow storm. Like NYC itself, I felt myself tapping into the energy of the park that specific day, and I was off on a great adventure. After a time all the visual impulses I felt yielded to the aural as well, and I became aware that English seemed something like a second language of the day. French, Japanese, Chinese, and other languages were being spoken in equal measure. The chorus of voices was like a song of The Gates—an anthem to a unique and unforgettable experience.

“Soon thereafter, I had the opportunity to purchase a signed piece (pictured above) It has been a wonderful addition to my collection of art. Modest in size, it carries the enormous import of the event. In its precise declination of one specific gate, it represents them all. And it carries me back to that magical day. Like all great works of art, it also conveys and reinforces the broader and deeper meaning of the project—a respect and tenderness for this amazing world—and our necessary commitment to our stewardship.”

Christo and Jeanne-Claude’s monumental art installations have included works such The Umbrellas from the U.S. to Japan, Berlin’s Wrapped Reichstag, and the Wrapping of Pont Neuf Bridge in Paris. But east coast residents flocked to the geographically desirable Manhattan for The Gates.

Howard Menaker and Patrick Gossett were likewise impressed. “In addition to being a visual joy, it was so great to see kids throughout the Park, sketching, coloring, and talking about art. They were learning that instead of just being something confined to a museum wall, art was all around them.”

On the subject of igniting creativity in kids, Marjorie Buchanan, a volunteer at the Lewes Public Library, has a unique connection to the work. “Back in 1983, in Philadelphia, I went to pick up my son Garrett from third grade, and his art teacher had wrapped the entire playground in homage to Christo and Jeanne-Claude. I stood there with all the other parents, in awe of the spectacle.... From that moment forward, Garrett and I have followed this incredible couple. Every child—and parent—should have such an infusion of art that ignites passion and creativity.”

Don’t miss this insider view of the most spectacular outside art in our lifetime. August 4-October 22 at the Biggs Museum in Dover.