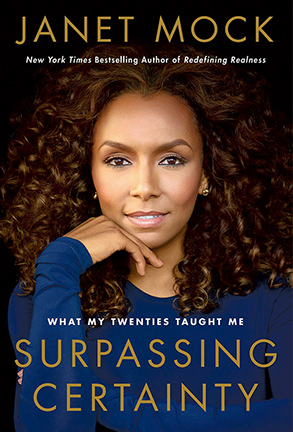 When you were twenty, you wanted only to impress.

If people looked at you, wasn’t that good? You wanted to be seen, watched, adored by those you saw as desirable. But what, exactly, did you want people to notice? Was it your hair, your body or, as in Surpassing Certainty by Janet Mock, was the whole you on display?
At age nineteen, Janet Mock should never have been where she was, three nights a week.

Her Thursday-through-Saturday schedule was meant for women over 21; that was the legal age for dancing as a stripper in a Waikiki club, but the proprietress of the club jokingly offered to “give” Mock two of her own birthdays, and that was that: Mock was a dancer, albeit a self-conscious one.

She was afraid that someone could spot her secret from the bar rail.

At a very young age, Mock knew she was a girl in a boy’s body. Her mother looked the other way while Mock wore feminine clothing and grew out her hair, and she ignored when Mock started taking female hormones as an adolescent. After saving every penny, Mock flew to Bangkok to finalize her transition at eighteen; months later, she realized that nobody saw her as anything but a pretty black woman.

But the club, well, money was good there and she settled in. She sometimes made a cool grand a week, and she didn’t have to sleep with customers; the club’s owner, in fact, urged her girls not to do so. “Love can wait,” she’d said, but when Mock met the man she’d ultimately marry, there was no reason not to take the plunge.

He was a Navy man who took Mock’s truth in stride, but the two grew apart: Mock quit dancing before she quit the marriage to move to New York City to attend college, where she felt empowered as a woman in control of her life. She made friends, decided what she wanted to do with her life, landed the job of her dreams and, “I was home.”

Filled with florid prose and swoony drama, Surpassing Certainty is one of those memoirs that feels like a long conversation.
That can be a good thing, and it can be bad.

In speaking directly to readers, author Janet Mock offers an aura of girlfriendship. We’re privy to many details—maybe even too many—and the information is meted out as if we’re all Sex-in-the-City in a bistro somewhere on a Sunday afternoon.

And yet, this conversation doesn’t seem to have a point. Mock writes at great length about stripping. She tells about her many loves, fusses too much about her appearance, and shares thoughts about men that reflect her youth at the time. Except for a juicy admission of omission in her last book, this seemed like a lot of navel-gazing.

If you read Mock’s first memoir and are eager for more, by all means, find this one because you’ll love it. For most readers, though, Surpassing Certainty may not completely impress.