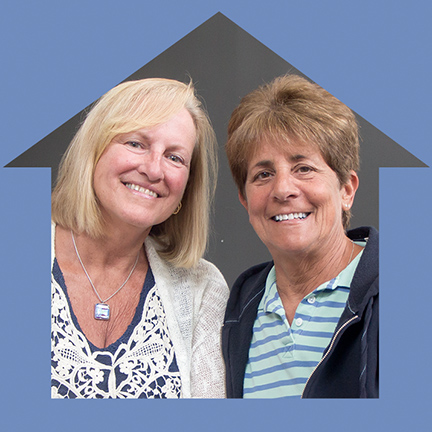 Sue Gaggiotti and Donna Ohle have been together over 35 years. They met in early 1980 through a mutual friend. They did not spend a lot of time together socially; but, they did see each other on occasion at different functions. They got to know each other a little better while playing on the same team in a recreational soccer league. In the fall of ‘80 they both attended a Halloween party and have been together ever since.

Sue is from Bridgeton, New Jersey. She attended Immaculate Conception School through eighth grade, before going to, and graduating from Bridgeton High School in 1973. After graduation, Sue moved to Trenton, New Jersey to attend Trenton State College (now The College of New Jersey), graduating in 1977 with a degree in Business Administration. For 31 years Sue worked for the State of New Jersey’s Department of Treasury in Contract Administration, retiring in January, 2011. Sue has one sister Linda (Bob), a niece and a nephew. Her hobbies include playing pickleball twice a week at Sawgrass, gardening, walking, watching Pittsburgh Steelers games, and hanging at the beach whenever possible.

Donna was born in Newark, New Jersey, and at the age of six months, her family moved to Mt. Holly, New Jersey. The family lived there for seven years before their final move to Hightstown, New Jersey where Donna graduated in 1974 from Hightstown High School. After high school, Donna attended Trenton State College (now The College of New Jersey), graduating in 1978 with a degree in Physical Education. In January, 1979, Donna was hired as a Health and Physical Education Teacher for the East Windsor Regional School District at her old alma mater, Hightstown High School. She retired in February, 2011 after 32 years of service. Donna has two sisters Bobbi (Dennis), Colleen (Tice), two nieces, and two nephews. Her many hobbies are playing pickleball twice a week at Sawgrass, tap dance, bowling, crafts, and gardening.

Sue and Donna purchased their home in Rehoboth Beach in 1998. Knowing they were about to retire, they did a major renovation to the house in 2010. In May 2011, they moved to Rehoboth permanently. This year on Halloween, they will celebrate their 37th anniversary.

We started volunteering in 2011 at the New Year’s Eve Starburst Gayla.

We have volunteered at the Starburst Gayla, Women’s FEST, Sundance, and with a lot of CAMP mailings.

Our best memory of volunteering for CAMP Rehoboth is the Starburst Gayla; seeing the Convention Center transformed into a wonderful dance hall.

Our favorite event is the Women’s FEST Broadwalk on the Boardwalk. It is a wonderful turnout to support all of the women who fought cancer and won, and also to remember all of our loved ones who have passed from such a horrible disease.

Favorite season at the beach and why?

Sue: Summer’s my favorite season anywhere. I’m a beach bum from way back. I know it’s a little crazy in the summer, but the tourists help our economy.

Donna: I enjoy all of the seasons.

Name a childhood mentor or someone who influenced you growing up.

Sue: Definitely my dad. He instilled in me to always be an honest and sincere person; to be compassionate to people, but be strong; and, always treat people the way you would want to be treated.

Donna: Ed McCall, my Supervisor at the YMCA. While working for him at the YMCA, he would always tell me how well I worked with children, and he influenced me to become a Health and Physical Education Teacher.

Sue: I would go to the beach or work outside.

Donna: I would work in the garden or play on my iPad.

Our favorite city is Pittsburgh. They have great restaurants, shopping, museums, and it’s an awesome sports city. We have gone to several sporting events and always spend a few extra days tooling around the city.

Sue: I am an early riser.

Donna: I am a night owl.

We both agree that 1980 is the best year of our life. That is when we met and started dating.

Sue: My favorite holiday is Christmas. I love decorating and going out at night to see all of the Christmas lights and decorations.

Donna: My favorite holiday is Thanksgiving. It is the beginning of the holiday season which we love.

Given the new political climate, are you concerned about the possible loss of rights for the LGBT Community?

We are both always concerned about the possible loss of rights, but feel that the new political climate is in the minority. But, never forget there is still a lot of work to be done.

We have been coming to Rehoboth since 1980.

The biggest change is the amount of tourists visiting this area, and traffic, traffic, and more traffic.

Name three events that you feel have shaped your life.

Number One is our lives together. We have been together for almost 37 years. Number two is the birth of our three nieces and three nephews. Number three is our move to Rehoboth Beach.

We are both most thankful for our health, family, good friends, and most importantly each other.

Sue and Donna, thank you for your continued support, and for volunteering for the many events here at CAMP Rehoboth. Dedicated volunteers like you are what make CAMP Rehoboth successful. We hope that you know how much you are appreciated by all of us at CAMP Rehoboth. See you at the next event! 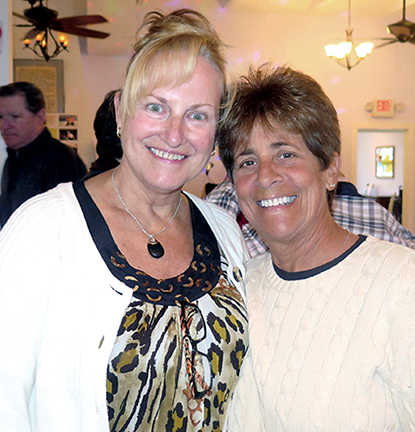