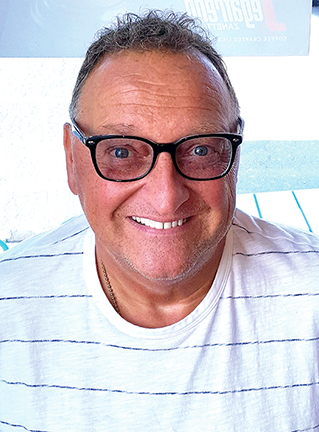 Michael Gaudioso: Beauty at the Beach

Spending just a few minutes with Lewes resident Michael G. (as he’s commonly known), it’s easy to see why he was drawn to a successful career in sales: he’s a natural, very people-oriented person, eager to help people achieve their dreams.

Now he spends his time living life to the fullest at the beach. But to fully understand what makes him tick, we have to start at the beginning.

Born in Ridley Park, PA, and raised in Upper Darby Township, Michael is the youngest of four siblings. Michael’s dad worked as a truck mechanic for Mack Trucks and his mom worked for many years at a toy factory in Conshohocken, PA. Michael attended Upper Darby public schools where he briefly flirted with musical theater with the lead role in a sixth grade play. He was also a choir boy at St. Mark’s Episcopal Church in Philadelphia.

Like many working class families in the Philadelphia suburbs, money was tight and Michael started working after school at age 15 to help the family coffers. He first worked at a record store where “I sold penny candy, 45s, and car models,” and later at the local corner grocery store. He sold clothing at Ripley’s in Upper Darby’s 69th Street shopping district, home of the famed Tower Theatre.

After graduating from Upper Darby High School, Michael worked in retail at Clover Department store, a subsidiary of the iconic Philadelphia retailer Strawbridge and Clothier. He then transitioned into the airline industry, working first as a reservation specialist for Altair Airlines, then Summit Air Freight as a forklift operator.

“When asked if I could drive a forklift, of course I said yes, even though I had never driven a forklift,” Michael said. Summit quickly realized his lack of forklift experience when he drove inside a truck and couldn’t get out. After a quick lesson, he learned how to operate the vehicle and continued his air freight career accident-free.

In the early 1980s, Michael embarked on a career change, working as a corporate accounts specialist at Rosenbluth Travel. He also began a part-time bartending career, first at MSA Club/CR Bar in Millbourne, PA, outside of Philadelphia, and eventually working at The Renaissance, an LGBT bar in Wilmington.

His first exposure to the Delaware beaches came when the manager, Ronny, took a small group of co-workers to Rehoboth for a weekend. “Being from the Philadelphia area, my only beach experience was the Jersey shore; I had no idea Delaware even had beaches; it was love at first sight and I had so much fun. I was amazed at the beauty and simplicity of the Delaware beach area, and would come back every year,” Michael remarked.

In 1987 he made another career change, based on the recommendation of a friend who said he would be a perfect fit for a career in sales, specifically salon-exclusive professional beauty products. His first job was with Paul Mitchell, as a salon product representative. “I just loved the work, the relationships with people, and knew this was where I belonged,” said Michael. His work has taken him all over the world, with some notable companies, including Wella, Sebastian, Proctor and Gamble, and Graham Webb where he was also a motivational speaker and trainer for stylists.

During this time he also took care of his ailing mother until she passed away.

The path to the beach began in 2007. Michael was working for Proctor and Gamble as a salon representative and his territory included Delaware. “I had just been approved to buy a house in Philadelphia when my good friend Betsy Ross said to me ‘you should move to the beach.’”

A series of events led him to believe he was destined for the beach life.

“I met Linda Bova, and she found the perfect house for me in Lewes. I had to get approved again for a mortgage since my PA mortgage broker was not licensed in Delaware; I met Viki Dee, who was a mortgage broker at the time and she made it happen for me.”

A bidding war erupted with three other parties for the house Michael wanted; Michael’s offer was the winning bid. “I knew this was meant to be when I walked into the bathroom of my new house and there were two tiles that had ‘Puerta Vallarta’ written on them, my favorite vacation spot of all time. I knew I was meant to be here.”

Things got off to a rocky start; first a cancer scare and then he was laid off from Proctor and Gamble. Michael quickly rebounded, is now cancer-free, and is employed with Beauty Scope of Sterling, Virginia where he is the Sales Consultant for Delaware and the Eastern Shore of Maryland.

Michael’s inspiration comes from people. “I have always been a ‘people-person.’ I love interacting with people and I especially love helping people, whether it’s helping one of my salons find the perfect product for their customers, or helping one of my close friends paint their house.”

Michael’s passions include home décor, live music, and he enjoys karaoke with his close friends. “After surviving cancer, I wanted to really live life to the fullest. My good friend Jill Brady and I became karaoke partners, and just going out on the town and singing brought me back to life.”

Although Michael is king of his castle, he wants everyone to know that “the real bosses of the house” are his cats Lewey Pauper and Jada Princess.

Thank you Michael for bringing beauty to the beach.