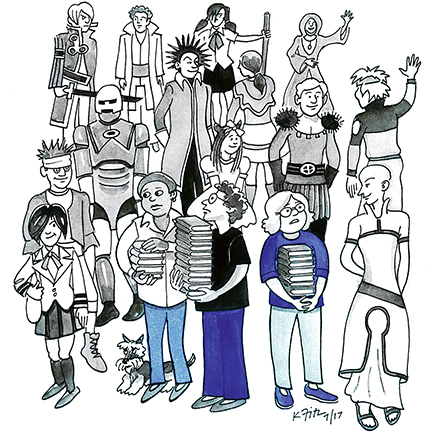 From the Sublime to the Exceptionally Ridiculous

I just returned from a writer’s conference in Chicago, and I’m still laughing. That’s because the Crown Plaza Hotel boasted one of the most hilarious juxtapositions of conference-goers ever.

Picture 350 lesbian writers, publishers, and book lovers lodged in a building with hundreds of young people gathered for the 2017 Anime Midwest Con—which mercifully took place at the hotel next door.

If, like me, you never heard of Anime or the convention, here’s a primer: It’s all about Japanese animation. And Anime Midwest is a three-day cosplay convention, drawing 15,000 (yes, thousand) tweens, teens, and young adults (and I use the word adult advisedly) focusing on video gaming, Japanese animation characters, ancient sword-fighting techniques, and Japanese comic books.

Oh, if you are old-nerdy like me, not cool-nerdy like anime fans, cosplay is short for costume-play. And the players consider it performance art, with their guns and swords and capes and scantily-clad housemaids. There’s a whole category of furry animals, too, which I understand can lead to very naughty role-playing.

Everybody dresses up, dances to nerdcore hip-hop music (okay, I don’t know what that is), drinks unlimited free Mountain Dew, eats buckets of free ramen noodles, and behaves pretty much like you’d expect costumed 15-25 year olds to behave. It speaks to the crowd that anyone over 40 gets a senior discount and each hotel room houses at least four fuzzy ducks, warrior princesses, Samurai Swordsmen or darkly evil creatures.

From the evil Monster Hunter and Dragon Maid to Lollipop Chainsaw Man and the Reaper, this was a true geek chorus. Very Rocky Horror. With all the spandex, wildly colored wigs, plastic weaponry, and lace-up bodices it looked like a gay dance club married a Halloween pop-up store.

Many of the female costumes reminded me of Xena, the Warrior Princess, with young women in cinched-waisted, low-cut outfits, and thigh-high faux-leather boots. They got a lot of attention from our crowd.

The night of the Anime Formal Fantasy Ball coincided with the Literary Society Awards Ceremony. Coming down from the tenth floor, I wound up in the very back of the elevator with four beautifully tuxedoed butch women (two with almost-shaved heads), and several formally dressed lipstick lesbians. We stopped at the ninth floor to pick up two portly furry skunks, a six foot tall warrior of indeterminate gender, two hand-maidens (also with creatively shaved heads), and a person in a medieval helmet so gigantic it required him to ride the elevator with bended knees.

And the elevator was so slow, we rode in silence at first, then a hand-maiden giggled, everybody looked around, gawking at everybody else, and by the time we got to the lobby, the entire car was in full-out guffaw.

The great news was, that throughout the weekend, our two radically different convention groups got along famously. There is hope for the future.

Not so much for the hotel’s sprinkler system. It was battered so often by huge headgear, humongous high hair (not from the lesbians) and much shoulder-top weaponry, signs had to be posted—ANIME CARTOON CHARACTERS, WATCH OUT FOR SPRINKLERS. Apparently, one incident set off the sprinkler, and almost drowned a flying pig.
Not to revel in the absurdity alone, I am happy to report that the Golden Crown Literary Conference was splendid, with many well-known writers giving master classes, lots of wonderful readings, and a great opportunity for book sales and networking.

I was especially honored to meet, and get to interview, writer Lillian Faderman, who was at the conference to receive the GCLS Trailblazer Award. You may recall her non-fiction books Surpassing the Love of Men (1981) and Odd Girls and Twilight Lovers (1991), both amazing lesbian histories. She recently published The Gay Revolution, a remarkable history of the gay rights struggle in the U.S. She’s a lovely person, a marvelous historian, and I was thrilled to meet her.

The keynote speaker was Leslea Newman, author of the ground-breaking Heather Has Two Mommies. She told tales of the incredible discrimination she faced upon publication of that book.

Meanwhile, back at the elevators, following our book awards ceremony, and a great gathering of Cosmo drinking authors in the bar, we headed upstairs to call it a night.

Up on the tenth floor, outside the elevator, we found a furry squirrel, and a fuzzy duck, locking lips and involved in more than mere cosplay. Is that what too much Mountain Dew can do?

We writers scurried off to our rooms, filing our observations for use as future story fodder.