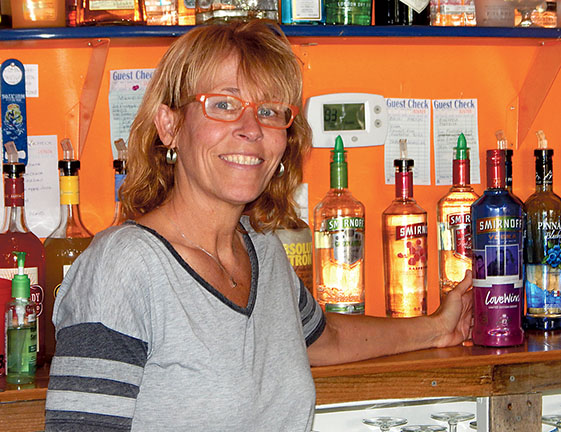 Helen Fausnaught: Living The Swell Life at the Beach

If you ask Helen Fausnaught, owner of The Swell Tiki Bar & Grill on Rehoboth Avenue Extended, about her last name, without hesitation she will tell you it’s German for “Donut,” and she embraces that meaning by referring to herself as “Helen Donut.” She also wants people to know she is not related to the family that owns Funland!

Born in Danville, Pennsylvania in Montour County, Helen and her older sister were raised by devoted parents. Helen’s mother spent 48 years employed at Greisinger Medical Center. Her father worked locally for the Pennsylvania Department of Transportation (PENNDOT) in both road construction as well as driving the large snow plow trucks.

A three-sport star at Danville High School, Helen played softball, basketball, and field hockey as well as Little League Baseball, and was the first female to make the All-Star team. A softball scholarship to Bloomsburg University awaited her; but alas, a torn ACL suffered playing basketball in her senior year derailed those plans.

She did attend Bloomsburg and made the softball team as a walk-on, supporting herself during college by bartending and bar management. Helen graduated in 1990, majoring in Communications and Business. Upon graduation, Helen relocated to York, Pennsylvania, and soon discovered she had a “great passion for the potential of property.”

A real estate firm from Maryland had just opened an office, O’Connor, Piper & Flynn, and within five years Helen achieved Rookie of The Year status and was a consistent top producer. She obtained her broker’s license and, five and a half years after entering real estate, opened her own office Classic Real Estate, which she operated for 17 years.

Along the way, she also acquired her Pennsylvania Auctioneer’s license and was certified to conduct auctions. But something else began demanding her attention: starting a family.

Unable to have children of her own, Helen became an adoptive parent, providing a home for two little boys nine months apart in age. Her successful real estate career was the conduit to Helen being able to be a stay-at-home mom for her boys, as she could list and sell homes part-time, and still be a full-time mom—as well as a varsity softball coach at Eastern York High School.

Helen’s significant other was and still is employed by the Pennsylvania education system. Life with the kids was good, at first. But then her children began experiencing various forms of discrimination, both in the community and at pre-school due to their brown skin, Helen began to wonder if a change was in order.
“I’ve always wanted to live at the beach,” Helen said. She discovered a property for sale in Sussex County, and in 2011 bought it for a vacation home. But then, as Helen got to know the community and the area, she decided to move to the beach full-time.

“Growing up, we were always very connected to our neighbors and their kids. I find the Rehoboth area to be such a welcoming and peaceful place. The minute you cross that bridge, your entire being changes. I call this my heaven on earth.”

Relocating to the beach, Helen joined the Keller-Williams office on Coastal Highway in Lewes. But again, something else was calling.

“My father was never overly effusive in his praise-of anyone,” said Helen. “But one thing he always said to me was ‘nobody works a bar like you do.’ I’ve always been a people person. Real Estate is a people business, which is what attracted me to it. The bar business is also a people business. I decided I wanted to open a bar, and create a place that is cool, soulful, and features live music. I’m a big fan of music, as it really touches my soul.”

When the bar, formerly known as Big Sissies, became available, Helen jumped at the opportunity, and through hard work and determination The Swell Tiki Bar was born in 2015.

An immediate success, trouble soon followed. A few months later the bar suffered a setback when an overnight fire destroyed the interior right before Labor Day weekend. But Helen and The Swell persevered, and, like a phoenix, The Swell rose from the ashes to become even better than before.

I asked Helen, “What inspires you? “

“Tony Robbins,” she said. His message of health and energy, overcoming fears, persuasive communication, and enhancing relationships has been a guiding light for me.” In 2015 Helen became an ordained minister, and has officiated at weddings and other ceremonies in the area.

What does Helen want to be remembered for?

“I believe I was put here to connect and serve others, and I always try and make my contact with people to be as pleasing and uplifting as possible.”

You can find Helen behind the bar or hosting at The Swell most every night. And we’re thrilled she’s at the beach.